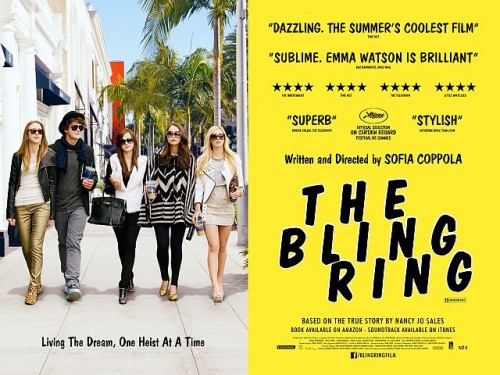 The first thing I would like to say about ‘The Bling Ring (directed by Sofia Coppola) is that I expected so much more. I had anticipated this film so much after seeing Emma Watson’s pictures posted on twitter, and I eagerly awaited seeing her play bad girl Nicki to be perfectly honest. I am part of the ‘Harry Potter Generation’. We grew up with Daniel Radcliffe, Rupert Grint, and Emma Watson, idolising them, some perhaps worshipping them (I wouldn’t go that far but, you know, some would). Placing our good girl Hermione into a set of bad girls excited me.

Before I start, I do not want to be misunderstood. I am not disputing the acting skills at all. Katie Chang played the celebrity-obsessed Rebecca with great conviction, while Israel Broussard gave an excellent performance as Marc, the cross-dressing “best friend” of the conniving Rebecca.

I just wasn’t fully convinced by the actual film itself. The trailer for the film intrigued me but I came to the conclusion, after watching the film, that it was basically just an extended version of the trailer. Hardly anything else happens. Now, I understand that ‘The Bling Ring‘ was based on a true story, but I can’t help but feel like there could have been more to it. Perhaps an added twist on the original story would have helped this film, but in my eyes, they didn’t pull it off. It may have been a good film adaptation of the actual scenario, but it did not entertain me as a film. My sister and I sat waiting for something more to happen. Nothing came. In fact, to us, the ending came unexpectedly. We found ourselves asking “Is that it?”; not something you should be saying after watching any film.

I don’t mean to be harsh, and I appreciate the work that goes into making any film, but I just was not impressed by this film. As I said, I was constantly waiting for something else to happen, for there to be a twist, for something to go terribly wrong and for our protagonist to go through the battle of their life to make the world right again… But no.

Want my advice? If you’re interested in films that have a plot that consists of something more than spoilt teenagers partying with stolen goods, I’d advise you to look elsewhere. Otherwise, this is the film for you. It just wasn’t for me. Sorry, Emma!