‘DELIVERY MAN’ – Does It Come With A Return Policy?

Seeing Vince Vaughn play a underachiever is nothing new. However, not seeing him make this archetype an endearing, loveable disaster, is something we don’t expect.

In his most recent film, Vaughn shows no trace of his trademark talent. If you go to see ‘DELIVERY MAN‘ expecting at least one or two classic Vaughn sharp-shooting, wildly comedic and random monologues, you will be left empty-handed. In fact, even Vaughn seems bored with the lack of action in the story. 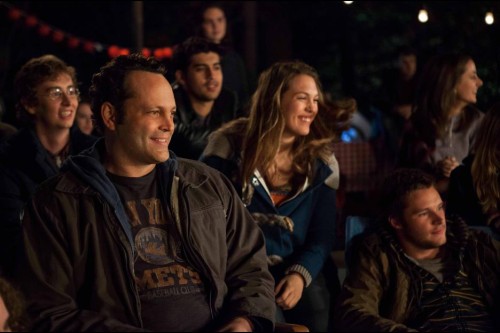 The plot moves around David Wozniak’s (Vaughn) haphazard life decisions and the predicaments they create. Nearly 20 years prior, Wozniak spent a 33 month period frequenting a sperm donor clinic. During that time he made 633 visits, which apparently results in his fathering of 533 children. We learn early in the movie that 142 of these children are now suing him in order to find out his identity, as the “donations” were all made via an anonymity contract.


Adding to this predicament is the fact that Wozniak is being chased by the mob for an $80,000 debt and his girlfriend has just declared that she’s pregnant. The stage is set for a hilarious mix of verbal puns and innuendos, but unfortunately they come few and far between. In fact, the movie is much more of a drama than a comedy. 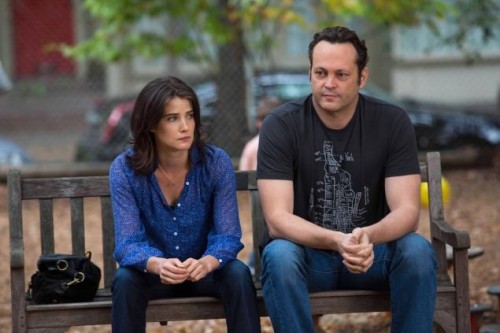 One would think that since this is the second go around on this story for director Ken Scott, that the film would be a smashing success. Yes, that’s right. ‘THE DELIVERY MAN‘ is a remake. In 2011 Ken Scott wrote and directed ‘STARBUCK‘, which essentially is the francophone original.


Chris Pratt plays Brett, a close friend of Wozniak’s who is also doubling as his haphazard attorney. Pratt adds a bit of shimmer to the screen, as does Cobie Smulders from the American sitcom ‘HOW I MET YOUR MOTHER‘.

What I absolutely enjoyed the most in this film was the set design and props. With a story focused on the outrageous abundance of a situation, the set designers rose to the occasion. Both Dave Wozniak and his friend Brett live in homes that are ridiculously cluttered. There seems to be stuff spewing from every edge and wall of every room. When Wozniak isn’t at one of these locations, or spying on his children, he can be found either surrounded by big slabs of meat in his father’s market or driving a delivery truck stocked full of raw meat. The visuals are puntastic!

While the film as a whole does makes a sentimental statement about fatherhood, if you’re a devout Vince Vaughn fan like me, you might feel ‘DELIVERY MAN‘ is a bit anti-climactic.

Melanie Todd has lived in Florida, New York and London. She has experience with NBC News and Universal Studios. Currently, she is in the US preparing for a move back to London, where she hopes to work in entertainment publicity/public relations. Melanie enjoys running and drinking wine, but of course, not at the same time. Follow her on TWITTER @MelanieTheRep and visit her blog at www.WhatTheRepShouldDo.com
NEWER POSTThe X FACTOR Blog – Week Nine. The SEMI-FINAL!
OLDER POSTTHE AMAZING SPIDER-MAN 2 – Brand New TRAILER!