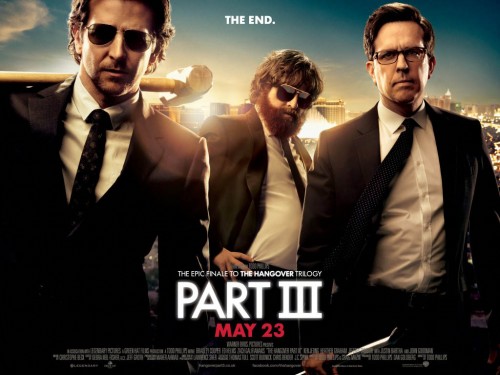 Hangover III – unlike Hangover II – isn’t predictable; that is a rare joy to behold in comedies now a days. At first I was skeptical about watching it, as sequels hardly live up to the high standards the first films set. I’m glad I still gave it a chance though.

A subtle change in the plot pattern – combined with many twists – was all that took to spice things up, and bring some originality to the Hangover franchise. Not to worry though, the film remains loyal to its best features. This time the narrative doesn’t focus on the consequences of the morning after; instead it portrays a sober version of the wolf pack as they run against time to retrieve their friend, through capturing Mr. Chow.

Zach Galifianakis is at his best here. If you loved him in the Hangover and Due Date, you’ll have a blast watching Hangover III. The space given to his character is quite big, and he makes excellent use of the opportunity. However, this leaves very little space for Ed Helms (Stu) and Bradley Cooper (Phil) to shine as comedians, which is a bitter disappointment considering how talented they were in the first Hangover. 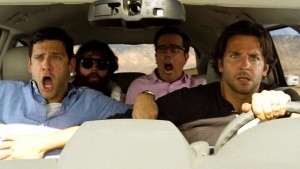 Many critics argue that there is too much action, and hardly any comedy. I strongly encourage you to not be put off by these comments. Yes there is a lot of action which is new to the Hangover films; but – and that’s a big but – all the action did come wrapped on witty jokes and sheer weirdness – the latter mainly on Alan’s part – hence it seems unfair to undermine the film for its action, as it still delivers what its genre promises: good quality humour.

This new dynamism wasn’t present in the previous films, but if anything, it’s a bonus. No valuable screen time is wasted, the story begins when it’s actually supposed to begin, and the fast pace will keep you engaged throughout the whole ride.

For a sequel, Hangover III is pretty decent; it seems to fix the bad impression left by its predecessor. On the other hand, if you watch it whilst comparing it to the first Hangover, then you’ll most likely be disappointed. The events do come across funnier, fresher and more original in the very first film, as unfortunately the magic does fade in sequels.

Leticia - mainly known as Tish - is a journalism student based in London, who adores films and tv series. She always keeps up to date with the latest releases, but pays special attention to Thrillers and Dramas. She loves to discuss culture in general; and gets really psyched when she finds new talents on the big screen.
NEWER POSTNOW YOU SEE ME – Magically Spellbinding Or Camera Trickery?!?
OLDER POSTMAN OF STEEL – Certainly packs a few punches!