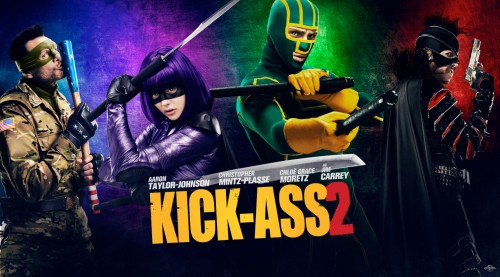 I cannot express how much I loved this film. I knew that I was bound to – I thought the first movie was amazing. And number two was just as good, if not better!

So Dave Lizewski has just become ‘Kick-Ass‘, the first ‘superhero’ in his town, encouraging others to put on masks and fight crime. He joins a group of vigilantes called Justice Forever, taking on dangerous mob leaders. But someone else is also creating their own group. Chris D’Amico labels himself the world’s first supervillain, The Motherfucker, and brings together his own band of evil supervillains, aiming to kill Kick-Ass for killing his father. Meanwhile, Hitgirl has retired her life of fighting crime to become a girly-girl, who goes out on dates and sits with the popular girls at lunch, despite Dave’s pleas for her to join Justice Forever.

The film is equipped with laughs the entire way through, and to complete the supervillain style, The Motherfucker has his own evil lair in a warehouse complete with a shark tank, and flashy cars. I appreciated Jim Carrey’s performance as Colonel Stars and Stripes, and Donald Faison’s hilarious character Dr. Gravity, but for me, once again, Chloë Grace Moretz stole the show as the hilarious Hit-Girl.

I would definitely recommend it!