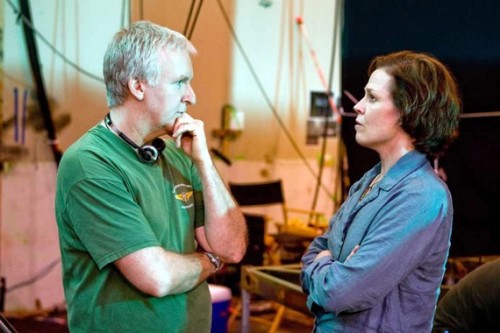 James Cameron has managed to persuade Sigourney Weaver to return in for three ‘AVATAR‘ sequels, scheduled to begin production later this year! She will join previously announced cast returnees Sam Worthington and Zoë Saldana. Stephen Lang will also be returning, even though both her character and Lang‘s died in the first ‘AVATAR‘ movie – Hollywood’s highest grossing flick ever!

Speaking about her return, Cameron said:

“Sigourney and I have a long creative history, dating back to 1985 when we made Aliens.

“We’re good friends who’ve always worked well together, so it just feels right that she’s coming back for the Avatar sequels. Her character of Grace Augustine, as fans know, died in the first movie, so she’s playing a different and in many ways more challenging character in the upcoming films.

“We’re both looking forward to this new creative challenge, the latest chapter in our long and continuing collaboration.”

The untitled ‘AVATAR‘ sequels will be filmed back-to-back, with the first follow-up being released in December 2016. The second sequel will follow in December 2017, and the third a year later.

I’m already intrigued as to what form Weaver‘s role will take. As we all know, in Sci-Fi anything can happen!

Ed is an entertainment news writer, and founder of TOMORROW'S NEWS. He always keeps a watchful eye on who and what's trending in the entertainment world. His articles focus on tomorrow's news today, including celebrity news, film news, music news and so much more!
NEWER POSTTHAT WAS THE BOX – June 2014 (Week Two)
OLDER POSTTHAT WAS THE BOX – June 2014 (Week One)