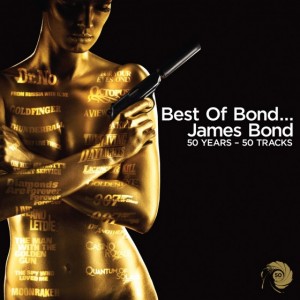 Now that James Bond fans have fully digested Adele‘s ‘SKYFALL‘ theme tune, and listened to the latest collection of James Bond theme songs over and over again, my thoughts moved onto the tunes which either didn’t quite cut the mustard, or were “shaken but not stirred” from the memory of the masses.

So here’s my run-down of the James Bond themes (and “rejected” ones) which I think deserve another massive shout-out!

1. Forever (I Am All Yours) by Eva Almér

This song was reportedly submitted as a potential theme for ‘Quantum of Solace‘, but we now know the gig went to Alicia Keys and Jack White with their track called Another Way To Die. But does Eva‘s track sound much more like a Bond theme? Did producers decide to go with an artist or artists who are “trendy” at the time? While I do like Another Way To Die, I much prefer Eva‘s theme. What do you think?

Want to know what Forever (I Am All Yours) looks like in the opening credits? Click here to find out.

2. No Good About Goodbye by Shirley Bassey and David Arnold

Ok, so maybe this wasn’t officially offered as a Bond theme, but what if this was used for ‘Quantum of Solace‘? Shirley Bassey is a veteran at doing these theme songs, and David Arnold isn’t exactly a stranger to the odd Bond score. Could this have been a great theme song?

3. If There Was A Man by The Pretenders

Such a fantastic track (taken from ‘The Living Daylights‘), but this was used at the end of the movie – featuring sounds which were the complete opposite of A-HA‘s titular theme song. Despite not getting the top-billing of opening credit theme song, The Pretenders had elements of their songs appearing during the action scenes (which was called Where Has Everybody Gone) and romantic scenes featured tones of If There Was A Man – cleverly put together by the fabulous John Barry.

When you’re not married to Herb Alpert, what chances do you have of making your song into a Bond theme. Phyllis Hyman (who died in 1995 from an overdose) and her rendition of the title song unfortunately didn’t make it onto the final cut of the movie ‘Never Say Never Again‘, which was only really a remake of the Sean Connery movie ‘Thunderball‘, so it wasn’t all that bad. The final decision was to go with Lani Hall (Alpert‘s wife) for the title song, but which of the two songs sound better? They’re quite different.

Another cracking tune which was also referenced many times during the ‘Thunderball‘ movie, but it wasn’t seen as the main theme song. Also performed by Dionne Warwick, this version by Shirley Bassey sees her returning to what she does best, but which do people prefer? Warwick or Bassey? It’s a tough call!

One of the BEST Bond themes in recent times, and this was used in the End Credits of ‘Tomorrow Never Dies‘, the title song which went to Sheryl Crow. Why did they decide against going Lang for the title song, and instead opting for Crow‘s dramatic opening song? Yes, I admit Crow can belt out a tune, but Lang definitely had the best song. The video below shows what her  song would have looked like instead of Crow‘s track.

7. You Only Live Twice by Julie Rogers

Before the Nancy Sinatra opening title theme to ‘You Only Live Twice‘ came this demo version by Julie Rogers. Still keeping with the movie’s south-east asian feel, this is another song which is much different to the Sinatraversion but a tad more dramatic. Maybe too dramatic?

8. I’ll Take It All by Joss Stone & Dave Stewart

Ok, so it’s not a Bond theme in the movie sense, but I think it should definitely be up there with the rest of them. Joss Stone has the belter of a voice normally associated with a Bond theme, and the song could easily have been used on a movie, prior to being used on the ‘Bloodstone‘ video game opening titles.

Ed is an entertainment news writer, and founder of TOMORROW'S NEWS. He always keeps a watchful eye on who and what's trending in the entertainment world. His articles focus on tomorrow's news today, including celebrity news, film news, music news and so much more!
NEWER POSTLEE DANIELS To Direct AMY ADAMS In JANIS JOPLIN Biopic?
OLDER POSTDisney’s THE LONE RANGER – Trailer!