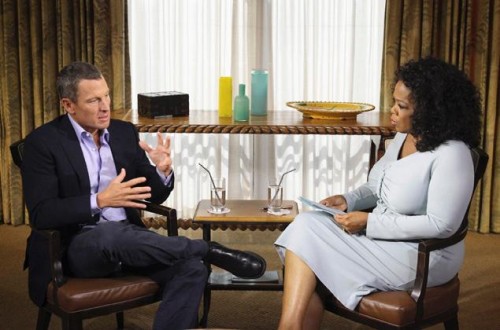 It’s one of the most publicised interviews so far this year, and many are wondering whether former champion cyclist Lance Armstrong will start to redeem himself by admitting to taking performance-enhancing drugs. For interviewer Oprah Winfrey, she says it’s her biggest yet!

The interview, to be broadcast in two segments on Winfrey‘s own cable network at 9:00 p.m. on Thursday (17th January, 2013) and Friday (18th January, 2013), will not have access to the same number of viewers that her ABC specials did. That said, she may have been referring to the exposure of Armstrong as a juiced-up cheat and the mechanisms that allowed him to evade detection.

Speaking on ‘CBS This Morning‘ (15th January, 2013), Winfrey said that for Armstrong, “Emotional” doesn’t begin to describe the intensity or difficulty in talking about these things.

“He certainly had prepared himself for this moment. I would say he met the moment.”

Winfrey added that she, too, had prepared, ticking off the titles of some of her research material and saying that she went into the interview with 112 questions and was able to ask most of them.

She believes Armstrong was pretty forthcoming in his replies, and some were even unexpected, as she adds:

“He did not come clean in the manner that I expected.

“I can only say I was satisfied by the answers.”

You can watch the segment on CBS where she was asked about the interview, and also a brief snippet of the actual interview in the second video.

Ed is an entertainment news writer, and founder of TOMORROW'S NEWS. He always keeps a watchful eye on who and what's trending in the entertainment world. His articles focus on tomorrow's news today, including celebrity news, film news, music news and so much more!
NEWER POSTTHE NME AWARDS 2013 – The Nominees!
OLDER POSTThe 70th ANNUAL GOLDEN GLOBE AWARDS – The Winners!