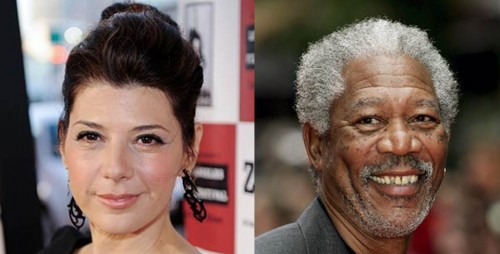 Morgan Freeman and Marisa Tomei are heading for the Broadway stage for one night only, as part of a fundraising play about California’s overturned same-sex marriage law – according to Variety!

Joining the Oscar winners are Cheyenne Jackson, Anthony Edwards and Yeardley Smith, in a read through of ‘8‘ – a play written by ‘Milk‘ scribe Dustin Lance Black.

The production centres on the legal efforts by officials at the American Foundation for Equal Rights to overturn the controversial Proposition 8 bill, which outlawed gay unions in the state, just months after its legalisation in 2008.

Joe Mantello will direct the play and is due to take place at the Eugene O’Neill Theatre on 19 September, 2011 – for one night only!

Ed is an entertainment news writer, and founder of TOMORROW'S NEWS. He always keeps a watchful eye on who and what's trending in the entertainment world. His articles focus on tomorrow's news today, including celebrity news, film news, music news and so much more!
NEWER POSTMACY GRAY Offers Fans The Chance To Feature On New Album!
OLDER POSTMATTHEW MCCONAUGHEY Set To Star As A Retired Stripper!