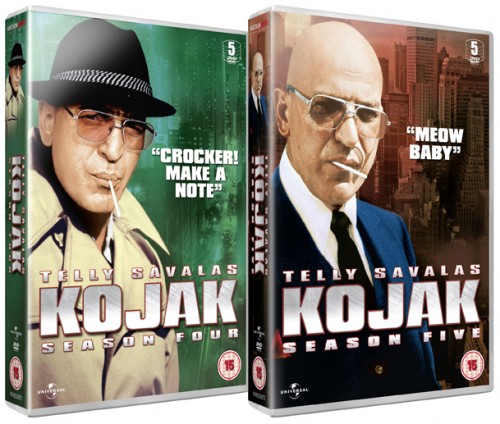 Mediumrare Entertainment brings Emmy and Golden Globe winner Telly Savalas back to the forefront as the famous Detective THEO KOJAK – with seasons 4 and 5 available on DVD for the first time ever! “Who Loves Ya, Baby?”

After Universal released the first season on DVD in 2005, little was known whether they would release the rest of the much-loved series, until Mediumrare Entertainment stepped in in 2010 to release seasons 2 and 3! Now you can watch the lollypop-sucking detective once again in full digital glory!

Each box set features all the episodes spanning over 5 discs, showing Kojak at the height of his popularity with Savalas’ proving his worth and ultimately acts as a lesson to the young stars of today – a lesson in how to ooze charisma while solve some of New York’s most complex crimes! Other stars include Dan Frazer, Kevin Dobson, George Savalas, Vince Conti, Stephen McHattie, Armand Assante, Andrea Marcovicci and more! Season 4 kicks off with some danger closer to Kojak‘s home, as he sees his niece kidnapped on her birthday and she is held to ransom in exchange for a cop killer’s release from prison. Will the famous detective cave in to the criminals’ demands?

The series was created by Oscar-winning scribe Abby Mann, and Kojak appeared on American TV screens at a time when police drama serials were moving from being quite polite and nice to being raw and gritty – some would even say a lot more realistic! It’s safe to label Kojak as the ‘Law & Order‘ of its time, but even faithful fans may now see the show being a tad dated.

Whatever anyone thinks, no-one can argue that Savalas was well and truly the heart of the show, with the magnetism and charm that only he could show. It’s true to say that shows these days don’t have as many morals thrusted in viewer’s faces, at least not as much as the old-fashioned values from the world of Kojak at the time. But even though it does have some flaws, there’s plenty to enjoy in the two DVD sets! If anything, TV enthusiasts will be able to enjoy some American TV history as most of the shows around today were based on the model of Kojak. So much so that the USA Network Cable channel tried to revive the character back in 2005 – with Ving Rhames in the role made iconic by Savalas. However this attempt was in vain as the series only lasted one season!

There’s truth and wisdom in the phrase “they don’t make them how they used to”, because Kojak truly gave viewers a taste of what the Big Apple was like in the seventies, and no-one (even with all the best intentions) can successfully mimic what Savalas brought to the small screen. Yes, not even Ving Rhames!

A must-have for any lover of Savalas, Kojak or quite simply for those who just can’t get enough of classic TV drama!

Ed is an entertainment news writer, and founder of TOMORROW'S NEWS. He always keeps a watchful eye on who and what's trending in the entertainment world. His articles focus on tomorrow's news today, including celebrity news, film news, music news and so much more!
NEWER POSTREYNOLDS & HUNTINGTON-WHITELEY Team Up For New M&S Clothing Range!
OLDER POSTACKROYD Confirms Work On ‘GHOSTBUSTERS 3’ To Begin In 2012!