HPFA To Censor GERVAIS Before The GOLDEN GLOBES?

Ricky Gervais has been instructed that he must submit a script before hosting the Golden Globes this Sunday (15th January, 2012), although the HFPA admits he will be difficult to control!

The British comedian sparked controversy with his put-downs and jokes at the expense of some of the Hollywood’s biggest names, including Angelina Jolie and Johnny Depp at last year’s glitzy ceremony and show bosses are being extra cautious as he hosts for a third time.

Gervais will rehearse his jokes on Saturday (14th January, 2012) in front of members of the Hollywood Foreign Press Association, producers and NBC executives who can all request changes although they understand he will be difficult to manage.

“You can’t muzzle him and I don’t think anybody has any desire to muzzle him.”

As a result of his unpredictability, NBC will present the live event with a five-second tape delay to bleep out any expletives.

Gervais has said he doesn’t understand why his jokes caused so much outrage last year – but has vowed to be deliberately offensive on Sunday, which could take the shine off his gags.

Describing his third stint as the “definitely final time” he will host the awards, he wrote on his blog:

“Now here’s the thing. The outrage I caused was of course, as usual, totally out of proportion to the things I said.

“I don’t think anyone had any right to be offended but they were. This year I’m going to make sure their offence is completely justified. The best thing about it is writing the gags. I love writing one liners. Particularly when they can’t be used in any other context. It gives them a special weight on the night if you know what I mean.” 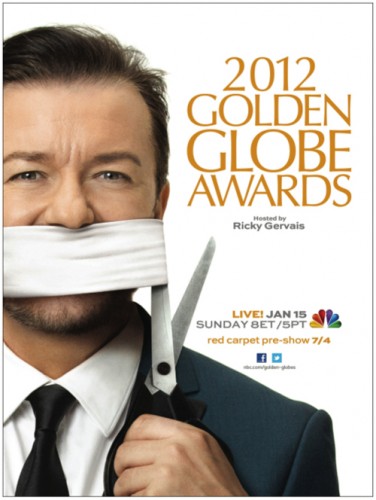 Ed is an entertainment news writer, and founder of TOMORROW'S NEWS. He always keeps a watchful eye on who and what's trending in the entertainment world. His articles focus on tomorrow's news today, including celebrity news, film news, music news and so much more!
NEWER POSTAVATAR Sequel Delayed Until 2016?
OLDER POSTThe Complete JAMES BOND BLU-RAY Box Set Due For Release!