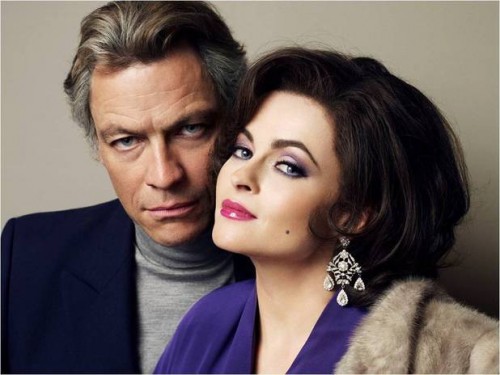 Not often will I watch a drama on BBC 4 that makes me want to continue watching after the first 15 minutes, however as one of my favourite actresses, I was incredibly excited when I heard that Helena Bonham Carter was going to be playing the role of one of the most famous and glamorous actresses to have graced the film industry, Elizabeth Taylor.

‘Burton and Taylor‘ is a TV Biopic set in 1983, starring Helena Bonham Carter and Dominic West, which tells the succulent story of 20th Century movie-royalty, Elizabeth Taylor and Richard Burton. The film highlights the turbulent and very public, relationship between the two during their performance in the Broadway show ‘Private Lives’.

Although the beginning of the film had a very slow start and made me wonder how much longer I could sit and watch before wanting to turn to something with more going for it, the drama soon erupted between the characters and the thought of turning over soon vanished. Carter portrayed the character of a diva, who confided in alcohol and painkillers exceedingly well even down to the personal characteristics of Ms. Taylor. Likewise, Dominic West played a secretive and closed-off character, who managed to hide his feelings towards Elizabeth with ease, very well. The on-screen chemistry between Carter and West perfectly portrayed that of two people who are struggling to cope with their emotions in this period within their personal and professional lives – this would be expected considering they had been married twice before.

Although there was plenty of glamour throughout ‘Burton and Taylor‘, unlike other re-iterations of Elizabeth Taylor biopics, this was not the main focus or purpose of the film. Instead, ‘Burton and Taylor”s main focus was on the strengths and strains of the characters relationship while they maintained their professional lives on stage in front of an audience, which evidently had an effect on their personal lives.

Two small issue’s that I would point out to the director – take note Richard Laxton! New York in the year 1983 would most definitely not have had an electronic Samsung billboard in the city – it was as blatant as a sore thumb. Secondly, did the producers have a sponsorship deal with Coca-Cola? I lost count of the amount of times that I saw the Coca-Cola label. I know I should have been focusing on the storyline but they aren’t exactly subtle colours. These two issues may have been able to slide, however considering it was one of BBC 4’s last in-house drama due to cuts by the corporation, it would have been better to take these things into consideration-well, I suppose it is the BBC after all.

Still, considering the film was shot in just 18 days, these were not at all relevant to the main story nor the characters so I am willing to let it slide because apart from this I really enjoyed the film.