The X FACTOR Blog – Week One!

And so it is back, ITV1’s biggest talent show and occupier of our Saturday nights for the next two and a half months (along with Strictly of course). The revamp feels a bit pointless, and I can’t help but think they would have been better off stripping it back and making it how it was when it first started and wasn’t the tacky extravaganza it has become. But it’s what people want, so who am I to complain?

What’s new? A groovy new catwalk stage, backstage access provided by Caroline Flack, and of course the big twist, whereby the votes are frozen at the end of Saturday’s show and the act with the lowest number of votes is pushed through to the sing-off on Sunday. Apart from that, it was pretty much business as usual, especially the clichés – ‘you nailed it’, ‘you’re the full package’ etc. It’s all so familiar now, it’s gone beyond criticism and the familiarity is quite comforting. The judges were introduced with the usual fanfare, and as it’s so early on in the competition, they’re still quite friendly with each other; but it’s quite disappointing that Nicole and Sharon seem to get on – it’s always fun when the two female judges hate each other. But there’s still time.

The show opened with 17-year-old Croydon girl Hannah Barrett. Hannah’s a nice girl with a good back-story and a fabulous voice, and this will be enough to see her through to next week. But they gave her a limp Tina Turner song to sing, and a makeover that looked as though they were celebrating the fact she comes from Croydon and had decked her out with the contents of George Street Primark. Hannah was followed by Nicholas MacDonald, a cute little Scottish boy who is instantly forgettable and his performance was not aided by him being given True by Spandau Ballet to sing. A beautiful ballad that was transformed into a poppy affair that sounded like a Rick Astley B-Side.

Miss Dynamix were also victims of what I shall from now on be calling the ‘Croydon makeover’. They are three pretty girls, but were given horrendous brightly coloured clothes and horrible hair, and Girls Aloud’s version of Jump to sing. The judges criticised them for not being active enough. One of them is five months pregnant for goodness sakes – cut her some slack! Next up came Sam Bailey, a truly magnificent singer who has been wasted as a prison officer. Lovely makeover, but I felt they played safe by giving her The Power of Love to sing. This was a celebration of the tacky eighties. Why not try something like Holding out for a Hero? I’m with Robbie Williams in that I’m not quite sure where Sam fits in today’s music scene, but I definitely think she should be sending the Ministry of Justice that resignation letter.

Little Sam Callaghan seemed better in the audition rounds than he did live, but maybe I was just blinded by his cuteness. I feel some of that had been taken away by them cutting his hair; and I hated the Bryan Adams song. It’s been done to death and I’d have preferred him to sing something like Footloose or Dancing in the Dark by Springsteen. And please, spare us those Glee dancers. Following the annoying dancers were Kingsland Road and their annoying, flickering backdrop. Good choice in song in Wham’s I’m Your Man; but what’s with the styling? They look like rejects from Carter the Unstoppable Sex Machine (ask your trendy uncle). 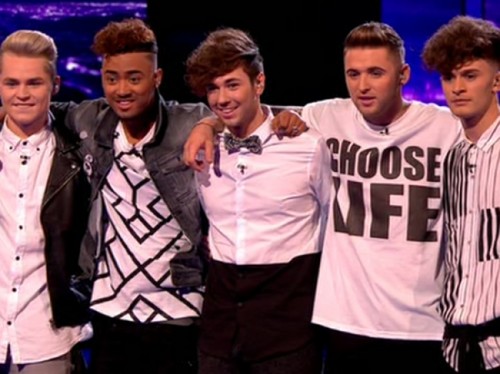 I will never understand why the divine Mrs O chose Shelley the van driver over Joseph the hunky dad, when picking her final three. Shelley is a pleasant, jolly woman who sounds a little like Vicky Pollard, but she is not a pop star. She’s a very good karaoke singer with an act that is just an amalgam of various power singers from the 80s and 90s. I’ve said this all along and the fact that she is in the sing-off tomorrow is proof I’m not wrong!

I fear for Abi Alton too. She’s a sweet little lamb of a girl who rather pales into insignificance compared to the other girls in her group. Her stripped down version of Livin’ on a Prayer (expect her singing the song to the John Lewis Xmas ad next year) was pleasant enough, but I’m a little worried that she’s this year’s Lucy Spraggan. The girl who’s just a little too kooky for this television behemoth, and people will soon view her as a one-trick pony. The twitter reaction was not kind to her as it was. Another victim of negative publicity is likely to be Lorna Simpson. She sang an okay-ish version of Whitney’s So Emotional, and lots of references were made to her being the underdog; but an elephant was in the room in that we all saw the pictures from the film she made and in a society where women are judged on their pasts, I fear her vocal ability will not be able to compete with people’s prejudices.

The last of Nicole’s girls to sing was Tamera Foster, who is currently favourite to win. She is also a girl with a past, but somehow her attitude and swagger negates it. If she ever made it as a pop star (and that’s quite likely, she’s the first ready-made artist the X-Factor has seen since Cher Lloyd), Tamera would be competing with the likes of Rihanna and Miley Cyrus and being bad hasn’t done them any harm.

The last two acts were Luke Friend and Rough Copy. Luke is more famous for his hair than his singing ability. The last X-Factor act to have this affect was a certain Harry Styles, but I fear the attention bestowed upon Luke’s locks are more for the fact that they are unwashed rather than thick and lustrous. What did he sing? Er…. oh yeah, that horrible Police song about stalking. Rough Copy to me were mediocre. Their version of In the Air Tonight was inaudible in places and never really got started. But the judges loved them. Maybe it’s because they would appeal to America, I don’t know. They left me cold.

And that was it. All those weeks of anticipation have built up to this moment. It was rough in places; Louis Walsh’s clichés are exasperating, Gary is far too earnest and I’ve a feeling Sharon doesn’t take it at all seriously. But Nicole is glorious and I won’t have a word said against her!

So, what are my predictions for tomorrow night? Well, I would either lay money on Lorna or Abi joining Shelley in the bottom two. Sticking my neck out I say it will be Abi.

Karen Mason is a London-based writer. She has published fifteen historical fiction novels and is currently working on her sixteenth. She is also an avid movie goer, with a particular preference for gritty British cinema and a weakness for Jason Statham films! Her music tastes stretch from Muse to the Cinematic Orchestra and she loves discovering new acts.
NEWER POST‘CAPTAIN PHILLIPS’ – Ahoy! This Movie Is Making Headway To The Oscars!
OLDER POSTFILTH! – It Will Make You Feel Dirty!!