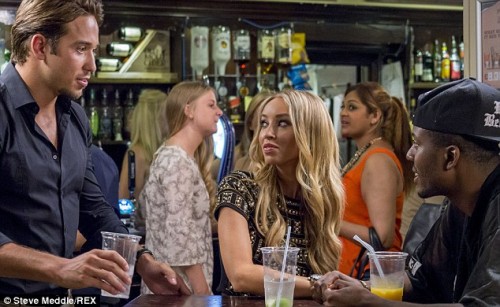 It’s the penultimate week of ‘TOWIE‘, and I have to say this is a series where not much has really happened. It seems to be lacking really strong characters, and what happened to Imogen and Robyn? There was loads of publicity about them when the Marbs episodes were on and now they’ve disappeared.

Arg and Lydia spent the night together. Lydia is regretting it and Arg is like a dog with two tails, telling the world about what they did. Honestly, he behaves like a sixteen year old boy who’s never had sex and has discovered it for the first time. If it was me, I’d be amazed at how Lydia manages to wake up with a face full of make-up and perfect hair.

Most hilarious storyline of the week was the bust up between ‘fashionistas’ Danielle and Vas – let’s not mention Tulisa – Morgan. Seeing these two arguing about fashion was as ridiculous as seeing David Cameron and Nick Clegg arguing about integrity (ooh bit of politics there). In the end they kissed and made up when Vas cried and said that Danielle’s hurtful words took him back to being picked on at school. Now, I don’t wish to sound harsh, but are we really to believe that a man who works in fashion and writes a blog, slagging off celebrities is that sensitive, that when someone who he looks down upon calls him weird, it reduces him to tears. Jog on.

Grace Andrews is nearly as bad an actor as Tom Pearce. Notice how most of her scenes with Fran and Georgia require her to wear sunglasses so big they cover half her face. I presume because her expression can’t match the words she’s shouting.
Gemma reckons she wants Danny Dyer. I was going to say “but he’s a married man” then again….

Lauren Pope’s face does not move from the upper jaw up to her forehead. When she’s with Lewis Bloor, she looks like someone who was a gymslip mum, out with her son. Their whole relationship makes me feel uncomfortable and I think it’s time Lauren revealed her true age. She has been 32 since ‘TOWIE‘ started in 2010.

I really can’t stand Elliott Wright. He’s misogynistic, domineering and pokes his nose in where it’s not wanted. And his dancing with Chloe, at his sister Leah’s wedding was almost as cringe as his and Chloe’s beach snog in Marbs.

Hats off to ITV for editing any signs of Mark Wright or Michelle Keegan from the wedding footage. Then again, everyone was so orange, it’s hard to tell where one person ended and another began. 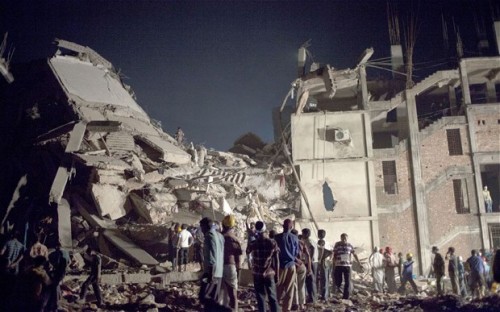 In April 2013, the Rana Plaza complex in Bangladesh collapsed, killing over a thousand people. They were busy working, making the clothes that are currently on our backs. Once the show was over, I felt like rushing to my wardrobe to check where everything had been made. Stupid, I know, because I can’t do anything about it now.

The opening of this documentary was very clever as it contrasted vacuous Western girls on youtube, showing off their high street purchases, with their Bangladeshi counterparts who were recounting how happy they had been to get a job earning what would be to us, a few pounds a week, because it gave them independence. Little did they realise that corrupt business practices and the reluctance of Western clothing manufacturers to pay more money to the factory owners, would lead to one of the worst factory disasters of modern times.

The horror stories never seemed to end. People having to amputate their own arms, others trapped in darkness, surrounded by the mutilated bodies of their colleagues. One girl told how in the stifling heat, people were so thirsty they were forced to drink their own urine or even worse, bite holes in themselves to drink the blood. It sounds like stuff of nightmares, or a storyline from ‘The Mill‘ – C4‘s drama set in the early 19th century, not the twenty-first century. It was appalling to learn that when the cracks in the building were first reported, people were still required to work. The building and planning laws so open to corruption, that when the building’s owner wanted to add three extra floors and put generators on them, he was allowed to. Naturally, when the generators kicked into action, on top of the damaged building, disaster was inevitable.

It makes you feel really uncomfortable living in a society where many of the products we take for granted are made by people who have to work in conditions like this. It also puzzles me why we can’t manufacture more things here in the UK. I know foreign labour is cheap, but we also have whole towns where the local industry has been eradicated and there are high levels of unemployment. Anyway, off my soapbox. This was a horrible documentary, but one we needed to see if only to get us thinking about the things we often use and throw away without thinking.

In the week it was revealed that Peaches Geldof died from a heroin overdose, it seemed rather ironic that this documentary was on, which revealed how the man who would have been her step-father died after years of abusing his body with drugs – both prescription and illegal. In this programme, a pathologist goes over the autopsy report of a famous dead person and reveals how they really died. With Hutchence there has always been speculation whether his death in November 1997 was suicide or the result of a sex game gone wrong. By the end of the programme, there was no doubt as to what it was. He clearly committed suicide.

At the time of his death, Hutchence had a deadly mixture of Prozac, cocaine, antibiotics and alcohol in his blood. He also had two very deep burns on his fingers that hardly seemed to bother him, which the pathologist says is indicative that someone has taken heroin as it numbs the pain. To put it plainly, Michael Hutchence was a wreck. He was a man who had it all – talent, good looks, charisma, and a great career and yet, tellingly, one of his friends revealed he was a very shy man in reality; which points to him being one of those stars who while they had the talent, were poorly equipped emotionally to cope with the pressures of fame and all it brings. A spiral into depression and despair, accompanied by a troubled relationship with Paula Yates, was enough to tip him over. Understandably, Yates wanted to convince herself that he died as a result of auto-asphyxiation, but it was pretty obvious it was suicide.

These programmes are rather salacious but fascinating at the same time. They could have got a better looking actor to play the gorgeous Hutchence, and the pathologist guy has got scary eyes, but it was interesting to discover that the whole myth around Hutchence’s death being a sex game gone wrong was at first a construct by the media and perpetuated by Yates, and barely any evidence pointed to it in the first place.

I just hope Peaches’ death is the end of the curse that seems to blight this family.

Karen Mason is a London-based writer. She has published fifteen historical fiction novels and is currently working on her sixteenth. She is also an avid movie goer, with a particular preference for gritty British cinema and a weakness for Jason Statham films! Her music tastes stretch from Muse to the Cinematic Orchestra and she loves discovering new acts.
NEWER POSTTHAT WAS THE BOX – July 2014 (Week Five)
OLDER POSTTHAT WAS THE BOX – July 2014 (Week Three)