So our favourite perma-tanned friends are back for their twelfth series. As is now custom, the summer series is kicked off with a trip to Marbella, where all the same things that go on in Chigwell, go on in Marbs, but with added sunshine. There are a couple of returning faces in Lydia Bright and Harry Derbridge (remember him?). We also have newbies, Imogen and Robyn and a blogger called Vas (I won’t mention Tulisa when talking about him). Imogen is so pale compared to the other people in the show, she looks as though she’s been catapulted in from ‘Twilight‘. Both her and Robyn look more ‘Made in Chelsea‘ than ‘TOWIE‘ and I have a feeling they may not take off. The most popular ‘TOWIE‘ characters are the over-the-top ones we have come to associate with Essex.

Nothing changes. Even loved up Bobby and Harry split up because apparently Harry was in Tenerife seeing his ex, who interestingly was always called “the ex”. Honestly, I know people want privacy, but normal people don’t talk like that; they refer to names. Couldn’t they just bleep the ex’s name out?

I think there will be a contrived romance between Arg and Lydia. Even though she has publicly gone on record saying she has no interest in Arg, they had dinner together and Lydia started crying and telling Arg how much he hurt her. At least when Lydia cries, actual tears appear in her eyes which is more than can be said for Bobby, Harry or Ferne. Gemma has taken to annoyingly calling herself ‘GC’ and Chloe and Lauren Pope are still not talking. Chloe is loved up with Elliott Wright and in what must have been the most cringe-worthy scene in the history of ‘TOWIE‘, the pair of them recreated the Burt Lancaster/Deborah Kerr scene from ‘Here to Eternity‘. I literary cringed for them. I have to say that Chloe comes across as though she is a nasty piece of work in real-life. It could be acting I suppose. But I certainly wouldn’t want to cross her. I don’t know how she can be so self-righteous about Ferne mucking about with another guy in Las Vegas (frolicking I would call it), when precious brother Charlie (yes I still fancy him – bite me) actually did the dirty with other girls behind Ferne’s back last year.

Funniest scene of the two shows was the highly-contrived argument between Jasmine and Dan, where she kicked off about him sleeping with her and dumping her. We’re supposed to believe it was filmed in one take and was a genuine argument, but they failed to disguise the changing glasses on the table, giving away that it was filmed several times. So far this has felt like the fakest series of ‘TOWIE‘, and I look forward to seeing how much more ridiculous it gets.

In a world away from ‘TOWIE‘, this was one of the most disturbing things I have seen in a long time. It told the true story of a young girl called Ashley who meets a charming older man called Reece who turns into a monster, beating her, humiliating her and cheating on her. The title of the programme gives it away and indeed it ended with him brutally killing her in front of their toddler daughter.

Apparently this programme is going to be shown in schools to teenage girls (and boys I hope) as a way for them to gain awareness into domestic violence. This is a good idea, as statistically, girls between the age of 16-24 are most at risk of being abused by their partners. It struck a chord as many of us have been in relationships with people who try to control us, but some people don’t manage to escape.

The girl who played the part of Ashley – Georgina Campbell, looked spookily like Rosario Dawson, but once I got over that, I was absorbed into this powerfully acted drama. My only criticism is that as usual, the emphasis was put upon the woman. Not what makes young men become abusive. It’s all very well encouraging girls to leave abusive men, but what about the next young woman he moves onto? Surely we need to address the causes of their violence and act to stop this spiral of abuse altogether? 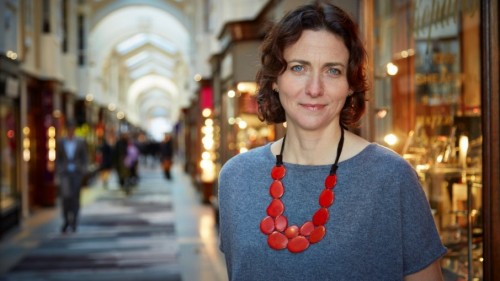 In this Twenty-First Century world, where the majority of shop workers are female, it’s hard to believe that once upon a time, females were virtually banned from working in shops. This fascinating documentary series started with a weird story of how in 1861 in Glasgow, a young girl posed as a boy just so she could work in a shop, and even when she got found out and fired, she did it again in another shop (seriously has no one written a novel about this?). In Victorian society it was deemed unladylike for a girl to work in a shop as it was felt her delicate constitution couldn’t take standing for ten hours a day (it’s not as if the female body was designed for pregnancy and childbirth or anything), and so it was jobs for the boys. Another fascinating nugget of information I garnered was that long before the Suffragettes, there were the Ladies of Langham Place, a group of women who gathered together and discussed the plight of women and looked for ways to find employment for single, working and lower-middle class girls.

This hour-long programme provided me with enough material for novels for the next three years! Like how the girls who finally got to work in shops, earned so little money, they took to becoming prostitutes to make ends meet; and the story of William Whiteley, who started off as a draper’s assistant and ended up opening a huge department store, where he enjoyed the – ahem – company of many a shopgirl. Sounds more interesting than ‘Mr Selfridge‘!

My only criticism is that while Dr Pamela Cox is a very competent presenter, I would have preferred it to be Lucy Worsley. I can just imagine the CGI’d sequences where she would pretend to be both shopgirl and eccentric upper-class shopper. It would have made the programme more fun, but on saying that, I’ll certainly be tuning in next week. Who knows, by the end of the series I reckon I’ll have enough material for novels to keep me going until 2020! 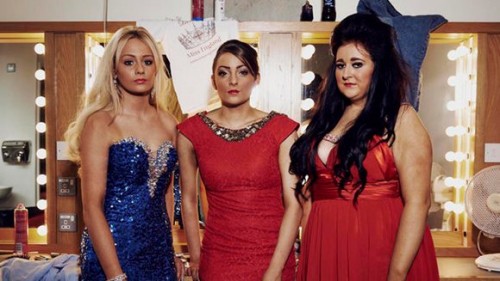 Or what about a book about a poor girl from a council estate in Dudley who dreams of becoming a beauty queen? This isn’t fiction, it was the subject of episode 1 of this new series from Channel 4 looking at young girls from society’s most deprived areas, who are looking to the world of beauty pageants as a way out of their dreary lives. We met Diamond, a Rihanna look-a-like who seemed very young for her eighteen years. After a childhood littered with spells in care, due to her mother’s imprisonment for drugs offences, Diamond is both angry at and terrified of the world. In her group of mates she’s lairy, loud and starting fights with other girls. Get her in front of a panel of other beauty contestants, wearing their crowns and she turns into a shy teenager.

Then there was Natalie, a bubbly mobile hairdresser with rather loud, red hair, who was the least extraordinary of the girls. I got the feeling that the beauty pageant was just an experience for her and wasn’t something she wanted to make as a career choice, and by the end of the show, she had passed her test and was able to become a fully mobile hairdresser.

There was Sammy-Jo, who was eighteen and like Diamond, had been in and out of care and was now living in a hostel. She attended her interview looking like she had been dragged through a hedge backwards, and yet somehow made it through to the next round. However, due to living on £56 a week dole, she couldn’t afford the £50 entry fee and so dropped out. I think her and her uber-chav boyfriend should be given their own series. They were almost as funny as Dean and his mother from ‘Benefits Britain‘ last week!

Finally there was Ruby, the spoilt, lower middle-class Michelle Keegan look-alike, who had already entered several beauty pageants and had a wardrobe of fancy frocks, when the likes of poor Diamond had to borrow her mate’s prom dress for the final. Ruby looked as though she had retractable claws hidden under her fingernails, and I got the feeling she would’’t be a stranger to a backstage cat-fight. Still, out of all our girls, she was the only one who finished with a place in the competition.

I have noticed that this column this week is quite female-centric and I apologise to any male readers, but there’s no getting away from it – We Run the World.

Karen Mason is a London-based writer. She has published fifteen historical fiction novels and is currently working on her sixteenth. She is also an avid movie goer, with a particular preference for gritty British cinema and a weakness for Jason Statham films! Her music tastes stretch from Muse to the Cinematic Orchestra and she loves discovering new acts.
NEWER POSTFIRST TRAILER For RIDLEY SCOTT’S EXODUS: GODS AND KINGS!
OLDER POSTTHAT WAS THE BOX – June 2014 (Week Three)