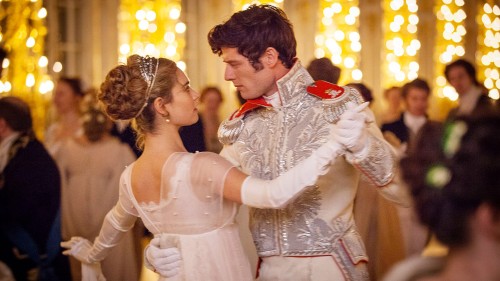 We are now half way through this largely disappointing but at the same time, entertaining series, and it starts with poor old lumbering Pierre challenging dashing Dolokhov to a duel, due to do the latter bonking the former’s wife – Helene (who quite frankly would come onto a table leg if it was dressed in officer’s uniform). Even though Pierre has no idea how to hold or fire a gun, he manages to shoot Dolokhov, thus, I suppose, making him the winner. But rather than feel better about himself, he goes into deep introspection and ends up meeting Ken Stott who is playing a Scottish Russian with a hint of Italian, who persuades him to join the Freemasons. Dolokohv on the hand has ingratiated himself with the Rostov family and is making eyes at Sonia, who is in love with the rather feckless Nikolai, and even when he proposes, she turns him down, so when Nikki dumps her, it serves rather a bitter blow.

It went all a bit ‘Sound of Music‘ this week, with lots of singing from the Rostov family. I think it was to highlight how pure and lovely Natasha is, but at times I did wonder if it was going to turn into a musical.

Because of her lovely singing, the stoic Andrei has realized he is in love with Natasha and the episode ended with him being advised by Pierre to propose to her. Although Pierre is quite frankly the last person I would turn to for romantic advice. Despite finding himself via the Masons (I’ve been one all my life) and finding new interest in his estate and the poor serfs working for him, he still insisted in giving his marriage to Helene another go – despite the fact she has now moved onto Boris Dubretskoy and has her eye on the Tsar. She’s a girl, that one. I was rather hoping, when Pierre visited the Bolonsky family and was sitting next to Marya, he would find her attractive and pursue her. She’s a far better match to him than Helene.

As I said, there is something rather disappointing to this drama. I think it’s because it feels quite superficial, but in a soapy sort of way, it’s watchable and because I haven’t read the book, at least I don’t know what’s going to happen. 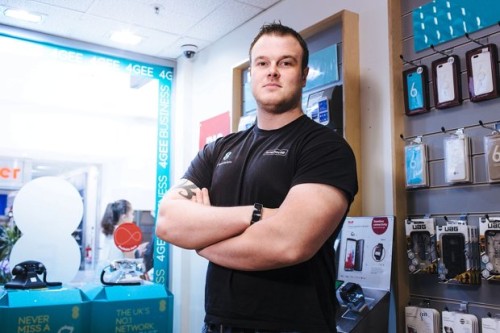 I can see this little-publicised gem becoming something of a cult watch, especially seeing as nearly all of us own a mobile phone and at some point have had to deal with mobile sales people. For anyone who watched the wonderful sitcom ‘Phoneshop‘ on E4, they will see that fiction and reality isn’t too far apart.

There are currently twenty-four thousand mobile sales reps in the UK and every year, the outstanding ones compete to become Mobile Rep of the Year or whatever the award is called. Basically, each retailer chooses their most outstanding salesperson and nominates them for the award, and over six months, they face various tests and challenges to discover who is worthy of the crown.

The show has got all the ingredients of a hit. We’ve got hopefuls that look like shoo-ins, like EE’s Jonny Brown who has already won their own award for outstanding performance, and yet only gets scored 87% by the mystery shopper and therefore fails to make it. There are the hopeful self-nominated candidates like the sweet, and rather Chico-like Roland Ratvay, a Hungarian immigrant who started off cleaning toilets in Butlins and is now one of Three’s top salespeople (take that, Nigel Farage!). Roland is bouncy and happy, and not embarrassed that he shares his name with a TV puppet – he even has a mug with RR on! There are also Kiet and Ayyub, who are two young men working in Lewisham’s Three branch, they were plucked from the dole queue by their slightly crazy manager, Jason and like Roland have made it through to the next round of the competition.

Then there was Maria, who worked for Tesco Mobile, and did seem to be slightly channelling Janine from ‘Phoneshop‘, even down to the poker straight hair and monosyllabic voice. Like Jonny, she seemed a certainty, but she fell at the first hurdle with the secret shopper only scoring her 85%. We then have Andy from Sunderland who works for a small, independent chain called Fonehouse. Andy seems a jolly chap, and I suspect his colleague Danny is secretly in love with him because he seems to look for any opportunity to touch him!

Then there were the judges. There is Mick, who is the secret shopping mogul, in charge of sending out all the mystery shoppers who are helping to judge our hopefuls, and Christian who was a salesman himself and came third in the competition, previously. He is obviously Mr Nice, working alongside, Sunetra, who I fear will become the star of the show. She makes Simon Cowell seem like Bruno Tolioni. She finds fault with everything. Has no sense of humour and wants perfection. Let’s face it, everyone loves the nasty judge.

One of the highlights for me was John Sherwood, last year’s winner, who is now a Development Manager for Sony, after being head-hunted. He travels everywhere by his company car, which is his office and lo and behold, he ‘discovers’ he has his award in the boot. David Brent lives and breathes!

I hold great hope for ‘Phone Shop Idol‘. Roland is my personal favourite at the moment, and I can’t wait to see what the following weeks bring. 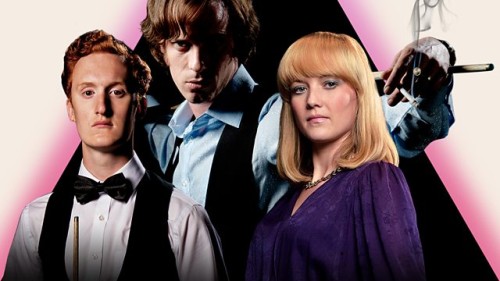 This was one of the first made for iPlayer only dramas that the BBC have made (although I am sure it will grace our TV screens before the year is out) and it told the story of Alex Hurricane Higgins and Steve Davis, and how they both came to shape snooker into the major game it is now.

It was very much a film of two halves. The first part was very much comedy-drama, with Higgins the rock-star like player whose swaggering and boasting made him a hero to the working class men who watched snooker, attracting the attention of TV bosses who helped make him a star. Into his life walks Steve Davis, nerdy, boring and dull, but brilliant at snooker. Higgins suddenly went from the People’s Player to the outlandish outsider, while the mums and nans warmed to Davis with his Estruary vowels and nice-guy persona. The second half was more about Higgins’ fall into the abyss, which in real life, saw him die at just sixty-one. Unable to resist the temptations of drugs, booze and sex, he became a mess and became more famous for being a shambles than his snooker playing.

On paper it sounds good, but there was something lacking from it all, and I’m not sure what it was. While Luke Treadaway gave a fantastic performance as Higgins, he looked more like Mick Jagger. Will Merrick was spot on as Steve Davis, even down to the rather vacant stare, but for some reason Kevin Bishop was channelling Bradley Walsh instead of Barry Hearne, the snooker and boxing promoter.

Higgins’ wife, Lynne just seemed to be there in the background, crying a lot, and for me, it would have been better to have a bit more of an insight into Higgins’ life before he became a champion snooker player, it would have made his downfall seem all the more devastating. As it was, anyone too young to remember the snooker heyday would wonder what drove him to become such a mess.

I’m not sure if the anachronisms were post-modern and deliberate, but there definitely were not any satellite dishes on the walls of hotels in 1981. Lynne would not have told Alex she was frightened of getting AIDS in 1983. In Every Dream Home a Heartache by Roxy Music was from their eponymous album of 1971 and therefore weird being played in a scene set in the eighties.

The whole thing felt as though it was written by someone who had skimmed through Higgins’ and Davis’s autobiographies, at their local library and decided to write a TV show about it. There wasn’t enough depth for it to be a drama and it wasn’t funny enough to be a comedy. It was okay, but I feel if it had been made for TV, with a bigger budget we would have got more for our money.

Karen Mason is a London-based writer. She has published fifteen historical fiction novels and is currently working on her sixteenth. She is also an avid movie goer, with a particular preference for gritty British cinema and a weakness for Jason Statham films! Her music tastes stretch from Muse to the Cinematic Orchestra and she loves discovering new acts.
NEWER POSTTHAT WAS THE BOX – January 2016 (Week Four) | TV Reviews
OLDER POSTTHAT WAS THE BOX – January 2016 (Week Two) | TV Reviews