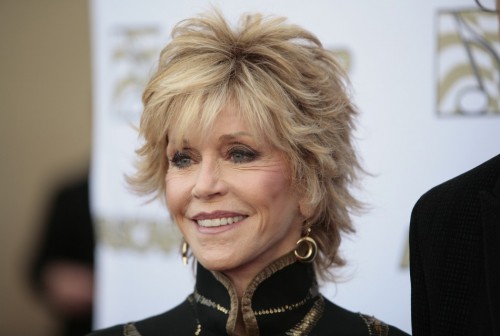 Jane Fonda has opened up about her unhappy time in her teens, including when she suffered with self-esteem issues and eating disorders.

The Oscar-winning actress and fitness video star recalls her difficult upbringing after her mother took her own life before Fonda, now 76, became a teenager. This was made even more difficult with a distant and difficult father – Henry Fonda.

She also claims her stepmother would insinuate she was overweight which led to her developing having self-esteem issues and developing bulimia.

Speaking to People magazine, she said:

“I never felt pretty or confident. My dad wouldn’t tell me [I looked fat] directly; he would have his wife tell me that my bathing suit was too small or my belt was too tight or my skirt was too short. I became bulimic and anorexic, the whole thing.”

Fonda, who has now penned a self-help book for youngsters called Being a Teen, admits she didn’t learn how to love herself or laugh about herself until much later in life.

“God, I was a serious child. It took [ex-husband] Ted Turner to teach me how to have a sense of humour.”

When asked if she could say one thing to her parents, she replied:

“I would say, ‘I need you to love me’. But I’ve talked to a [medium] who has communicated with my mother, and she’s so proud of me. My dad’s always with me, I know they’re both proud.”

Ed is an entertainment news writer, and founder of TOMORROW'S NEWS. He always keeps a watchful eye on who and what's trending in the entertainment world. His articles focus on tomorrow's news today, including celebrity news, film news, music news and so much more!
NEWER POSTSTELLA MCCARTNEY And ANGELINA JOLIE Design MALEFICENT Fashion Range!
OLDER POSTTHAT WAS THE BOX – March 2014 (Week Two)