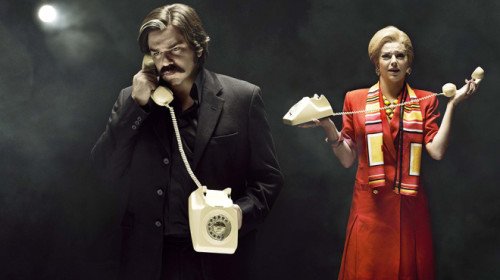 You’re not watching ‘Toast of London‘! Are you mad?

Well actually I don’t know the viewing figures for Arthur Mathews and Matt Berry’s new sitcom, but I won’t rest until it becomes compulsive to tune in. To the un-initiated, ‘Toast of London‘ is a Channel 4 sitcom about Steven Toast, a deluded actor living in London with his flatmate Ed Howzer-Black (played by Robert Bathurst – a mile away from ‘Downton Abbey‘ and Lady Edith). There have been rather a lot of sitcoms over the years about deluded thespians – ‘Gimme Gimme Gimme‘’s Tom Farrell; ‘Vicious’ Freddy‘; ‘Count Arthur Strong‘ – that’s just off the top of my head. What makes a refreshing change about Steven Toast is that he knows, as an actor, he is pretty shit and lucky to be scraping a living doing rubbish voiceovers and a play that is so bad it warrants members of the public who have seen it, to beat him up in the street.

Toast’s delusion comes in his appeal to women. Although in all fairness, women do seem to like him for some inexplicable reason. With his Dickie Davies hair and old-fashioned clothes, he looks as though he has come straight from 1975, as does Ray Purchase (Harry Peacock), his nemesis, another actor whose wife Toast seduced. It is easy to imagine Toast sending out Christmas cards of himself naked, on a fur rug with nothing but a brandy glass to hide his modesty. He reminds me of all those hairy, rather greasy men that women seemed to lust after when I was a little kid. Even the opening titles and music seem to have come from somewhere around 1978.

That’s about as straightforward as we get, for ‘Toast of London‘ is a wonderful exercise in surrealism. Characters have wonderful names like Clem Fandango, Jane Plough (pronounced ‘Pluff’) and Susan Random. Every club or theatre Toast visits appears to be situated in the smallest building in London. In the first episode, Ed’s girlfriend Kikini Bamalam, a beautiful African girl, undergoes plastic surgery which leaves her looking just like Bruce Forsyth, all except for one of her hands (yes, really), but Ed still finds her attractive. In the second episode of the current series, Toast rehearses a play with director Acker Herron, who actually killed one of his actors because he didn’t do what he wanted. Angry with Toast’s resistance, he challenges him to a fencing duel, ensuring Toast wears an electrified suit.

There are great running gags – Toast’s lack of achievements are measured against Michael Fassbender; and whenever anyone mentions the ubiquitous Benedict Cumberbatch, Toast replies “Who?” with genuine puzzlement. We also get a musical number each week where Toast is accompanied by a child version of himself (complete with white hair stripe and moustache).

If you enjoyed the surreal barminess of ‘The Mighty Boosh‘, and the musical fantasy sequences of ‘Flight of the Conchords‘, then you will enjoy ‘Toast of London‘. Let’s face it, Sunday nights are pretty depressing, with work looming, the next day. Why not treat yourself to a bit of silliness to lift your mood before bed?

‘Toast of London‘ is on Channel Four – Sunday 10pm. All episodes are on 4od.

Karen Mason is a London-based writer. She has published fifteen historical fiction novels and is currently working on her sixteenth. She is also an avid movie goer, with a particular preference for gritty British cinema and a weakness for Jason Statham films! Her music tastes stretch from Muse to the Cinematic Orchestra and she loves discovering new acts.
NEWER POSTThe X FACTOR Blog – Week Five!
OLDER POST‘LAST VEGAS’ – A Winning Bet, If You Know What To Expect!