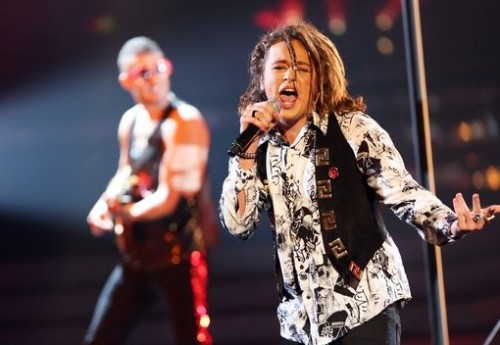 Yay! I finally got it right last week and we said goodbye to Miss Dynamix. I can’t say I missed them this week, and I can’t believe Simon Cowell reckons he would have kept them and got rid of Hannah. I could speculate on why but I won’t go there.


This week the theme was disco (at least it wasn’t lame Halloween like Strictly, even though most people are now thinking about Bonfire Night), and the show opened with a rather overlong performance by Nile Rodgers and Chic. Whilst no doubt a legendary act, I wondered why they couldn’t have performed in tomorrow’s show instead. Saturday is all about the competition, and we just want it to get underway. We were also informed by Dermot that there was no flash vote tonight. No doubt the producers have been listening to the critics who have all been claiming it pointless.

Once it did start, we had Luke Friend singing Play That Funky Music by Wild Cherry. This was probably his best performance to date, but I still looked at him and saw a pretty girl in a patterned blouse. But he gave it a good shot and carried it off, and it was actually the first performance of his that I enjoyed. Lou Walsh reckons he’s a little Johnny Depp (??) but to me he’s this year’s Olly Murs.

Next to sing were Kingsland Road, who were performing Blame it on the Boogie by The Jacksons (and about six thousand other artists). Their hair was still rather distracting, but they’ve at least seen the gel pot and it was a little less ‘Joey Essex’. They always give it 100%, but I agree with Nicole that they are too polished and too perfect, and even Sharon told them that their desire to win the completion shows on their faces, and she’s hit the nail on the head. There is an air of desperation around Kingsland Road, and I find it off-putting.

Tamera Foster gave a below par performance of Wishing on a Star by Rose Royce. She had a ridiculous frizzy hairstyle that reminded me of Naughty Girl era Beyonce. But the performance was her own. I do sometimes feel she relies too much on being pretty and sexy rather than actually developing a personality. I found her rather dull this week. I’m not sure if she’s reached a peak, or she was just having an off day. Next week will reveal all.

Sam Callahan is on my worry list this week. The cutie sang Relight My Fire, which although was originally by Dan Hartman, is synonymous with Take That, and it was brave of Sam to tackle it given that Gary is not his biggest fan. Alas the song showed up how weak his vocals are, and whilst you hardly have to be Pavarotti to get away with Relight My Fire, you still need to actually be louder than the music. The set was this weird boxing ring malarkey and it was a mess. Of course Gary hated it, and a part of me doesn’t blame him.

Rough Copy upped their game this week. Whilst the song September by Earth Wind and Fire is pretty tired and an easy option, they pulled it off with panache. The styling was better tonight, but it’s still a bit ‘Gladiator does Strictly Come Dancing’. Their performance was slick and professional and my spidey senses keep telling me that they could be winners and even the boys to claim JLS’s crown when they call it a day once and for all.

Abi Alton was singing her usual John Lewis ad version of a song. This week it was I Will Survive by Gloria Gaynor. It’s disco week and she should take risks like the others have – see Luke Friend, who’s a rock singer but who ‘disco’ed up’ and took a chance. For some reason the producers are pandering to Abi and it isn’t fair on the other contestants and I thought the point of the X-Factor was to throw them challenges and they have to rise to it – even if it does mean they have to step out of their comfort zones.

Nicholas McDonald tackled Rock With You by Michael Jackson and looked quite uncomfortable doing so. He gave it good effort, but it was like a choirboy trying to sing about seduction. But to give the boy his props, at least he did it in disco-style which is more than a certain other person did.

I wanted Hannah Barratt to sing I Will Survive; but when those opening bars of Somebody Else’s Guy kicked in, all was right with the world. Hannah looked amazing in a glittery diva dress, and her vocals easily matched Jocelyn Brown, with just a hint of Nina Simone when she sings in her lower register. She so suited this sort of music. Someone teleport her back to Studio 54 in 1977 purlease!

Sam Bailey sang Enough is Enough by Donna Summer, and once again, she stepped out of her comfort zone and went uptempo. I found it a bit too cabaret and at times she was doing that legs apart standing like Celine Dion, but her vocals were as amazing as ever, and she looked fantastic in a black jumpsuit, which was very fitting of the era. Sam B is a proper contender.

No flash vote, and so we do not know who will be in the bottom two, but I predict it will be Sam C and Abi Alton.

Karen Mason is a London-based writer. She has published fifteen historical fiction novels and is currently working on her sixteenth. She is also an avid movie goer, with a particular preference for gritty British cinema and a weakness for Jason Statham films! Her music tastes stretch from Muse to the Cinematic Orchestra and she loves discovering new acts.
NEWER POST‘LAST VEGAS’ – A Winning Bet, If You Know What To Expect!
OLDER POSTTHOR: THE DARK WORLD – Review