NOW YOU SEE ME 2: “You Won’t Believe Your Eyes” 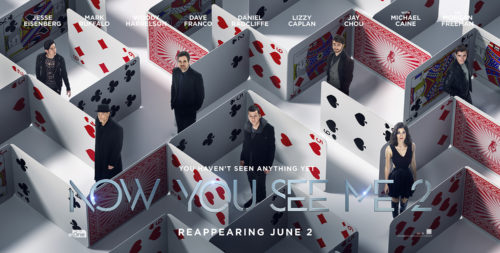 If you were totally intrigued by the magic in ‘Now You See Me‘ three years ago, you will be pleased to hear that the sequel, ‘Now You See Me 2‘, definitely delivered.

It’s straight talking, no-nonsense, eye-popping, mind-boggling magic that will make you gasp and leave you contemplating for days.

We join The Four Horsemen  once again who consist of: the hypnotist Merritt (Woody Harrelson), the street magician Daniel (Jesse Eisenberg), the bamboozling artist Lula (Lizzy Caplan, in the first film this role was played by Isla Fisher), and card throwing Jack (Dave Franco). We also have FBI agent and other Horseman Dylan Rhodes (Mark Ruffalo). 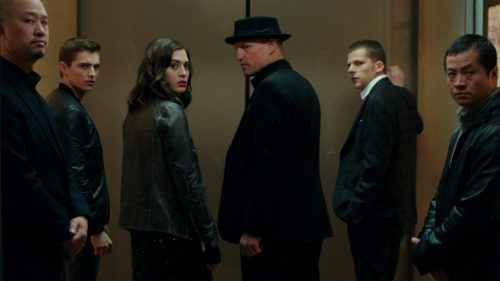 In the first movie the Horsemen robbed the rich and showered their audiences with the money in Robin Hood style.  Now The Eye, a secret magical society, has a new mission for them as a new threat arises.

Technology boss Walter Mabry (Daniel Radcliffe) recruits the Horsemen to steal a powerful chip called “the stick.” It has the power to de-encrypt and control any computer program in the world.

There’s definitely a lot going on in this film to captivate you.

One interesting thing is getting more insight into what happened to Dylan Rhodes (Mark Ruffalo) father. Most of us can agree that the first film left us with some questions. In this film we have a back story that takes us back to 1984 when Dylan watched his father drown in a trunk after trying to perform a Houdini style stunt.  We find out that Dylan blames Thaddeus Bradley (Morgan Freeman) for his father’s death, and more to this story unravels.

‘Now You See Me 2 offers artistic and creative magic to enchant you, wild stunts to thrill you, and an intriguing storyline waiting to blow your mind.

There is real pleasure in this film as you watch the Horsemen perform magic in a ways only comparable to superheroes.

Let the illusions overtake and excite you.

Khardine Gray writes fun, romantic fiction and is currently working on her second novel due to be published by the end of the year. She loves any film done by Marvel and all super hero films. She also loves thrillers, films with fast cars and action films. In her spare time when she isn't writing you can find her taking full advantage of an ice rink, or any ballet class she can find. Or, simply shopping and enjoying a good pizza.
NEWER POSTTEENAGE MUTANT NINJA TURTLES: OUT OF THE SHADOWS – “A Blast From The Past”
OLDER POSTWARCRAFT – THE BEGINNING: “A Delightful Magical Adventure”