FAMILY GUY – Why Is It So Successful? 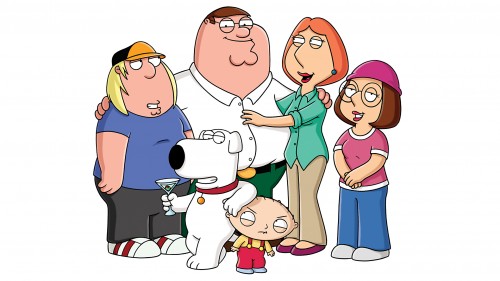 ‘Family Guy‘ is like Marmite, people love it or they hate it (I have yet to meet someone who has been in the middle of the two)!

Created by Seth Macfarlane, ‘Family Guy‘ follows the strengths and struggles of the dysfunctional family, the Griffins that consists of Peter and Lois Griffin, their children Chris, Meg, alcoholic baby Stewie and their intellectual talking dog, Brian. The show is set in fictional suburb Quahog, Rhode island and contains random characters and situations, often repeated throughout the series, which are what make the show so iconic. ‘Family Guy‘ also majorly consists of cutaway gags, which are resemblant of American Culture.

BBC 3 are now showing ‘Family Guy‘’s 11th Season, which is a great milestone for any comedy let alone one that has caused such uproar from viewers in the past.

While watching episode ‘Yug Ylimaf’ (an anagram for the words ‘Family Guy’ because of what the episode is about) on Sunday it got me wondering what it is that enables a comedy to get so far without it becoming repetitive and boring – and it’s not showing any signs of stopping.

Could it be the randomness of what the characters say? Is it the random and sometimes crude characters and their situations? Is it because of it’s ability to mock the real life situations and get away with it? Is it the lack of Political and moral correctness? Or is it because it is so wrong it’s funny? Personally, I think it is all of the above and I love it for it.

There are often times when I watch ‘Family Guy‘ and just grin to myself, because I am not sure if I should laugh or be outraged, but this is what makes it such a great show to watch.

Although ‘Family Guy‘ will often cause offense depending on the issue, I think they do a great job in trying to put comedy into such dire situations. It doesn’t matter what you create there are always going to people who can pinpoint something that is not politically correct. Now, by no means am I encouraging such humour in daily life or saying that what they do is ok, but it is great that comedy like this has had such widespread success. I have come across many people who hate the show with a passion because of it’s immoral and insulting take on certain subjects, insulting Jews for example. However I think it brings humour to people’s lives and situations and allows people to see another side of things – it is ok to laugh, you know!

As long as the writers at ‘Family Guy‘ continue to add new gags and jokes, I think that they have a good couple years left yet. Sorry haters!