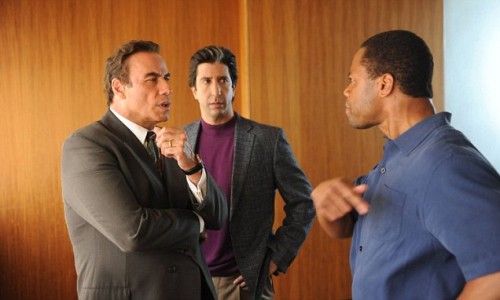 
This dramatization of the OJ Simpson affair began, rather inexplicably with the Rodney King incident and the subsequent LA Riots. I say inexplicably because I’m not sure what it was saying about this programme. Was it a case of Simpson being picked on because he was black? Or was it that he was going to be treated leniently because he was black? I wasn’t sure what it had to do with it, and by the end of the episode, I still wasn’t sure.

Anyway, onto the programme itself. I’m not sure why they cast Cuba Gooding Jr to play Simpson. He looks as much like him as I do, but never mind. It started very much like a run of the mill detective drama, with a dog walker finding the bodies of Nicole Brown Simpson and Ron Goldman, murdered horribly and covered in blood. The detectives immediately became suspicious because, on hearing that his wife had died, Simpson did not ask how it happened. Then into the show comes Sarah Paulson playing prosecutor Marcia Clarke, who does a bit of digging and discovers that Simpson has been previously accused of beating Nicole, so all fingers start to point to him being the main suspect. Clarke doesn’t care whether it’s a big, famous footballer and actor who is in the frame, her main concern is that the system has failed Nicole, leaving her vulnerable to attack by her husband. So as well as racism, we now have sexism thrown into the pot as well.

Then it starts getting even more surreal. David Schwimmer is playing Kim Kardashian’s dad, Robert, who will go on to defend Simpson; and John Travolta in a wig and some sort of face mask playing celebrity lawyer Bob Shapiro. Kris Jenner is played by a woman who looks nothing like her, and great amusement came at the funeral when the little girls (Kim, Khloe and Kourtney) were ushered out of the way. I truly can’t decide if this is a serious drama or a sort of spoof or salacious tabloid telly. But I can’t wait for the dramatization of the Oscar Pistorious trial with Nick Frost playing the leading role. 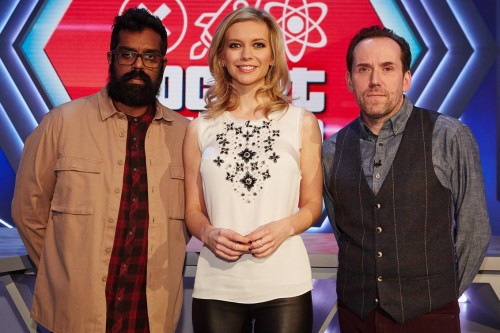 
Seriously, what has gone wrong with ITV’s scheduling? Obvious Sunday night shows ‘Jericho‘ and ‘Mr Selfridge‘ on of a Thursday and Friday, respectively. Friday night entertainment like ‘Benidorm‘ on a Monday evening. Now we have this ‘It’s Not Rocket Science’ obvious Saturday night 6pm view, shown on Tuesday night at 8pm. I don’t know about you, but after a day at work puzzling over figures and other people’s obsession with talking about food, or a day at school doing science, the last thing I want to do is go home settle down with my dinner and watch people doing ‘science’.

Hosted by Ben Miller (why on earth did he sign up for this?), Rachel Riley off Countdown and ‘comedian’ Romesh Ranganathan who is about as funny as being locked in a cell in Guantanamo Bay with Jeremy Clarkson, this promises to be the ‘Top Gear’ of Science i.e. people who are paid too much doing stupid experiments that none of us will ever be able to afford to replicate. The first experiment was to try and prove that a man could outrun a jet plane (yes really), so Ben got a free ride with the Red Arrows while the plane taxied along the runway, racing against Olympian sprinter Adam Gemili. Guess what, the plane won. Next.

Rachel (who suddenly sounds cockney – has she been to the same drama school as Darren Day?) was next up, and with the assistance of the dashing Doctor Fong, who is the resident expert apparently. She got to be propelled through a jet of fire to prove that being soaking wet (she was doused with water beforehand) stops you from burning. Okay. The drama was pretty much taken out of it given that she was there in the studio with all her skin intact, introducing the feature. There are lots of slow-mo added to each of the experiments, I’m not sure if that is to add to the drama or pad the time out.

Apparently Romesh used to be a maths teacher and so he went back to his old school to take a class, and show off a lot of expensive gadgets that are supposed to make teaching more fun for kids. The product placement was amazing, and I suddenly realised who’s funding the show. I quite liked the robot with the iPad attached. It would be nice sending one into work while I stayed at home watching ‘Homes Under the Hammer‘.

We moved into ‘Tomorrow’s World‘ (ask your mum) territory when Romesh got to try out a newly invented gum-shield that was designed to show rugby players when they had been tackled too hard and needed a rest. Using traffic signal lights – green, amber and red, it has been designed to save lives. However surely if it shows red, it’s too late, the tackle has been done anyway.

For me, the best part of the show was when Ben Miller and professional thickie Joey Essex tried to operate a mind controlled car. Joey brought a picture of his cat for something to concentrate on, but it didn’t work and the car only seemed to move when he was making up raps with Ben or checking his hair. For Ben, being with a stupid young man must have taken him right back to those Tesco ads. We only needed Ruth Jones and it would have been like the Christmas advertising schedule all over again.

On the whole the programme wasn’t too bad, but I think the scheduling let it down. Saturday tea time would be better, then Sunday could be spent by all the family copying the experiments they’ve seen, like going down to Heathrow and running alongside a 747 to see if they can beat it. 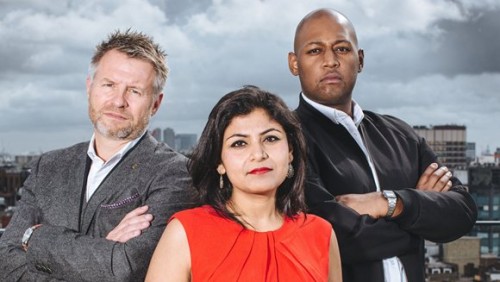 
It is time for the final round to whittle our remaining twelve down to six. Well, I say twelve, it starts with eleven, with a place going to the wildcard who can drum up enough public votes to get them a place in the final. I wanted Lewisham Legend Kiet to be put through, but the high annoying Mark ‘Brand’ Davies from EE Poole beat him by 53 votes and therefore he joined the other eleven contestants. Naturally Kiet’s boss Jason was highly disappointed, especially after his pep talk, urging young Kiet to think of himself as a rock-hopper penguin, hopping up and up even if he got knocked down. Someone please give Three Lewisham their own fly on the wall show. Jason is a star in the making.

The final rounds take place in a luxury hotel in London, and over twelve gruelling hours, the finalists show what they’re made of. Their first challenge is to place five phones in decreasing battery size, a lot of them get it wrong, including cocky Jake from Carphone Warehouse in Birmingham. In true ‘X-Factor‘ style, we got his back-story, where we saw him visiting the graves of his grandparents and his dad. Apparently dad was a bit of a bad boy and Jake was expected to go the same way, but selling phones saved him, pretty much in the same way it did Ayyub from Lewisham. It used to be the only choices for working class boys was boxing or crime, now it seems as though it’s working in a phone shop or crime.

My favourite, Roland got 5 out of 5 in the phone challenge, as did Mr Perfect Nick, who also scored a perfect five in the next round, placing the phones in decreasing order of mega-pixel. I’m not surprised the poor sods stuffed up, with scary Sunetra standing by the table, fixing them with her withering gaze.

The next round gave the contestants the chance to redeem themselves, when they were asked the questions they’d stuffed up in the previous round. Most did appallingly. Holly, who had come from her Tesco Mobile pod in a branch of the shop, was reduced to tears when she didn’t know the answers. Jake scored the best with three out of six, which is still pretty bad. So, with next week’s final episode and the last round, we have no idea who will make it to the final. Although in the opening credits we see Andy from Foneshop Sunderland, in a suit, in a hotel, saying “Christ on a bike” I think we can safely assume he makes it through. Talk about spoilers!

Karen Mason is a London-based writer. She has published fifteen historical fiction novels and is currently working on her sixteenth. She is also an avid movie goer, with a particular preference for gritty British cinema and a weakness for Jason Statham films! Her music tastes stretch from Muse to the Cinematic Orchestra and she loves discovering new acts.
NEWER POSTTHAT WAS THE BOX – February 2016 (Week Four) | TV Reviews
OLDER POSTThe Top 10 Unmissable Films In 2016