ENOUGH SAID – Speaks To Everyone About Love And Life! 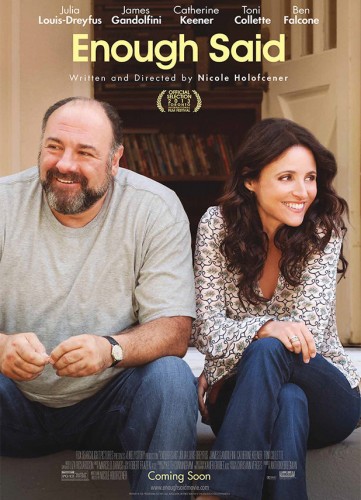 The title for this film is drastically understated. When two of America’s most loved television actors come together on the big screen, it creates a high level of intrigue. Paired with the untimely, tragic loss of one of these stars just months before the movie’s release, people’s curiosity in the film climbs an additional level.

For these reasons, ‘ENOUGH SAID‘ strikes sentiment for a strong audience, and it doesn’t disappoint.

Both Eva (Julia Louis-Dreyfus) and Albert (James Gandolfini) are divorcees who have daughters preparing to leave for college. They meet at a party, and the film tells the story of their natural, and sometimes very awkward, pursuit of a romantic relationship.

When characters “visit” your home and earn a part of your heart on a weekly basis, it’s difficult to relinquish your expectations of their behaviour when you see them again on a screen. Therefore, it takes a few minutes of ‘ENOUGH SAID‘ for the Elaine Benes and Tony Soprano effect to dissipate. However, the two actors portray their new characters with such believability that you fall in love with them, massive flaws included. 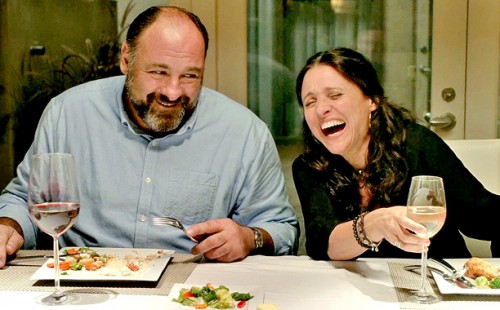 It’s this element of the film that is most enjoyable. Nicole Holofcener created gold when writing and directing this movie. As a romantic comedy, ‘ENOUGH SAID‘ has a raw spin that isn’t often depicted in films. It doesn’t lose itself in too much funny or too much romance. There’s no epic meeting at the top of the Empire State Building or tearful “You…Complete…Me” monologue. It honestly conveys the non-glamorous aspects of rebuilding belief and trust in love after one experiences divorce.

In fact, this film does a fabulous job of showing how flawed love can be, yet the story doesn’t venture in to a ridiculous comedy of errors. While you watch Eva become obsessed with investigating reasons why Albert and his ex-wife parted ways, you sadly see that this guarded approach to her new relationship is causing its demise. It doesn’t help that she is surrounded by other characters, played by supporting actors Ben Falcone, Toni Collette and Catherine Keener, that are all dysfunctional in love and relationships.

Gandolfini’s portrayal of Albert shows the side of Gandolfini that ‘SOPRANOS‘ cast members referenced for years. He is docile, good-humoured and as tame as a teddy bear. ‘ENOUGH SAID‘ features his first leading role in film, and it would have been great to see his character in more scenes. This breakthrough performance is so commemorative because it proves as an actor, James Gandolfini had so much more to say.

‘ENOUGH SAID‘ is now in cinemas. Catch it while you can!

Melanie Todd has lived in Florida, New York and London. She has experience with NBC News and Universal Studios. Currently, she is in the US preparing for a move back to London, where she hopes to work in entertainment publicity/public relations. Melanie enjoys running and drinking wine, but of course, not at the same time. Follow her on TWITTER @MelanieTheRep and visit her blog at www.WhatTheRepShouldDo.com
NEWER POSTBAGGAGE CLAIM – 30 days 30,000 miles. Will She Find True Love?
OLDER POSTThe X FACTOR Blog – Week Two!