HUMMINGBIRD – A STATHAM Film with Heart! 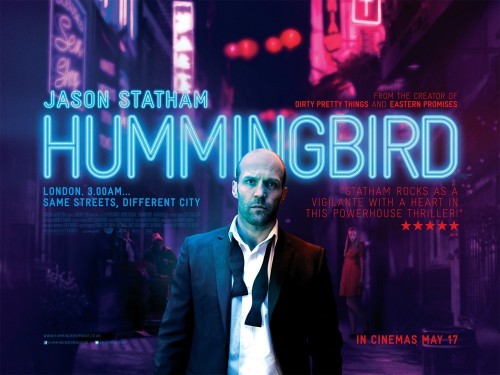 The last Jason Statham film I saw was the inferior ‘Parker‘ – the plot of which I have forgotten already. The premise of ‘Hummingbird‘ sounded appealing to me – a gritty British thriller about an ex-soldier with Post Traumatic Stress who goes on the run, hiding out amongst the homeless of London, before seeking revenge for the death of a pal. Fine on paper, but knowing Mr Statham‘s rather limited acting abilities, I didn’t hold out much hope for it delivering. But I have to say I was pleasantly surprised. Of course there is still the gratuitous violence which has become Statham’s trademark; but in more sombre, reflective moments, he shows that he does have acting chops rather than it being Jason Statham playing himself, regardless of the situation he is in. He actually becomes the character of Joey Jones, the ex-squaddie who cannot move away from the single act of reckless vengeance he committed whilst serving in Afghanistan.

Shot mostly at night, around the streets of Soho, the film never ceases to look seedy as our hero traverses the worlds of Triad gangsters, Russian prostitutes, and down and outs who are willing to exploit whoever they can for money – all the while looking for the young homeless girl he used to chum up with when he was on the street. As he earns money, working as an enforcer for a Chinese gang boss, he becomes a Robin Hood type character, using his new found wealth to improve the quality of life of his former homeless friends. On the way he falls in love with Christina, a Polish nun (Agata Buzek) who runs the soup shelter and is battling her own demons, which are causing her a crisis of faith. 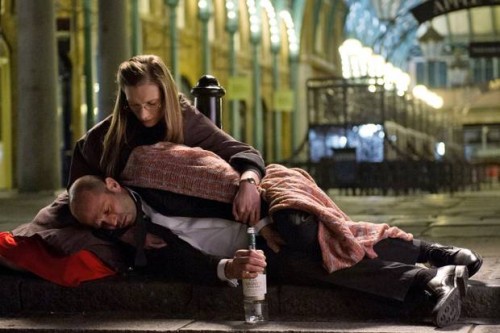 What’s right with it?

There is a strong social message within this film. The plight of soldiers traumatised by battle may not be a new story. But instead of the usual, fey, public-school luvvy we usually see playing a part like this, maybe by seeing a big screen hard man such as Jason Statham crying because of his torment, it might prompt those men who are suffering PTD and embarrassed to seek help, to realise that tough guys suffer too.

What’s wrong with it?

Joey just happens to crash land into a luxury pad whose occupant is away for several months. The same occupant has a wardrobe full of beautiful clothes that just happen to fit Joey, then, when he eventually returns, we see he is actually several inches shorter and punier in build than Statham.

‘Hummingbird‘ is a decent film, and the plot-holes and moments where is wanders in to the realms of implausibility, can be overlooked because of a strong story. It also proves that when the muscle turns to fat and Statham has to stop playing the tough guy, he might just have a future as a serious actor.

‘Hummingbird‘ is out now.

Karen Mason is a London-based writer. She has published fifteen historical fiction novels and is currently working on her sixteenth. She is also an avid movie goer, with a particular preference for gritty British cinema and a weakness for Jason Statham films! Her music tastes stretch from Muse to the Cinematic Orchestra and she loves discovering new acts.
NEWER POSTDANIEL MERRIWEATHER Angry Over CELINE DION Cover!
OLDER POSTBOY GEORGE – New 2013 UK Tour!