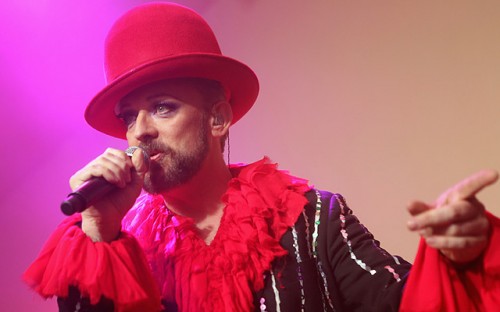 BOY GEORGE is back, better and fitter than ever! Not only is he returning with his first studio album of original material in almost two decades, but he’s also set to play several gigs later this year (2013)!

The album is called This is What I Do and it’s produced by Richie Stevens, who has worked with the likes of Soul II Soul, Tina Turner, Simply Red, and even Culture Club. It’s mixed by Dave Bascombe (Tears For Fears, Depeche Mode, Pendulum, Doves) and features brand new songs written by Boy George. The album features many guest musicians, some of whom are expected to appear as George‘s band on his live dates.

With a career spanning over 30 years he first shot to international stardom in the 1980’s as the front man of one of the UK’s biggest exports, Culture Club, and had continued success as a solo artist. He has sold over 150 million records with top 10 hits in every country.  Aside from his vocal talents, Boy George is a hugely respected house DJ, playing for twenty years, and continues to DJ successfully in clubs all over the world. However it is his new album, This Is What I Do, that reinforces his first true love – writing & singing.

As for the tour, Boy George will be at the following UK venues:

Tickets, which are subject to per-ticket charge plus order processing fee, will be available from 9am tomorrow (28th June, 2013) from www.livenation.co.uk/artist/boy-george-tickets and www.ticketmaster.co.uk

Ed is an entertainment news writer, and founder of TOMORROW'S NEWS. He always keeps a watchful eye on who and what's trending in the entertainment world. His articles focus on tomorrow's news today, including celebrity news, film news, music news and so much more!
NEWER POSTHUMMINGBIRD – A STATHAM Film with Heart!
OLDER POSTA HAUNTED HOUSE – One Parody Too Many?