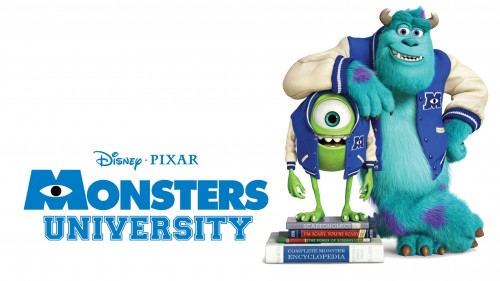 Ask me these questions and I would say ‘Monsters Inc.‘ and a week a go I would have said none, because for me, ‘Monsters Inc.‘ had everything you wanted to watch as a child-fun, colourful and quirky characters, a story that as a child was fun to watch and helped to ease the thought of monsters in the bedroom while you were sleeping. The original didn’t need anything added to make it better so any thought of a prequel or sequel was completely in the abyss.

Ask me the same question after watching ‘Monsters University‘ and I am pleased to say that for once, a prequel was a good idea!

‘Monsters University‘ is the first Pixar prequel and follows Mike Wazowski as he pursues his ambition of becoming a scarer, a monster who must go into the human world and scare young children to fill the scream meter resulting in canisters being filled with energy. The story follows him as he suffers ridicule and abuse from others on his journey through ‘Monsters University‘ where he meets typical jock James P Sulley. The two finally become friends after a hurdle of events, as they discover the true value of friendship and working as a team. ‘Monsters University‘ was a joy to watch and I think that if you are or were a fan of ‘Monsters Inc.‘, ‘Monsters University‘ is not one to take anything away from it but instead gives you a back story on the characters and how they met.

Overall I actually really enjoyed this film considering any other prequel/sequel that I have watched has completely ruined my conceptions about a film, ‘Toy Story 3‘ for example.

One small issue that I have with Disney and Pixar is the fact that they have tried to relate it to real life, which for me, defeated the object of basing a movie around fictional characters. The use of stereotypical Americans – Nerds, Jocks, hot girls gave the film a realistic feel which prevented it from having any mystical or fantasy feeling about it. This type of story has also been done before in films such as ‘The House Bunny‘ where the characters befriend the nerds to become a sorority to be able to participate in a certain event, in this case the ‘Scare contest’. Either way, I was enticed and ended up really enjoying the film especially towards the end specifically when I saw characters that I recognised from the previous film.

If you enjoyed the original, this would be a and has a few moments where you sit back and think ‘ooooh thats cool!’ something that doesn’t happen often in kids films.