‘PRISONERS’ – A Movie That Will Keep You Captive, Even After The Credits! 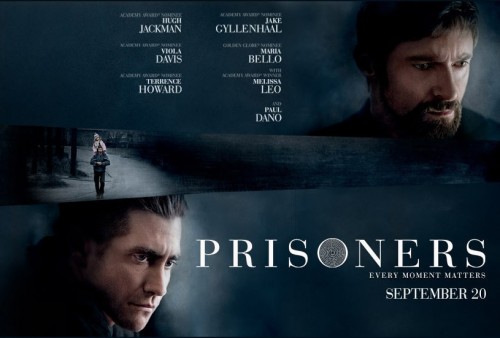 This American crime thriller wastes no time capturing the viewer’s attention. The film quickly begins with two families gathering on the Thanksgiving holiday to share their meal. Near the end of the evening, the parents discover their youngest daughters are missing. From that point, the viewer is rocked by an emotional journey built on a twisting plot, richly developed characters and exquisite acting!

While you really don’t want to think about what you would do in a situation of child abduction, you should know and accept before you buy a ticket that the plot pivots around this torment. Each parent portrayed in the story battles the experience differently, and they all depict raw, believable emotions and actions. Further, a viewer feels Detective Loki’s heartache and turmoil while attempts not only to find the girls, but also intercept the parents’ vigilante justice. 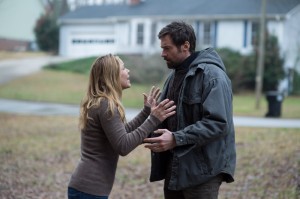 These characters direct you through a wildly unpredictable plot. The suspense is well-paced and intense. The director, Denis Villeneuve, takes the cringe worthy, head-turning torture scenes just to the level of what is necessary to tell the story.

Hugh Jackman’s portrayal of Keller Dover shows he is after the Academy Award for Best Leading Actor that he “Les Missed” this past year. He will be a strong contender again. Equally as impressive are Terrence Howard, Viola Davis and Maria Bello. The scenes where the actors depict happiness and normalcy are few, thus making you commend them for the emotionally draining experience it had to be on the film’s set each day. While Jake Gyllenhaal’s character (Detective Loki) is slightly more controlled, his acting is spot on as well. Gyllenhaal played an LA cop in a story that showed the dynamics of a police partner relationship in his recent film ‘END OF WATCH’. In ‘PRISONERS’, he plays a small-town detective working in absolute isolation. He approached each role differently and with separate dimensions.

Who should see this movie? Its structure and presentation of moral questions would keep any film club member or cinema-goer engaged in conversation for hours. The dialogue has the level of profanity you would expect from characters in this experience – no more, no less. Police would appreciate the perspective of Detective Loki. If you are interested in a damn good movie that will handcuff you from the very beginning, and most likely not release you, it would be a crime not to see ‘PRISONERS’!

‘PRISONERS‘ is currently in U.S. cinemas, and it will be released in the UK from the 27th September, 2013.

Melanie Todd has lived in Florida, New York and London. She has experience with NBC News and Universal Studios. Currently, she is in the US preparing for a move back to London, where she hopes to work in entertainment publicity/public relations. Melanie enjoys running and drinking wine, but of course, not at the same time. Follow her on TWITTER @MelanieTheRep and visit her blog at www.WhatTheRepShouldDo.com
NEWER POST‘DON JON’- A Movie Your Nan Might Want To Skip!
OLDER POSTDANIEL RADCLIFFE Denies FREDDIE MERCURY Role Rumours!