Sometimes one more friend request is one too many! 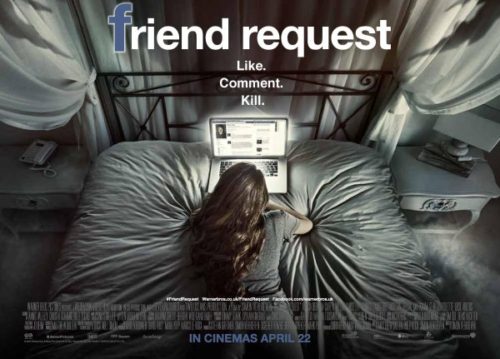 Feeling like a new kind of horror? Well try out social media horror by watching this film. ‘Friend Request‘ directed by German director Simon Verhoeven, will give you a new kind of scare that will make you think twice about accepting a friend request from someone you hardly know.


Alycia Debnam-Carey stars as Laura, an astonishingly popular psychology student with over 800 friends on Facebook. 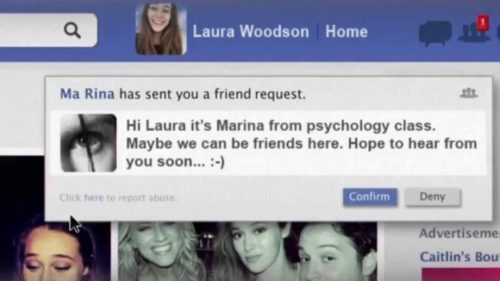 Her world turns upside down when she accepts a friend request from Marina (Liesl Ahlers), a girl she barely knows from college. Laura is surprised to learn that she is Marina‘s only Facebook friend.
It all starts to get interesting when Marina gets too attached to Laura.


Laura eventually decides to unfriend her when things get too much, and because of this Marina commits suicide via a live webcam video she sends to Laura.

Laura‘s popularity and friend count starts to drop as people begin posting awful things all over her Facebook profile believing that she caused poor Marina to kill herself.


The horror really begins when Marina‘s vengeful spirit haunts Laura and her real friends start dying all around her. Marina’s mission is to make Laura see what it feels like to be lonely; as lonely as she was.

This film has that creepy, psychological feel from the ‘Final Destination‘ films and impending ghastliness from the ‘The Ring‘. It also makes you think of other horrors and thrillers like: ‘Single White Female‘, ‘The Shining‘, and ‘Amityville Horror‘. 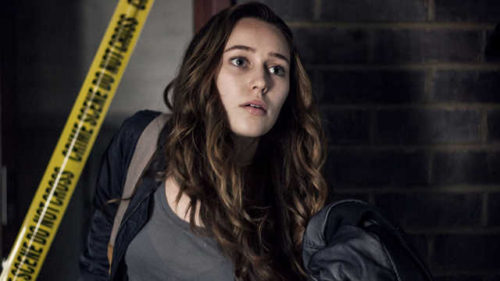 Alycia Debnam-Carey is good in this film, pulling off a great performance. She makes you like her character and genuinely feel for her when all the bad, horrific events start happening.

‘Friend Request‘ will definitely thrill and scare you. It has all the jumpy scenes; the ones where the lights go out and others where you hear all kinds of noises that will make you want to sleep with the lights on.

It’s done in a very stylish and interesting way that you’ll definitely appreciate.

Khardine Gray writes fun, romantic fiction and is currently working on her second novel due to be published by the end of the year. She loves any film done by Marvel and all super hero films. She also loves thrillers, films with fast cars and action films. In her spare time when she isn't writing you can find her taking full advantage of an ice rink, or any ballet class she can find. Or, simply shopping and enjoying a good pizza.
NEWER POSTEYE IN THE SKY: “It’ll Engage Your Mind For Days”
OLDER POSTCAPTAIN AMERICA: CIVIL WAR – “It’ll Set you on Fire”