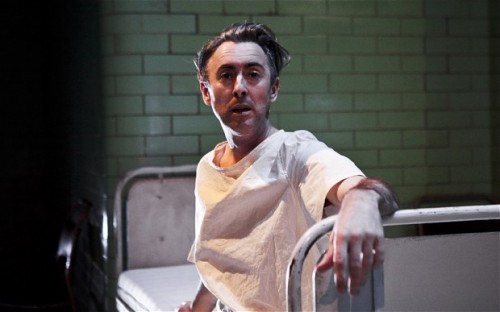 Directed by John Tiffany and Andy Goldberg, this modern yet innovative adaptation of the Shakespeare classic will have the Tony Award winner starring as an inmate in a mental asylum , and admits playing all the parts in the script has been a challenge!

In an interview with the UK’s Daily Telegraph and The Guardian, he says:

“Speaking to John Tiffany in New York earlier this year, I had this idea I wanted to swap the roles of Macbeth and Lady Macbeth, because there are so many things about gender, I thought it would be a really exciting idea to flip that. So we did this reading like that, in New York, and Andy Goldberg had this idea I should just play all the parts.

“I started to itch to do a play again and Macbeth came to the surface in my mind. I never thought I would do it in a conventional way. A sweaty Macbeth with blood on his arms coming in fresh from the battle doesn’t interest me…

“It’s nuts, what we’re doing. Nuts!… The adrenaline you feel is like the equivalent to having a minor car crash.”

“Guess whose it is?

“Once in a while it’s good to challenge yourself in a way that’s really daunting.”

‘Macbeth‘ will have its debut at The National Theatre of Scotland later this month (June, 2012) before transferring to New York’s Lincoln Centre in July 2012.

Ed is an entertainment news writer, and founder of TOMORROW'S NEWS. He always keeps a watchful eye on who and what's trending in the entertainment world. His articles focus on tomorrow's news today, including celebrity news, film news, music news and so much more!
NEWER POSTALEXANDER SKARSGARD – The New Face Of CALVIN KLEIN!
OLDER POSTNew Photos Of LOHAN And BOWLER From ‘LIZ & DICK’!