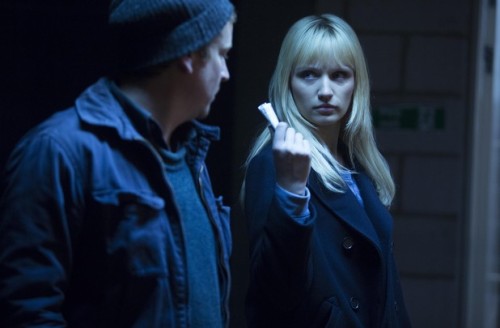 Ahhh it’s all getting creepier. I’m definitely beginning to think our synth friends were once human beings. They appear to possess human DNA, and then there’s the whole emotion thing, and now it seems that Leo is Dr Millican’s ex colleague’s son who died. Apparently Dr M distanced himself from this colleague because he was taking things too far. Did that include remaking his dead son as a synth? I’m wondering if there is some uprising from within planned, even down to my astute guessing that policewoman Karen is actually a synth. That weird thing she extracted from her throat at the end of the episode certainly pointed to it.

We had a change of heart, where mum Laura now wants to keep Anita because there is more to her than meets the eye, and she met another woman whose synth appears to have emotions. But dad Joe wants rid. Purely because he unlocked Anita’s ‘adult’ option and had his way with her. Now he feels dirty and ashamed because he had sex with a robot, and Anita has served her purpose. Even more yucky is that it transpires Anita is fourteen years old. Yucky that he had sex with a fourteen year old, and also she’s clearly reconditioned and goodness knows what she was used for, before.

I would like to know why Detective Pete always looks as though he’s busting for a number two.

And can we give Niska her own show? That girl seriously kicks ass. I loved it when she attended the barbaric, underground synth fighting game and she attacked all the humans participating. In my dreams, dogs involved in dogfighting do the same thing. Niska is seriously rogue, and it’s intriguing to know what she’ll do next. But all the while we feel sympathetic to her, because the synths have been given a pretty rough deal and they stand for everyone who is oppressed in society.

I feel sorry for anyone wanting to open a shop in Essex. It seems you have to be a cast member of ‘The Only Way is Essex‘ in order to be granted permission. Danni now has a boutique, and Lockie has a bar which looks like a public convenience from the 1950s. There is also another café with the same interior, where Vas and Lauren were seen eating in, and either it’s a redevelopment of a suite of 1950s public conveniences or it’s a set. 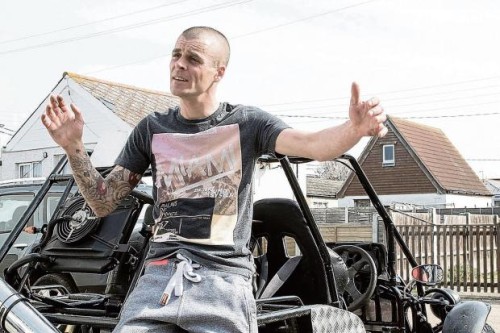 For me, this was like ‘TOWIE‘ if it had been written by Dickens. It was set in Essex, and it starred a variety of characters whose speech was at times ineligible, but the difference was they were chronically poor. Jaywick has been declared the most deprived place in England. Most of its residents are on benefits and nearly everyone is living below the poverty line. I could only watch it and wonder what sort of effects Gideon’s latest budget will have on these people.

Apparently Jaywick used to be a thriving seaside town, but it has gone to wrack and ruin over the years and now it is the sort of place you drive through if you accidentally find yourself there (although if The GC was on the warpath, I’d feel the same way about Brentwood). Rather than Channel Five’s usual serving of Poverty Porn, highlighting how jolly well off the scroungers were, this one showed the reality of living hand to mouth. Like poor old Fred, the former East End gangster who now lived in a shabby caravan with his many cats and no heating. Fred had done bad things in his past, like shooting a man in the face, but it was hard to see this, and all that was visible was a lonely old man who was estranged from his children, whose life had spiralled out of control. Dan, a kindly local councillor was trying to help him, but Fred was resistant to change. In a town where life expectancy is low, I suspect Fred will soon become another statistic.

We also met Jay, who never went to school and only learnt to read in prison. He also kicks his dog, so I hope the RSPCA were watching this. I was actually amazed at how everyone in Brooklands (the roughest part of Jaywick) had dogs. Believe me, dogs are lovely but they don’t come cheap. How can they afford to feed them? Jay was a bit of a numbskull who kept having the names of his girlfriends tattooed onto his body, and invariably had to have them covered up. Anyway, he kicks his dog, so I’m not going to bother with him.

There was also single dad Carl and his two teenage daughters. Leah, his youngest daughter looked like a genuine Victorian urchin and was probably the most moodiest child I have ever encountered. When faced with the prospect of moving from their horrible home to a nice new house provided by their uncle, she froze and refused to move, and ranted like someone being led to the execution chamber. In all fairness to the poor kid, the lovely house they were going to was only on a temporary basis, until it was sold, then they would be homeless again. Talking of selling houses, a bungalow in Brooklands can sell for £40k. A dustbin cupboard costs more than that where I live! Maybe this accounts to why Susie and Barry, the local landlords also looked poor.

I think seventeen year old Louise and her family should be given their own reality show. It could be like a poor version of ‘Keeping Up With The Kardashians‘. Louise spoke loudly all the time, and seemed to treat Anita, her mother as if she was educationally subnormal, and when poor Anita got a knife pulled on her whilst walking her dog, instead of complying with her wishes and letting it lie, Louise called the police and spoke really loudly again! Her ambition is to become a care assistant. A very noble job indeed, but it does say a lot about the income level in Jaywick, when a dream job is something paying minimum wage which is normally forced upon people who have been on the dole too long.

One thing I do want to know though, is how did Carl pass his driving test if he can’t read or write? I’ve got a degree and I found the theory exam pretty hard. How would you be able to do it if you couldn’t read a road sign. I take back what I said. No wonder his daughter looked scared to get into the car with him.

Karen Mason is a London-based writer. She has published fifteen historical fiction novels and is currently working on her sixteenth. She is also an avid movie goer, with a particular preference for gritty British cinema and a weakness for Jason Statham films! Her music tastes stretch from Muse to the Cinematic Orchestra and she loves discovering new acts.
NEWER POSTNew Trailer: FANTASTIC 4 (2015) | FILM TRAILERS
OLDER POSTTed’s Got Soul In ‘TED 2’ | MOVIE REVIEW