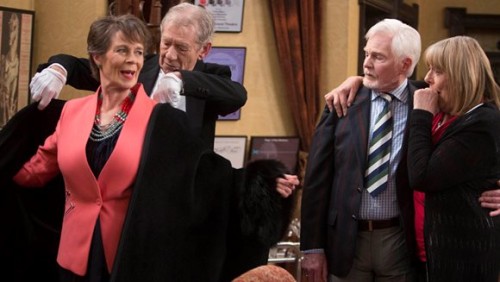 I put my hands up. I love ‘Vicious‘. It might be full of stereotypes, and a lot of the humour straight out of the 1970s, but it has me laughing out loud pretty much from the moment it starts. Back for a new series, we find Stuart and Freddie still locked in their love/hate relationship, surrounded by a cast of eccentric characters, my favourite being their friend Penelope, who clearly lives in her own little world. This week, their friend Violet was trying to convince her sister (played by the wonderful Celia Imrie) that her life was a great success. She pretended to be married to Stuart, Freddie was their butler, and Penelope the maid. Simultaneously, Ash the hunky young neighbour had started dated a young girl called Jessica (played by the beautiful and batty Georgia King) and they ended up becoming part of Violet’s deception, with Jessica believing that the ridiculously camp/butch Stuart was Ash’s father and Violet his step mother.

Needless to say, it all ended in chaos, but under all the bitching and sniping, the core of it is that it is about two elderly men who are at once devoted to each other, and also so vile, no one else would have them. I think they do love each other, it’s just hard to tell. It was a testament to the acting of Sir Derek Jacobi, who has played ‘straight’ in so many things, that he pulled off the pretence of Stuart being unable to pretend to be butch. I find elements of Joe Orton in the programme, especially the way Violet, Freddie and Stuart all lust after Ash, it reminds me of ‘Entertaining Mr Sloane‘, and because of the way this is filmed – primarily in Freddie and Stuart’s living room, it could easily be transferred to the stage.

For once ITV have got a comedy right and I hope ‘Vicious‘ runs and runs until the two sirs are really really old and incapable of being vicious. 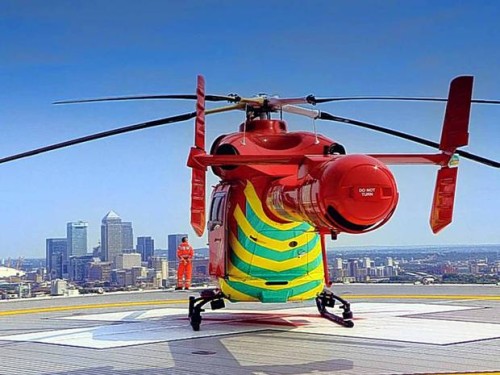 I hope David Cameron and George Osbourne had the chance to watch this fascinating programme before they start drafting up their alleged plans to dismantle the NHS. By the end of the show, I was so proud to be from a country where such wonderful, free healthcare is available, that it would be a crying shame to lose it.

The programme followed three emergencies in the ‘Golden Hour‘ – that sixty minutes where lives can be saved or lost. There was Tony, an elderly man with a tear in his aorta which meant he was bleeding to death internally. The remarkably calm doctors opened him up and fixed his central artery with less fuss and complaining than your average car mechanic replacing an exhaust pipe. Elsewhere in Yorkshire, a little boy called Blake had been run over and as well as a broken leg he also had suddenly lost his sight. Frightened that he had suffered brain damage, the paramedics rushed him to hospital where he underwent a scan which revealed a fractured skull, which whilst nasty was so much better than it could have been.

The stand out story was Janina, the young German student who had been crushed, along with her bike, under the back wheels of a lorry. With the calmness of someone changing a tire on their car, the paramedic in charge, opened up Janina’s chest to massage her heart into working again, whilst a colleague held onto her aorta to stop her from bleeding to death. The sheer determination and bloody-mindedness of these men in not letting the girl die was just breath-taking. Once she was taken to the Royal London Hospital, she was in the hands of a team of doctors who were equally determined to save her life. Miraculously, her heart, which had gone into cardiac arrest, started beating again on its own, which kept her alive for long enough for her mother and husband to come from Germany to say goodbye. Ultimately, her injuries had been too catastrophic for her to survive. But at least her family have the comfort in knowing everything single possible thing had been done to save her.

The programme was both life affirming – every single one of us is precious, but at the same time, scary because all three patients had started their days just like any other, and for Tony and Blake, things would never be the same again, and poor Janina who never got to see her loved ones again. Next time there is a scaremongering story on the news about A&E waiting times or ambulances being delayed. Watch this programme on iPlayer and remind yourself just what we stand to lose if the government are allowed to change our NHS forever. 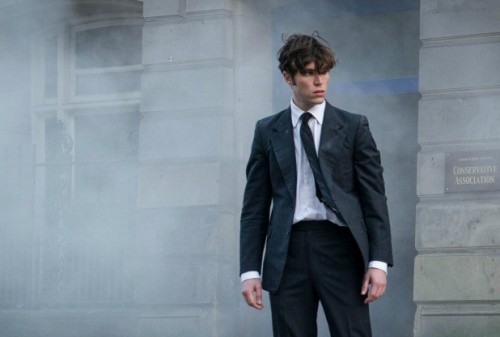 And so our weekly dose of 1970s espionage came to an end, with many questions still to be answered. Namely, is Julia, Joe’s love interest actually working for the other side? Exactly, who in positions of power are still Russian sleepers, and mostly, will Bobby and Wendy get married? Their double act has been one of the highlights of the show for me. Closeted Bobby, who is desperate to please his mama, and uptight, head girl Wendy make an interesting pair, and indeed it was Wendy who helped get to the root of Operation Glass and Bobby told Daddy this. Sort of.

I had pretty much guessed who the mole was, as soon as Anderson – sorry, Alan did the dead drop, but seemed so out of his depth that it was pretty obvious he was covering for Sarah. That was one of the weaknesses of ‘The Game‘, because it was similar in so many ways to ‘Tinker Tailor Solider Spy‘, it came as no surprise to find the genial, seemingly patriotic Sarah was indeed the traitor. After all, in ‘TTSS‘, Bill Haydon seems laid back and loyal to his country, and yet he is the mole. The other weak point for me is the star of the show. While Tom Hughes, who plays Joe Lambe, is very handsome and brooding, and all the rest. He never quite fitted into the 1970s setting. He would always seem like someone who had come from 2015 and was thrown into the 1970s, like a spy version of ‘Life on Mars‘. Even the revelation that he was a victim of childhood abuse wasn’t enough to excuse his demeanour. I actually think it’s quite unlikely someone working class like Joe would have made it to the upper echelons of the Secret Service, forty odd years ago, without a long army record and he looks far too young to have been in the military for long enough for him to move into intelligence.

But at the end of the day, this wasn’t a documentary, it was a drama to keep us entertained and I certainly enjoyed it. For me I would like to see a second series, but it would be far more interesting if they swapped Joe for Kate, Rachael Stirling’s character. Like Joe, Kate’s loyalties at times seemed ambiguous and there have been far too few female spies on television.

Karen Mason is a London-based writer. She has published fifteen historical fiction novels and is currently working on her sixteenth. She is also an avid movie goer, with a particular preference for gritty British cinema and a weakness for Jason Statham films! Her music tastes stretch from Muse to the Cinematic Orchestra and she loves discovering new acts.
NEWER POSTTHAT WAS THE BOX – June 2015 (Week Two) | TV Reviews
OLDER POSTTHAT WAS THE BOX – May 2015 (Week Three) | TV Reviews