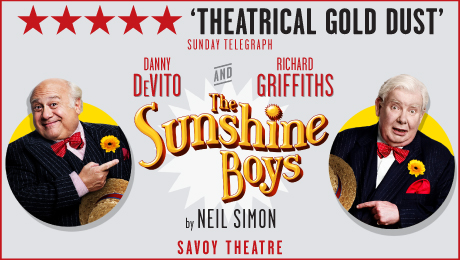 ‘The Sunshine Boys‘ is a play by Neil Simon that was produced on Broadway in 1972 and later adapted for film and television.

The play focuses on ageing Al Lewis and Willy Clark, a one-time vaudevillian team known as “Lewis and Clark” who, over the course of forty-odd years, not only grew to hate each other but never spoke to each other off-stage throughout the final year of their act.

In its latest guise, Danny DeVito and Richard Griffiths are the stars of the show. I must admit, I was not aware of the story before I went to see it, but I thoroughly enjoyed myself.

The story ultimately is one of friendship and what it means to be friends with some one. The play portrays the light and the darkness that is often found in lasting friendships and the story does well in illustrating how difficult yet easy true friendship is – superbly brought to life by Griffiths and DeVito. 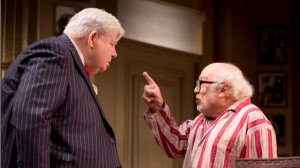 As the lights went down, DeVito is alone on stage in an empty New York Hotel room suite where he lives. From the first second to the last I was captivated by the talent of the man – not that this captivation came as a surprise to me, as I have been a huge fan of his from since I can remember. DeVito though small in stature delivered everyline line a giant and had the whole audience captivated.

Seeing DeVito in the flesh softened me to the play, after all it is not everyday you get to see a Hollywood super star, that you have watched in films and shows since you can remember. Griffiths was by no means cast into the shadows, as he provided some moments of brilliance amongst an already great performance.

The real success of the play was seeing Griffiths and DeVito work so well together. The combination of comedy and sincerity they brought to the stage led to some really poignant and moving moments throughout the play. The plot is simple but the tenderness and class of the two leading men brought warmth and energy I have rarely experienced in a theatre. Although mainly a comedy, Simon engagingly explores the shadows that are inevitably created by sunlight, in the play’s sadder moments.

As you would expect this play is highly enjoyable and seeing DeVito only adds to the enjoyment. Together DeVito and Griffiths’ explosive personalities, reflected in their performances, lit up the stage.

What more could you want from a West End play?