THE BOOK OF MORMON – Controversial, Hilarious and Thoroughly Entertaining!

I would like to tell you about… this incredibly funny musical penned by Matt Stone and Trey Parker the team behind ‘South Park‘ and ‘Team America: World Police‘. The lyrics were done Robert Lopez the man behind ‘Avenue Q‘.

The opening number of hello with the doorbells is hilarious and you just know that you are in for a pants-wetting, sore cheeks from laughing type of evening. You will get all types of choreography in this musical from tap, swing, jive and slapstick; anthems and ballad and lament.

So we join our new friends the Mormons fresh out of their training and ready to go out on their two-year missions. Each is called forward and paired with another and told of the country/city where they will be carrying out their work.

The story is told not with finger poking sarcasm but actually reverence to the teachings from the Mormon Church. Who is to say that Joseph Smith didn’t discover the third book of the bible in 1823 in a field by American Angels. He cannily refused to show anyone the American angel tablets, which he used to write the book of Mormon and the teachings he passed down to others. It does point the finger about whether this is just a bunch of made up mumbo jumbo that may actually lead to something bigger.

The musical numbers are superbly titled and I don’t think there was one song that you didn’t laugh along and maybe miss a few lyrics.

We move to Africa where the two missionaries will carry out their work and convert people to the Mormon church. The lyrics of things song get darker and darker. At the end of the song you wonder should you really have laughed at the fact they covered, AIDS, Baby Rape, Malaria and a way to repay God in mysterious ways. 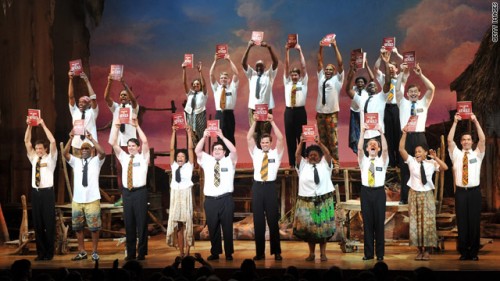 The whole thing is controversial and I would urge you to go along with an open mind. If you have seen ‘Team America; World Police‘, you may remember the musical scene from it. Expect a bunch of these types of songs and the same sending up of Americans they did in this movie.  There will also be one or two cultural references that are US specific, and you may not laugh at them as you may not understand it. But it doesn’t deter you, as it will pass you by.

I absolutely loved this show and was so glad we managed to get tickets for it. I would definitely go back and see it again.

If you don’t like ‘South Park‘, ‘Team America:World Police‘ or ‘Jackass Presents Bad Grandpa‘, then go see ‘Let it Be – The Beatles Tribute’ or ‘Mamma Mia‘.  If you do like them you are in for a toe-tapping, belly-laughing, shocked-they-went-there kind of evening.

I haven’t seen any of the cast members in anything before, but each and every one of them was worthy of a standing ovation. I still have in my head the scene when the Elders of the Church have come to see how the mission is going as they seem to have a lot of new Baptisms. The Africans rendition of the book of Mormon will have you on the floor with laughter, well unless you are a Daily Mail reader that is!

TIP: If booking tickets, try to get tickets in the middle of the rows and not towards the walls, it sometimes seems a little quieter at times.

Mark is known to his friends as LEGOBear. He loves LEGO Star Wars and buildings. He is an avid Movie Fan and has a Cineworld Unlimited Card so watches a lot of the latest releases. He is also a friend of the owner of this site so that is why he has gotten involved.
NEWER POSTTHAT WAS THE BOX – January 2014 (Week Two)
OLDER POST’12 YEARS A SLAVE’ – Gripped And Shackled With Emotion To The Very End!