Note to the producers of ‘The Only Way is Essex‘. ‘Coronation Street‘ spin-offs set in Africa – not funny. ‘Emmerdale‘ – the ‘Dingles do Las Vegas‘ – not funny. ‘Eastenders‘ go to Ireland – more depressing than usual. What I’m getting at is that soaps work best when they’re in their usual environment, and ‘TOWIE‘ works best when it’s best in Essex. The Ibiza special was such a snoozefest, and felt so pointless, I was drifting off and thinking about other things. As soon as it returned to Essex, things picked up somewhat and regained my interest.

Tom Pearce has now latched onto newbie George Harrison (I shit you not), and his idea of a date was taking her to make sushi. In the last series, his dates involved wine tasting. I get the feeling Tom finds making conversation with girls quite difficult and therefore all his dates require an activity, so they have something to talk about. You just know that George is going to end up leaving Tom for new bad boy Lewis Bloor, because that’s what happens. Going out with Tom P is like a rites of passage for all new girls to ‘TOWIE‘.

When Joey Essex left, we needed a new bozo, and this role has been filled by newbie, Tommy ‘Timmy’ Mallet, as I like to call him. Apparently they’ve all known Tommy for years, but somehow have forgotten to mention him, and he is like Joey without the sweet nature. At the moment he is dating Georgia, and the chemistry between them seems quite genuine. I wouldn’t trust Tommy as far as I could throw him though, so I’m sure the cheating allegations will soon start.

Lauren Pope really needs to learn to trust a bit more. Yes, Lewis was vile to her, but whenever someone apologises to her, she accuses them of just doing it for show (she did the same to Chloe) and she rejects them. Keep up like that and she’ll end up a lonely old woman.

Why has Charlie Sims turned Amish? (I still would though)

Who had the bright idea of putting Arg in white trousers? My eyes….

And I thought Lydia was supposed to be the intelligent one, and yet she didn’t know what a vista was.

Why has Nanny Pat given herself a Camilla Parker Bowles makeover? (although she still looks younger than CPB)

Finally, we saw the break up of Elliot and Chloe. I can’t say I blame her. The man’s a caveman. It’s the 21st century love, a woman is capable of making decisions for herself. He really needs to take a chill pill and learn to get in touch with his feminine side. 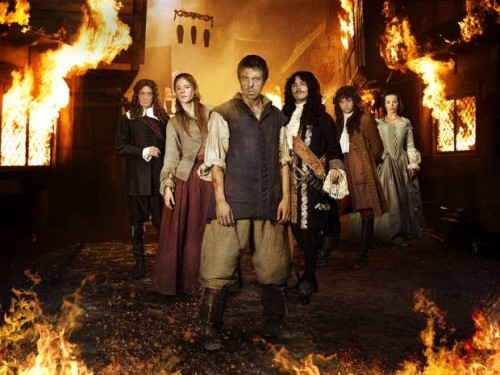 I had great hopes for this drama, penned by ITV news correspondent Tom Bradby. And I have to say, I was sorely disappointed. I fear Bradby suffers from what I call ‘Fellowes Syndrome’. For me, as a writer of historical fiction, the key to writing anything set outside of living memory, is to make the characters as relatable as possible. I still think ‘Downton Abbey‘ concentrates far too much on the upstairs, when for 75% of the British population, our ancestors were strictly downstairs and this is where Fellowes Syndrome comes from.

‘The Great Fire‘ concentrated far too much on the political conspiracies behind the fire. Luckily for me, I had recently been watching a series of documentaries by St Lucy Worsley about the women of King Charles II’s court and so I had some idea about the Restoration and the politics of the time; but for anyone else, I am sure they would have been more interested in the ordinary occupants of Pudding Lane, than the machinations of King Charles’ advisors, Papal plots, and Daniel Mays playing Daniel Mays. Sorry, Samuel Pepys.

The story dragged, and for half an hour you were waiting for the fire to start. Once it did, it spread very slowly given the houses were made of wood and it was the middle of summer. The dialogue was far too modern, and I’ve a feeling the Cockney accents used were far too 2014. Naturally, I have no knowledge how people spoke in 1666, but I find it doubtful a little girl would tell her father she was ‘scared’ – surely she would have been ‘afraid’.

I don’t think this drama is suited to ITV and would have been better on BBC2 or BBC4. ITV is the channel of the people and needs something everyone could relate to. Hate to say it, but I won’t be tuning in to episode 2, I’ll just read a book about it instead. 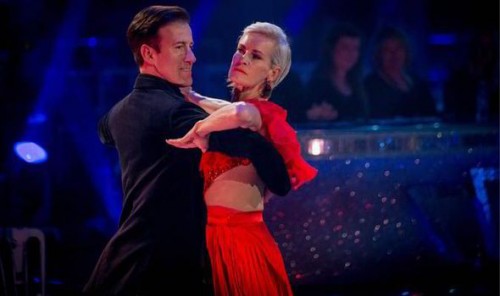 Please please judges, stop that stupid dancing intro. All that ego stroking is worthy of the ‘X-Factor‘ and I thought ‘Strictly‘ was above that.

I’m still finding the series a little ‘meh’ but tonight had a bit more umph, I think because there are fewer people now, so it’s a bit easier to concentrate. I still think the show is in need of a shake up, but here we go, my take on the acts.

The show opened with Frankie Bridge, who I feel is always playing second fiddle to Pixie Lott in the pop princess stakes. I prefer Frankie. She seem less eyes and teeth than Pixie and there is a bit of grit in her performance. Together with Kevin she gave a sexy cha cha cha and deservedly got 32 points.

Mark and Karen did a quick step to Tiger Feet. I have happy memories of Tiger Feet and dancing around to it at London Zoo when I was 3 years old, so when I hear it, I become a child again. Mark is improving week by week, and I don’t think ‘Strictly‘ is going to throw up another performance like his Superman paso last week. For his quick step, he was fast and precise and he’s such a sweetie when he gets all emotional at the end of every dance. I thought he deserved more than 29.

The tango was the perfect dance for Judy Murray. It requires the dancer to be stiff and angry-looking, which is something Judy has perfected. She was pretty crap, but not as crap as she’s been before and managed to score 22 points. For me it’s terrible that she was not in the bottom two last week and we lost Jennifer and the lovely Tristram instead. Even more shocking was that Simon Webbe was in the bottom two. His rhumba with Krystina was sexy and sultry and I really don’t know why the judges didn’t like it. This week they did a Charleston to My Old Man Said Follow The Van, dressed as a pearly king and queen. The performance was cheeky and full of life, and they deservedly got a score of 31 points.

I have a love/hate relationship with Alison. Whilst she is a very good dancer. She isn’t a ballroom dancer. She is remarkably light on her feet for someone who is so heavy, and her personality suited the samba she danced to Bootylicious by Destiny’s Child, but there’s no getting away from the fact that she cannot physically do the steps how they’re supposed to be done. And as the chaff starts leaving the competition, just leaving the wheat, I’m afraid Alison’s lack of ability will become more evident. I felt the score of 27 points that she got, was far too generous.

Speaking of chaff. Who is voting for Scott Mills? He has no personality and cannot dance and name dropping Robbie Williams and inviting your little niece to watch you rehearse is not enough to make you interesting. On the other hand, we have Steve Blacksall, who is a really nice guy, and a good dancer, but he’s so boring, I glaze over when he’s on. And whose idea was it to put him and Ola in horrible, clashing outfits?

Pixie Lott got so emotional after her rhumba that we got lots of Edina Monsoon-style squish squish crying. Maybe I’m doing her a disservice, but I always think that there is something of the stage-school in her and I feel I’m never getting the real her. I was surprised when Len actually criticised her – I thought she was his favourite. She still scored 32 points.

Please someone put Tim Wannacott out of his misery. His paso doble was pitiful, and consisted of Natalie dancing around him, while he stomped and looked daft. The most ironic thing was that they were dancing to Simply The Best. Funniest thing was when Bruno called him a ‘mildly irritated goat’ how fitting. Trouble is with Tim, I actually think he’s convinced he’s better than he is.

Unfortunately for Sunetra Sarker, she’s a nice woman and a good dancer, but there is something forgettable about her. If it hadn’t been for Brendan’s trousers ripping at the crotch, I would literally have no recollection of her performance. Similarly with Thom and Iveta Frozen Face. Their performances are so asinine and nice that they stir nothing in you whatsoever.

I think Jake Wood peaked too soon with his salsa. His jive was very good, but he stumbled in places and pulled uncomfortable expressions with his face. Someone he and Jeanette still managed to score 33 points, but I think he was over-marked.

Dark horse of the competition is Caroline Flack, who puts those fabulous pins to work by dancing brilliantly every week. This week it was a quick step, which was fabulous, and deserving of the score of 33 she got.

If there is any justice in the world, Tim will go to tonight, but I’m predicting the bottom two to be Mark and Judy – and Judy will go.

Karen Mason is a London-based writer. She has published fifteen historical fiction novels and is currently working on her sixteenth. She is also an avid movie goer, with a particular preference for gritty British cinema and a weakness for Jason Statham films! Her music tastes stretch from Muse to the Cinematic Orchestra and she loves discovering new acts.
NEWER POSTTHAT WAS THE BOX – October 2014 (Week Five)
OLDER POSTTHAT WAS THE BOX – October 2014 (Week Two)