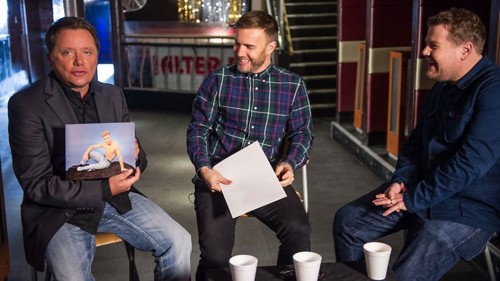 In the words of his former nemesis Robbie Williams, Gary Barlow is a renaissance man. He has gone from smug pop star to national laughing-stock to national treasure in twenty years and it did seem quite fitting that there was a programme to chart this, as stories like this rarely happen. A bit strange how James Corden reckons he’s always been a massive fan of GB, when back in the late nineties he was happy to play a fat, useless boy band member called Gareth, that was so clearly based on Barlow, in a show called ‘Boyz Unlimited‘. But I guess we’ve all done things we regret for money (see last week’s review of ‘Love For Sale‘!).

I admit it, I am a ‘Thatter’ and enjoyed this show a lot – largely for the truly cringe-worthy clips of the boys from back in their ‘twink’ phase. It was also interesting to see Nigel Martin-Smith, the band’s former manager. Who now appears to work in a bar and have the world’s total supply of Botox in his face. It was impossible to watch Martin-Smith without thinking of Fergus Craig‘s interpretation of him in ‘Star Stories‘, casting him as the devil incarnate (hopefully on YouTube).

I have to say Gary Barlow comes across as a thoroughly nice bloke. He was never going to be the exciting pop star like Robbie. But as he says himself, he now suits being the age he is and his middle of the road pop is far more suitable for a middle aged man to play. A touching moment was when he gate crashed a superfan’s wedding, although I am in agreement with James Corden and when he said he felt sorry for the groom. He was quickly forgotten when Gary entered the room.

Being the same age group as Robbie and Gary, I now look back and feel slightly ashamed at the glee I felt back in the day when Robbie slagged Gary off on a daily basis. It all seems so childish now and to hear how becoming a laughing-stock made him scared to leave the house and pile on five stone is horrible to hear. If it’s any consolation to Gary, he’s in better shape than Robbie now anyway!

Corden and Barlow worked well together. It was like a bloke and his cheeky younger brother. The banter between them was natural although I did feel a bit scared for the other road users when Gary Barlow kept taking his hands off the wheel to do a dance routine or pretend to be playing the piano.

The end was touching when he revealed Let Me Go was about his stillborn daughter and indeed when you listen closely to the lyrics the song isn’t as jaunty as the music would have you believe. A sad, but poignant ending to a show that if anything, taught us that no matter who you are, when the chips are down, there is always something good around the corner.

Although, with today’s headlines, the tax man might have something different to say!

I can’t believe a reviewer commented on Rosie Cavaliero’s size. For one, she’s not even fat. She’s just an average size woman, and also, why does no-one point out that sixty-eight year old Brenda Blethyn is playing Vera, a copper? In real life, she would have retired years ago. Oh no, it’s easier to pick on a woman’s appearance isn’t it?

Anyway, off my soapbox. ‘Prey‘ continues to grip us by the short and curlies as we wonder if poor old Farrow is ever going to clear his name. He truly is a master of disguise and his genius move in letting the ticket office attendant see him without his disguise to make him think he’s got onto the train was a work of genius.

Don’t get me wrong, parts of ‘Prey‘ are quite ludicrous. Farrow’s arm and shoulder have miraculously recovered, and it seems that as long as he puts on a pair of glasses, no one – including his own former colleagues – recognise him. But that’s part of the fun of the programme. It’s over the top and bombastic and escapist (excuse the pun). I suspect I will have forgotten it in six months time, but who wants ‘Broadchurch‘ or the ‘Line of Duty‘ all the time? Some of us want the televisual equivalent of McDonalds and ‘Prey‘ is that. I can’t wait for Monday’s instalment to find out what happens. 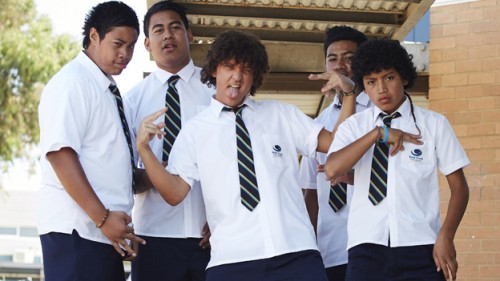 After the disappointment of ‘Ja’mie Private Schoolgirl‘, I almost had to force myself to watch ‘Jonah From Tonga‘. In this, Chris Lilley plays the badly behaved Tongan boy Jonah Takalua that we met first in ‘Summer Heights High‘. It is still a bit weird seeing a 40-year-old man playing a 14-year-old boy, having horseplay with real teenage boys and leering at real teenage girls. But once we get past that, I have to say the show was really funny. I went to school with plenty of Jonahs – bright boys who either from a lack of encouragement, cultural difference or indeed a lack of confidence, choose to play the fool and let their boredom get the better of themselves, rather than use their brains to move on in life. Jonah dreams of going to uni and being rich, but we all know Jonah is going to end up in prison – boys like him always do.

After a while, the gay insults, racial slurs and bad language starts to grate, but that is how teenage boys speak. – I think it’s something to do with the testosterone fogging their powers of communication! It did take me a while to realise a ‘ranger’ is someone with red hair. I still don’t know why Tongans refer to themselves as ‘fobs’.

We all know Chris Lilley needs to give Mr G his own spin-off shoe. But while we wait, ‘Jonah From Tonga‘ will do.

PS: ‘Cardinal Burns‘ is still am-az-ing. I think I might be a bit in love with Dustin Demri-Burns.

Karen Mason is a London-based writer. She has published fifteen historical fiction novels and is currently working on her sixteenth. She is also an avid movie goer, with a particular preference for gritty British cinema and a weakness for Jason Statham films! Her music tastes stretch from Muse to the Cinematic Orchestra and she loves discovering new acts.
NEWER POSTTHAT WAS THE BOX – May 2014 (Week Two)
OLDER POSTTHAT WAS THE BOX – April 2014 (Week Five)