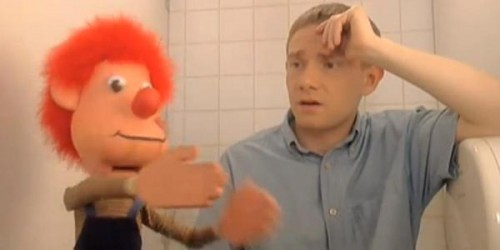 For those not in the know, BBC2 is celebrating its fiftieth anniversary this year, and this programme took a look at comedy programmes which had long since been stuffed away in the BBC vaults and never seen again, or indeed mostly destroyed, except for a couple of episodes. Fascinating fact was that the first ever ‘QI‘ was supposed to be hosted by Michael Palin, with Stephen Fry as one of the team captains. But when Palin dropped out, Fry was asked to take over. Honestly, can anyone imagine ‘QI‘ without Stephen Fry?

I never realised Madness were given a pilot for their own sitcom. Judging by the quality of the clip that was shown, the Nutty Boys did well to stick to making records rather than TV shows. It looked pretty appalling. There was also the pilot of the first episode of ‘Miranda‘. Which was so similar to the actual first episode, I got a bit confused and wondered if that was what I was actually watching. We were also treated to the first appearance of ‘French and Saunders‘ on Friday Night and Saturday Morning, where Jennifer Saunders was ever so slightly plumper than a rather svelte Dawn French.

When they were showing the various American comedians who had BTBC2 shows, I wondered why they never mentioned Kelly Monteith. I used to watch Kelly Monteith every Monday evening and yet no one seems to remember him. Actually, I’m even beginning to wonder if I dreamt up Kelly Monteith (goes off to check Wikipedia…no I didn’t dream him up). Maybe he wasn’t as trendy as Bill Hicks or Dennis Leary, but to my generation, he was one of our first glimpses of US stand-up.

The best bit for me were the clips of comedians when they were young. Harry Hill made a pilot show that was called ‘Fruit Fancies‘, which wasn’t funny (arguable TV Burp was funny because it was partly written by other people). Judging by ‘I Can’t Sing‘’s early closure, he still isn’t funny. We also got shown a wonderful show called ‘Bruiser‘. Honestly, if you can spare a few quid and like comedy, get the DVD off Amazon, just to see TV stalwarts like Mitchell & Webb, Martin Freeman and Olivia Coleman all looking as though they had stepped straight out of university. It’s really funny as well. Especially Martin Freeman and his irritating, fuzzy haired puppet friend called Sherlock….sorry, Sparky.

We also had ‘The Sunday Show‘ from 1995 where a 21-year-old Peter Kay made his first appearance. And he still looked middle-aged! They should make more programmes like this. The BBC must have huge vaults full of early pilots. In fact, they should replace BBC3 with a channel just showing pilot TV shows. I’d be glued to it all day long!

It was the last part of this gripping drama, but like a lot of modern-day dramas, there were too few episodes and the ending was confusing and rushed. Half way through the episode, it became quite obvious who the mysterious Alex Chambers was. But the actual truth behind the murder of Marcus Farrow’s wife and son was a bit of an anti-climax. I won’t give much way in case readers haven’t caught up with it yet. But I can guarantee you’ll be a bit “meh”.

I will however, give myself a pat on the back for predicting that Reinhart would become an ally to Farrow. Despite the mounting evidence against him, a part of her was convinced of his innocence. In all fairness, I don’t think that is down to any stroke of genius on my part. It’s more that I’ve watched so many police dramas, I know how they work and how the characters develop.
The one revelation for me though was Adrian Edmondson. I really did not recognise him as Farrow’s boss. It was only the voice, which occasionally had strains of Eddie Hitler, that gave him away. But his straight-acting was a shock, I have to say.

If you haven’t seen ‘Prey‘, I’d definitely recommend catching up with it on ITV Player. John Simm gave a masterful performance, and I fear it was probably budgetary constraints that made it too short and didn’t give the characters a chance to develop. But I’ve certainly seen worse.

Even so, like a junior Rupert Everett, who had presented ‘Love For Sale‘ on C4 the other week, Tyger was funny and honest – admitting to watching porn and losing his virginity at thirteen (you’ll never watch early episodes of ‘Outnumbered‘ in the same way again after knowing this). He was determined to discover if easy access to pornography is making young people – men especially, have unrealistic expectations when it comes to sex. I had to chuckle the way the youngsters interviewed were going on as though they were the first generation to watch pornography. They’d be shocked to know that back in the dim and distant 1980s, mucky videos were traded in school playgrounds and before that, it had been dirty books stashed under boys’ beds. Admittedly, it is rather shocking that young people can have access to pornography at all times via smartphones, and that it seems they prefer the fantasy of porn rather than real life relationships (even Tyger was left cold having a private dance by an attractive stripper), but surely since the year dot, men have had unrealistic expectations of women. See any painting of a 19th century bawdy house and the prostitutes will be painted in garish make-up with their bosoms heaving – nothing like the women their punters were married to.

I see Tyger is presenting a couple of other documentaries for BBC3 and I think this could be a wise career choice. Friendly and engaging, he was able to get people to open up to him (excuse the pun) and I guess with his background, he got an insight into the human condition a lot earlier than most kids and he should use it to his advantage.

Karen Mason is a London-based writer. She has published fifteen historical fiction novels and is currently working on her sixteenth. She is also an avid movie goer, with a particular preference for gritty British cinema and a weakness for Jason Statham films! Her music tastes stretch from Muse to the Cinematic Orchestra and she loves discovering new acts.
NEWER POSTHBO’s THE NORMAL HEART – A Powerful Heartbreaking Drama
OLDER POSTTHAT WAS THE BOX – May 2014 (Week One)