This week was dominated by the Jess and Ricky break up. Apparently beardy Ricky sent a text message to some girl, and Jess feels betrayed. All sorts of accusations have been levelled, especially from Ricky who claims that he never felt good enough for the Wright family. This is scarily familiar to when Lauren and Mark split up back in the day. I get the feeling you’ll only be accepted into the Wright family if you’ve appeared on the country’s biggest soap opera.

Ironically, when Jess was looking through all the photos of the good old days, Ricky was clean-shaven, so I can’t help but think the hideous beard is somehow cursed (see also any girl who dates tom Pearce).

We also had Elliot and Chloe not getting back together. Chloe is back friends with Lauren, Vaz and Danielle, and even had the wisdom not to indulge in a nightingale poo facial, and I have to admire her resolve where Elliot is concerned. Romantic gestures are all well and good, buying her 33 red roses for her birthday was very nice. But he struggled through his lines when making his speech and when he does tell her he loves her, it consists of ‘I love ya’ is hardly Romeo and Juliet is it? We all remember possessive and jealous Elliot. Well people really change their spots do they and Chloe is wise to see the bigger picture.

Also on ‘TOWIE‘ this week;

Can someone tell Lockie not to wear skinny jeans? He really hasn’t got the figure for it.

Vaz doesn’t believe in Halloween, but will happily dress as Guy Fawkes instead.
Is it weird to enjoy the way Essex men kiss each other’s cheek on greeting?

Tommy and Georgia are now official and we got to meet Georgia’s mum and her nan who is like a younger, Irish version of Nanny Pat.

I can’t help but partly wonder if Old Lady Face Fran does actually fancy Lewis Bloor. She reckons it’s the other way round, but their arguing does spark of sexual tension. Also, Lydia called OLFF ‘aggressive’ behind her back. Wait for OLFF to respond by launching one of her attacks.

Ricky has a watch with no face. 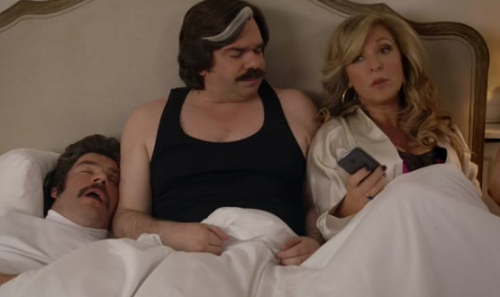 Yay! ‘Toast of London‘ is back and it’s even more bonkers than it was before. Toast is still doing voiceovers (I can hear you Clem Fandango) and Ed, his flatmate appears to be wearing a toupe. Episode one saw Toast recruiting an ageing prostitute to help him win a blow football match against Ray Bloody Purchase and his ‘friendly’ wife Mrs Purchase. I love the sex scenes between Toast and Mrs P. Her constant nonchalance and cigarette smoking while Toast makes funny faces is hilarious. I can’t believe this comedy isn’t bigger than it is. It is one of the funniest things on TV in a long time. It’s just surreal enough to be edgy, but then it will have traditional slapstick to even things out.
I’ve already seen next week’s episode and it’s equally funny. Matt Berry is a comic genius and I will argue with anyone who says opposite. 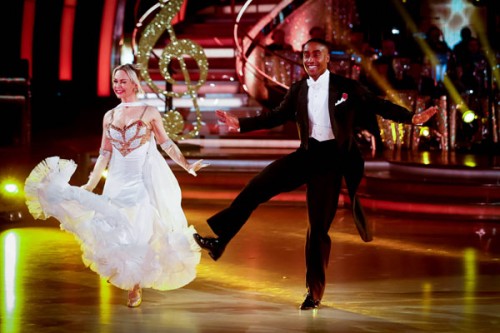 Week seven and Claudia is still off and nursing her little girl (get well soon) and so Zoe Ball stepped in once more and what a good job she does too? Everyone is desperate to get to Blackpool next week. Although I personally don’t like it when they go to Blackpool because the floor is too big and you can’t get a real feel for the dance. But I can see where any dancer would want to go to such a legendary place and feel that bouncing floor.

This week’s show opened with a brilliant quickstep from Simon Webbe. He really is improving and even Len had to be nice to him in his critique. I think Simon could be a dark horse in this competition and I think where the men are concerned it is between him and Mark Wright. Him and Krystina scored 33 and finished second on the leader board and quite rightly so.

I think Caroline Flack was done a disservice this week. For some reason the stylists did not bother to even brush her hair and she was in a rather tatty dress which was open at the back and did not match the elegance and beauty of her waltz. The judges were critical of it as well, and while they danced beautifully, it was not her best dance and felt quite half-hearted. She scored 31 which put her towards the top, but sliding towards the middle.

Someone who has lost their mojo is Jake Wood. He started off so well and looked like a contender, but as the weeks have gone by, he has started to lose the plot a bit. His rhumba was laboured and static and even caused Craig to create a whole new world ‘spatulistic’ (no, I don’t know either). I think Jeanette wanted the rhumba to be romantic instead of sexy, but rhumbas only work when they are sexy. I think in the next few weeks Jake could be in trouble, unless the ‘Eastenders‘ fans get behind him. They ended up with a score of 27 and towards the bottom of the leader board.

Why, why, why is Judy Murray still in? Her paso with Anton was the worst thing I have seen in a long time. The woman is so stiff and awkward, which is weird because she has a bubbly personality off the dancefloor. I’ve nothing more to say other than she finished bottom of the leadboard and quite rightly so.

Another one who could be on shaky ground is Sunetra. She seems a lovely lady and her dancing with Brendan is elegant and beautiful. But she is largely forgettable. Their foxtrot to that annoying John Legend song that I would happily never hear again, was nice but there was nothing memorable about it. They ended up with a score of 31 which puts them midpoint.

Anyone who thought a big girl like Alison couldn’t do a Charleston had to eat their words. She was fast, bouncy and fun, and she and Aliajz swapped the gender roles and she picked him up and not the other way round. Her timing was superb and if she can sing, then I suggest if there’s a revival of Chicago, she’s picked to play Mama Morton!

Mark Wright just goes from strength to strength and I am starting to forget him as that numpty from ‘TOWIE‘. His waltz with Karen was so beautiful that both me and Bruno Tolioni were thinking he could use it as his wedding dance when he marries Michelle Keegan next year. He and Karen have such good chemistry and I would lay bets on Mark being the male winner of this year’s competition.

The trouble with scoring high quite early in the competition is that the judges look for perfection and I think this is what has happened to Frankie. She was so brilliant last week, than when she came back to do her samba this week, they expected the same level of perfection and because she made a couple of minor mistakes they were hard on her. She still scored a respectable 32 but I thought she deserved more.

Pixie is clearly the favourite in the battle of the pop princesses and her weird Foxtrot with Trent which had a 1940s theme and yet was to When I’m Sixty Four by The Beatles (released in 1967), scored the couple’s first 10 of the series, from Darcy. Ken and Barbie seem to be the one the judges want to win this year, and this worked for Abbey Clancy last year so it could work for Pixie. She ended up on top of the leaderboard.

Steve Backshall showed his masculine side this week with a rather brutal paso with Ola. He was all muscles and stomping, which is what paso doble is all about, and while the male judges didn’t really appreciate it, Darcy did, and I was with Darcy. Although what James ‘the Brad Pitt of dancing’ made of Steve grabbing Ola’s boob, I’m not sure. They finished with a score of 28 and are in the danger zone.

So that’s it. Unfortunately I already know who goes home and you are in for a shock – especially when you see who else is in the bottom two.

Karen Mason is a London-based writer. She has published fifteen historical fiction novels and is currently working on her sixteenth. She is also an avid movie goer, with a particular preference for gritty British cinema and a weakness for Jason Statham films! Her music tastes stretch from Muse to the Cinematic Orchestra and she loves discovering new acts.
NEWER POSTLine-up Announced For BAND AID 30!
OLDER POSTWIN: Limited Edition Complete BATMAN TV SERIES BluRay Box Set!