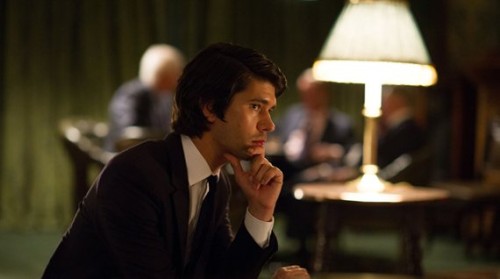 So we’re three weeks into BBC2’s fantastic new espionage drama and we’re still none the wiser. Is Danny a sleeper agent? Is Scottie the enemy? How does Danny afford to live in Vauxhall when he works in a warehouse?

With glimpses of Danny’s seedy, former life, which seemed to largely involve an almost unrecognisable Mark Gatiss, as Rich, a drug dealer/user/general perv who seems to be on the wrong side of the law, but if Vincent in ‘Eastenders‘ can be a police informer, perhaps Rich is an undercover spy.

Was Danny’s meeting with Alex/Alistair somehow engineered, and was he the actual target? Are they framing him for something, and Alex was sent in to bring him down? I know Danny is convinced their relationship was genuine and Alex had told him the truth about being inexperienced, but let me tell you, girlfriend, there are lots of ladies out there having ops so they can feel like that again, so maybe MI6 pays out for a male version to be done!

I don’t know what the answers to any of the above questions are, and I like it that way. All I do know is that ‘London Spy‘ is the most gripping spy thriller I’ve seen since ‘Tinker Tailor Soldier Spy‘ and I can’t wait to see what happens next. 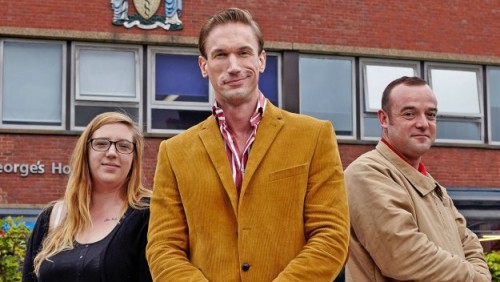 The premise of this programme is that the internet has made us a nation of hypochondriacs, costing the NHS billions of pounds each year because we spend so much time online self-diagnosing. The hilarity in this, for me, is the worst hypochondriac I know has no access to the internet at all (so hopefully she won’t read this!).

Fronted by Dr Christian Jessen – who to me looks like the Lion from Disney’s ‘Beauty and the Beast‘ – he took a group of people suffering from ‘health anxieties’ and tried to cure them. There was Sean, the cocky entertainer who reckoned wasting NHS time and money was his right. It was easy to dislike him until he explained that in a short space of time he had lost both his dad and baby, and it was obvious where his anxiety was coming from. There was Angela who was convinced she had every form of cancer possible (I bet she’s requested a prostate check at some point). She sometimes visits her GP every day, positive she’s dying. There was germophobe Lauren who is obsessed with cross contamination and won’t clean her dishes in the sink, but will do it in the bath, which is in the bathroom, where the toilet is (go figure). Finally there was Stacey whose obsession with having panic attacks had led her to become agoraphobic and therefore not sharing quality time with her partner and son.

I knew Lauren wasn’t going to last course when she moaned about joining Angela and Sean at a GP’s surgery for a day, listening into the sorts of things doctors have to deal with day in-day out, and the thought of going to St George’s Hospital for a day was a complete no no (although anyone living in Wandsworth could understand that!). She left the trial early, but Sean and Angela approached it with aplomb. On attending a St John’s Ambulance first aid course, Sean made it perfectly clear that he watched too many hospital dramas when instructing someone to assist with his dummy who had gone into cardiac arrest, and on going out with paramedics, Angela finally saw there were people out there who were genuinely ill and she enjoyed helping them as it took her mind off her own imaginary problems.

Poor Stacey couldn’t make it out of her house so Dr Christian visited her, and persuaded her to go for a short walk, reassuring her that she didn’t need to stay at home to be near her computer to seek medical advice, as she would have a proper doctor with her. They went for a walk and nothing happened to her, and hopefully she began to see that her problems were all in her head.

What’s reassuring is that by the end, all four patients were moving forward, with Angela even training to become a first responder. I do feel hypochondria is such a complex subject that it required more than an hour-long programme. As we saw from Sean’s confession, more often than not there is a deep, emotional trauma that has led to someone becoming they are ill all the time, and it may well take more than exposure therapy to cure them of their condition in the long run. 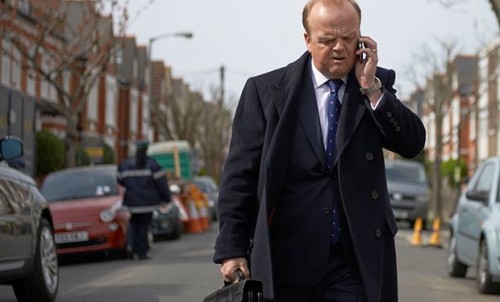 Having not read the book from which this has been adapted, I did not realise it was a satire, and by the BBC trailers, I thought it was a hard-hitting drama, so the inclusion of jaunty music threw me a little. It immediately made it feel light-hearted, like ‘Midsomer Murders‘, set in Tooting. Because I live in a street very similar to Pepys Road, it appealed to me, and indeed the characters are very real to anyone living in London. Especially a newly gentrified part. I live in a neighbourhood full of Roger and Arabella Younts. Men who are detached from reality and only interested in making money and scoring points off their colleagues, and women like Arabella whose lives revolve around the home, the children, controlling the nanny and trying to spend as much money as possible.

Then there was Ahmed the Asian shopkeeper and his family. One brother is sensible and down to earth, the other one fancies himself as some sort of Islamic warrior. Into the mix came their old friend, who seems to like playing rather dubious video games and proclaims football as ‘Kaffir sport’. We also had Quentina the Zimbabwean traffic warden who is actually an illegal immigrant, working under a false name and paying money to a rather dubious man who I assume to be a people trafficker. There were the polish builders who seem to live in the same street as the people whose house they’re working on (I’ve not encountered this) and finally Petunia, the elderly woman who has lived in the street since getting married in the 1960s, and has seen her modest terrace house suddenly become worth over a million pounds.

The action centres around what at first seems a set of harmless postcards reading ‘We Want What You Have’, all the neighbours disregard them, as living in a gentrified part of London, this sort of thing is an everyday occurrence, with property developers desperate to buy up as much as they can. But the campaign swiftly escalates with the postcards including photographs of the neighbours, then a DVD of their movements, and finally, at the end of the show ‘We Want What You Have’ has been written in the middle of the road. Now this could still be part of a very elaborate marketing hoax by an aggressive property developer who is trying to intimidate the people into selling up. Or of course it could be something else entirely. Especially seeing as Petunia’s grandson seems to be very interested in it all.

Once I had got my head round the fact that it’s comedy drama, I grew more interested in it. Anyone who is a fan of exciting thrillers should avoid it, because it’s nearer Agatha Christie than ‘24‘. I suspect at the end, the neighbours will all be gathered together in the corner shop where DI Mill will expose the person who is behind the campaign. Arabella will probably faint, Roger will become indignant and Petunia will reveal herself to be a criminal mastermind. Okay, I might be getting a little bit carried away.

Karen Mason is a London-based writer. She has published fifteen historical fiction novels and is currently working on her sixteenth. She is also an avid movie goer, with a particular preference for gritty British cinema and a weakness for Jason Statham films! Her music tastes stretch from Muse to the Cinematic Orchestra and she loves discovering new acts.
NEWER POSTTHAT WAS THE BOX – December 2015 (Week One) | TV Reviews
OLDER POSTTHAT WAS THE BOX – November 2015 (Week Two) | TV Reviews