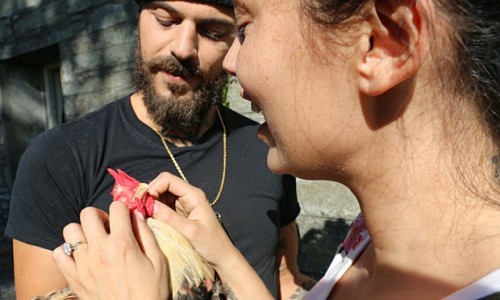 There may be another four months left of 2015, but I think I have found my programme of the year. If there was anyone ever born to be on TV it is ‘Abz Love‘, formerly of 5ive. He’s like a sincere Pete Andre with a strange East London/patois accent. Abz is currently living in a beautiful, modern house in Cardiff with his lovely fiancé Vicky and their five dogs. But their dream is to run a self-sufficient small holding in the country, and this new series will follow them in their quest. They visited the Lammas Project, an eco village in Pembrokeshire, and as Simon, the owner, showed them around, Abz’s wonder at the natural world was something to behold. He thought a perennial cabbage was predatorial, and compared the place to a fish tank, but then changed his mind because his fish died. He is convinced that eco villages will be the thing to fight the zombie apocalypse, and the funniest moment of all was when they decided to buy a chicken to desensitise their dogs to farm animals, and Abz was waxing lyrical about how many eggs they could sell etc, and they bought a male chicken.

Part of the comedy is the facial expressions of the local people as they are greeted with this strange man/child and his weird London accent. But Abz is so loveable and somehow vulnerable, you could tell they were all warming to him. He may talk city, but he is country at heart, and even though he is still performing with 5ive at Butlins up and down the country, his heart isn’t in it, and the scant money he has made since being declared bankrupt is going to go back into his new venture. Vicky is so normal and grounded in comparison and she is clearly devoted to Abz. They are a lovely young couple and you want them to succeed.

Tune in next week for their next adventures. 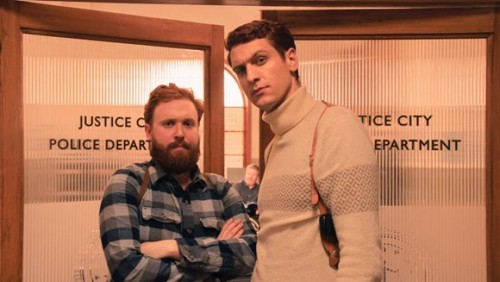 I wanted to like this. I usually love spoof comedies and this parody of all those 1970s buddy cop programmes like ‘Starsky and Hutch‘, The Streets of San Francisco and even ‘The Sweeney‘ should have worked, but for me it just didn’t. It started well, with the coppers – John Mahogany (played by Skeen Raskopoulous – probably the greatest name ever) and Mitch Rust (John Kearns) arresting a drug selling ice cream man played by Christopher from ‘Phoneshop‘, and his crazed ice cream seller/drug dealer dad played by Paul Ritter, and probably the best thing about it, swore revenge. Meanwhile, Mahogany fell in love with Pippa the new psych and Mitch became jealous and wanted to sabotage their relationship. But it turned out she was a wrong’un anyway.

Sounds funny on paper, except it wasn’t particularly. The programme didn’t seem to know where it was going. A far funnier play on this genre are Cardinal Burns’ Turkish taxi drivers, Hashtag and Bukake. The sketches stick to the maverick cops/angry boss who gives them too many chances, formula, but the premises are so lame that is where the comedy comes from. A girl moving out of her student digs, or a pretty girl being taken to Dalston after the taxi drivers have a punch up with her boyfriend, makes a mockery out of the original programmes and makes you laugh. But with ‘Top Coppers‘, not only did we have the two heroes trying to solve the case, there were also surreal touches, like Rust’s fixation with ‘Speed‘ (the film) and the inclusion of a puppet hamster, which reminded me of ‘The Young Ones‘. A spoof is a spoof, it doesn’t need to be surreal as well.

I fear it may fall a bit flat, given that the audience who will remember the heyday of dramas like ‘Starsky & Hutch‘ etc, will also be able to remember ‘The Young Ones‘ and how much funnier it was than ‘Top Coppers‘. Younger people won’t get the irony or comparison and so it’ll just seem stupid. This might have worked as part of a sketch show, maybe an ongoing thing. But as a half hour show, on for six or so weeks, I just don’t think it’s going to work. 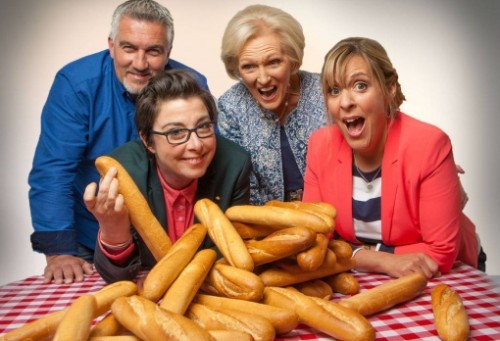 It was Bread week for our bakers, and the first challenge was one that hadn’t been done before – a quick bread made without yeast (so basically, soda bread). Naturally the bakers had to go one better than just making soda bread, and some of their inventions were strictly mind-boggling. Mat made a Mexican soda bread with jalapeño peppers. It sounds revolting and apparently he kneaded it too much and it basically just turned into spicy bread. Nadiya also went down the Mexican route and hers ended up more like a ciabatta.

On paper, Sandy putting bacon and onion in, shouldn’t have worked, as I’d have thought it would have become too fatty, but according to the judges it was lovely. Sandy still annoys me though. She mugs the TV screen too much and isn’t as funny as she thinks she is.

Some of the more yummier combinations were Flora’s fig and hazelnut bread made with rye flour, Dorrett’s walnut, sultana and blue cheese bread, which sounds delicious but wasn’t apparently intense enough (I do feel the judges – especially Paul have had it in for poor Dorrett a bit from the beginning). Tamal’s fig and goats cheese bread sounded heavenly and apparently it tasted it too.

Naturally Ian had to show off, bringing wild garlic from home and making a pesto and garlic bread that I admit sounded and looked lovely. The judges like it too. Alvin made a bread using cheese and basil, and topping it with various things. It ended up looking like a pizza, but it was Mary and Paul’s favourite. Miserable Paul went down the fairly safe cranberry and orange route, and it sounds like it should have tasted more like a cake, but apparently it was lovely.

My personal favourite was Ugne’s chocolate bread with salted caramel sauce. She used both baking soda and bi carb and Mary could smell the baking soda, which didn’t bode well, but it seems it was delicious, and I was jealous that they got to eat it and I couldn’t have a taste!

The Technical Challenge was to make four identical French baguettes, which sounds easy enough, but I didn’t realize it involves putting water into the oven to make it go steamy to give the bread a crust, and making sure you cut perfect diagonal slits in the top of the bread to let the air out etc. Some of them, such as Ian’s, turned out well, awarding him winner. Others, like Nadiya’s and Paul’s just ended up looking like ciabatta. Which tells me that ciabatta must have originally come about because someone somewhere in Italy decided to make some sort of loaf and it turned out wrong!

The showstopper was to create a 3D sculpture out of different types of bread and I was surprised there were no major disasters. Tamal made a bicycle which was beautiful and didn’t fall over! Alvin didn’t quite get his head round the brief and instead of creating a sculpture, he made an American-style cornucopia, which is a bread filled with other breads, which apparently tasted nice but wasn’t what the judges were looking for. Using spices again, Mat made the Brighton Pavilion with bread filled with curry. It sounded revolting and just about passed muster largely due to how good it looked.

My own personal favourite was Nadiya’s snake charmer basket. The snake was wonderful and she made the basket perfectly and it didn’t fall apart. It would have been perfect for a child’s party. I thought that Flora’s skirt and corset, whilst very well structured, looked a bit strange and without being told, I wouldn’t have known what it was. As with Sandy’s basket of flowers, inspired by the poppies at the Tower of London. The poppies just looked messy and horrible, and paled into comparison to Ian’s beautiful flower pot with flowers sticking out of it.

Ugne made an Easter basket with bacon and truffles and things, and it sounded quite sickening, and apparently the truffle oil ruined it. Miserable Paul made a wonderful lion, using different breads and almonds for claws and it was fantastic. As a proud Leo I would happily have it tattooed on my shoulder, except my cancer moon makes me a wimp to pain and I can’t even look at needles and blood. Paul was awarded a special commendation by the judges for such a fantastic creation, and if he’d done better in the other challenges he would have won star baker, but instead that was once again given to Ian. Poor old Dorrett was sent home because her unmade bed, inspired by the Tracey Emin sculpture was just a mess. To me, compared to Sandy’s, it was a work of art, but there you go.

Karen Mason is a London-based writer. She has published fifteen historical fiction novels and is currently working on her sixteenth. She is also an avid movie goer, with a particular preference for gritty British cinema and a weakness for Jason Statham films! Her music tastes stretch from Muse to the Cinematic Orchestra and she loves discovering new acts.
NEWER POSTTHAT WAS THE BOX – August 2015 (Week Four) | TV Reviews
OLDER POSTTHAT WAS THE BOX – August 2015 (Week Two) | TV Reviews