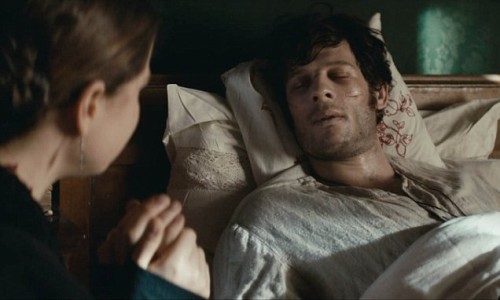 
And so we reached the last episode of the grand soap opera. The French are occupying Moscow, the Rostovs have lost everything and are having to flee, and Pierre has gone a little bit bat shit and is convinced he has to kill Napoleon. His house has a squatter in the form of a hunky French officer, who he dines with (more of that later), and his floozy wife Helene is still trying to get the marriage annulled so she can marry the father of her unborn child.

The episode had quite a lot of death in it. Poor old Ilya kicked the bucket after his son Peyta was killed in battle. En route to their retreat, the Rostovs picked up Prince Andrei, whose death went on longer than Charlie Slater’s. But at least he told Natasha that he forgave her for her dalliance with Anatole (who is also dead after having his leg chopped off). With Pierre in prison, Helene is unable to obtain her annulment and shunned by polite society for turning up to a party pregnant and wearing a see-through nighty, she overdoses on the bottle of abortion potion she has acquired, and dies alone and covered in blood.

I have no idea why the French had ‘Allo Allo’ accents and yet the Russian peasants sounded as though they came from Leeds. Not all the Frenchies were bad though, the hunky officer who was squatting in Pierre’s gaff saved him from the firing squad, allowing him to go with the other prisoners. He made friends with a man who had a dog and gave him a potato to eat, making sure he put salt on it to flavour it. I bet Joey Essex got all excited at that part (if he was watching and could understand it) it was a proper salty potato.

It all ended quite happily with Marya and Nikolai falling in love and marrying, and Pierre, now clean and tidy and keen on eating chips with salt on, declared his love for Natasha and they too married. At the end we had a little scene of the two families with all their photogenic children, enjoying a picnic. Little did they know that in a hundred years time, aristos such as them would come a cropper when the Bolsheviks took things over, but let’s not spoil their little world for now.


It’s the second regional heat and our northern competitors are sent to a hotel distinctly less glam than the one their London counterparts got to enjoy. The procedure was exactly the same. There was a mystery bag and they had to pull out a random object and ‘sell’ it to the judges. Jake from Carphone Warehouse sold a rubber chicken quite well, but Ryan from Fonehouse insulted judge Christian when he sold a hairbrush by saying it was only suitable for two of the judges – oops. Ryan works for Fonehouse, the small, independent retailer, in Belfast. He is a former pop star whose life of rock and roll excess drove him to the edge and only his love for his wife and kids pulled him from the abyss of drink and drugs.

EE’s Johnny Brown didn’t get through the first time because he failed his mystery shopper round, but he got through on a wildcard and went in all guns blazing, and even Sunetra found him aggressive (and that’s saying something). Even his boss said he should smile more. He obviously achieves his targets by intimidating people!

I loved Callum from Fonehouse Weston Super Mare, his Brent-isms were something to behold. The best one for me was that winning the award would be the icing on the cake, then he had to stress the point by letting us know that the shop is the cake and the award would be the icing. Thanks for that David…er Callum. He largely sells phones to elderly people, and whilst this must be quite difficult, it can hardly be compared to someone working in an inner city store, dealing with people of all ages and ethnicities and making sure you get your point across in a clear enough way you still make a sale.

Poor Andy from Sunderland’s Fonehouse received some sad news when he discovered his nanna had passed away. He kept it to himself, not wanting the sympathy votes, although the judges could clearly tell there was something up. He wants to thank his lucky stars that he’s not on the ‘X Factor‘ – Simon Cowell would have got the thumb screws out to find out what had happened!

A more light-hearted moment was when Claire from Carphone Warehouse declared that she actively listens, then when asked what the judges names were, she couldn’t remember!

But despite this, she still got through, as did Ryan, Andy and Mr Perfect Nick. Alas Johnny and Callum weren’t so lucky. Maybe they both need to learn a bit of humility to make them more likeable.

It’s the grand final next week. What am I going to do when the show finishes?

After his successful documentary about male suicide, Professor Green has now turned his attention to the thousands of young people who are currently without a permanent home. The Professor is a man of many facets – rapper, husband of ‘Made in Chelsea‘ woman, co-host of ‘Lip Sync Battle‘ which is possibly the most pointless programme on television, but strangely entertaining at the same time. He is now on his way to becoming the Ross Kemp of the hip-hop world and presenting hard-hitting documentaries.

He travelled to Manchester where he met Luke, a 20-year-old homeless guy who I seriously wanted to reach through the TV and shake. Having fallen in with a bad crowd in his teens, he left home and has slept rough ever since – too scared to return home and put his mum in danger. Very admirable, but I’m sure his mum would like to see him making the most of the opportunities that have been given to him. He’s given a place in a hostel which at first he loves, but when the craving for Spice – a nasty legal high that’s supposed to mimic cannabis but is more like heroin – kicks in, his personality changes and he becomes ungrateful and aggressive. You can sense Steven (The Professor) also wants to shake some sense into him. Spice is currently the scourge of Manchester’s homeless population. At a fiver a bag, it offers oblivion for a short while, but at the same time it’s addictive and dangerous.

While Luke is a victim of himself, people like Zukina, Lauren and Jerome are more victims of the system. Both women are single mothers, Zukina’s daughter is living with her father because of Zukina’s homelessness and Lauren, after being made evicted is living with her small daughter in a friend’s spare room. It’s better than the streets, and I guess we don’t know the full reason why they were evicted, but these days, even rent arrears can be the result of the government’s benefits cuts. Jerome left the care system, and even though he has a full-time job in a bookies, he can’t afford the huge London rental prices and is instead sleeping on his aunt’s sofa. To look at Jerome – well dressed and articulate, it’s hard to fathom that he is without a home, but this is a growing reality, especially in the south of England, where rent is so high, most people can’t afford it, and social housing is being cut.

Back in Manchester, Luke’s friend has been horribly murdered and to pay tribute, Luke decides to spend two nights a week camping at the spot where his friend was beaten and then set on fire. He reckons this nasty event will be the thing to change his ways, but I’m not too sure. I think the lure of drugs will be enough to make him stay on the streets, but I hope I’m wrong.

Karen Mason is a London-based writer. She has published fifteen historical fiction novels and is currently working on her sixteenth. She is also an avid movie goer, with a particular preference for gritty British cinema and a weakness for Jason Statham films! Her music tastes stretch from Muse to the Cinematic Orchestra and she loves discovering new acts.
NEWER POSTThe Top 10 Unmissable Films In 2016
OLDER POSTSPOTLIGHT (2016) | FILM REVIEW