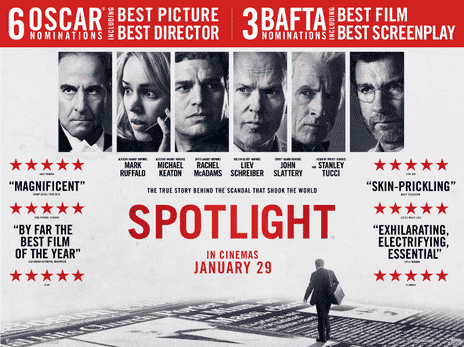 ‘Spotlight‘, one of the most engrossing dramas to be released recently, tells the true story of the Boston Globe’s Spotlight team, a group of journalists who in 2001 uncovered the Catholic sex abuse scandal in Boston. Director, Tom McCarthy, one of the writers of PIXAR’s incredibly touching ‘Up‘, has assembled a brilliant ensemble cast. Michael Keaton, whose career seems to have revitalised after last year’s Oscar-nominated ‘Birdman‘, plays Walter Robinson, the head of the Spotlight team. The other members include Mark Ruffalo, Rachel McAdams and Brian d’Arcy, all of whom give charismatic performances.

The film begins with the Boston Globe hiring a new editor, Marty Baron, played with captivating understatement by Liev Schreiber. When Marty reads that a well-known cardinal knew a priest was sexually abusing children and did nothing to intervene, he urges the Spotlight team to delve into similar claims. As the film progresses, we are shown just how far the scandal goes, from the citizens of Boston remaining silent about the child molestation going on in their own homes and churches, to the cardinals bribing and charming the papers to keep quiet. The group involvement in the cover up is succinctly illustrated by Phil Saviano. A victim himself, he says, “If it takes a village to raise a child, it takes a village to abuse them”. This increasingly seems to be the case. As the team learn more about these incidents, so do we, and we find that it’s a scandal spanning decades. Everyone seems complicit, from the churchgoers keeping quiet, right up to the Pope himself. 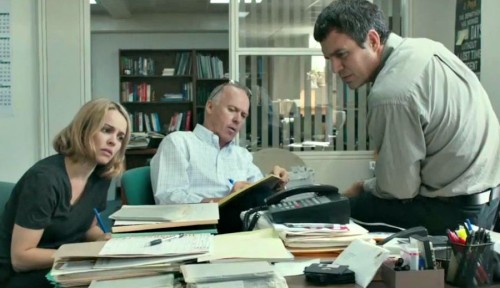 Mark Ruffalo gives an especially intriguing performance as Michael Rezendes, the investigative reporter who never stands still, and may well win the Oscar for best supporting actor at the end of the month. Also worth mentioning is the immensely watchable Stanley Tucci, expertly portraying Mitchell Garabedian, a likeable Armenian lawyer who assists Ruffalo in his quest to uncover the truth.

Ultimately, this film’s greatest strength is how it keeps its audience gripped while containing very little action. As much of the film is concerned with the groundwork of journalism, we see McAdams and Ruffalo interviewing victims of sexual assault by the priests. These emotional testimonies are chilling, but one of the most unsettling scenes is when McAdams speaks to an elderly priest on his doorstep, and he calmly admits he had molested young boys. Though there is no incredible spectacle or grand speeches, ‘Spotlight‘ is fascinating nonetheless. Watching it, you feel as if you’re right there in the Spotlight office as the team rummage through endless piles of files and documents to discover just how far the widespread and insidious scandal reaches. 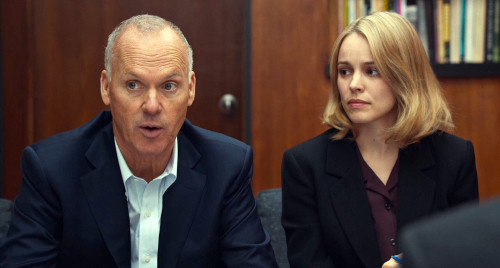 This is a film that should be praised for reminding us that even our most revered institutions should be held up to scrutiny, and that scepticism should be heartily encouraged, as well as being a love letter to good old-fashioned journalism in an age without the internet as we now know it. ‘Spotlight‘ is an intriguing real-life story about seeking out the truth, no matter the cost, and a shining example of how good journalism is done. Definitely worth watching.