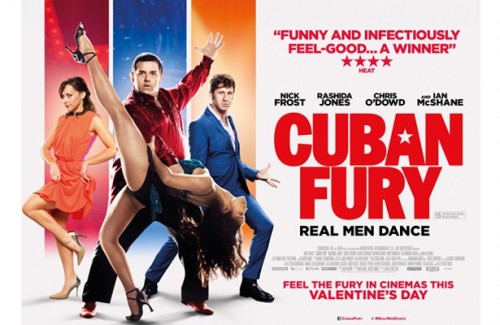 ‘CUBAN FURY‘ is what I would call a “small British film”. With a cast of people you mainly see on the TV and cheap-looking locations, this is never going to be a blockbuster!

Nick Frost stars as Bruce Garrett, a former child Latin dance champion who gave it all up when he was attacked on his way to a competition. 25 years on he’s over-weight, out of condition and letting life pass him by, working for an engineering company. When he discovers his hot new American boss, Julia (Rashida Jones) is also a salsa dancer, he decides to get back in the saddle and start dancing again. However, his attempts are thwarted by villain of the piece, his colleague Drew, played by Chris O’Dowd.

Arguably, the funniest performances are from O’Dowd and the wonderful Kayvan Novak who plays Bruce‘s camp dance buddy Bejan. While Drew does all he can to put Bruce down, by making disgusting remarks about his intentions towards Julia, Bejan helps Bruce discover his inner dancer once more.

What’s right with it

It’s funny, warm-hearted and has a great supporting cast – Olivia Colman, Rory Kinnear, Ian McShane to name but a few. The dance off in the car park between Bruce and Drew is inspired and it’s quite difficult not to be distracted by O’Dowd‘s snake hips! Nick Frost is like a loveable teddy bear who’s impossible to feel ill-will to and you’re rooting for him right from the beginning. 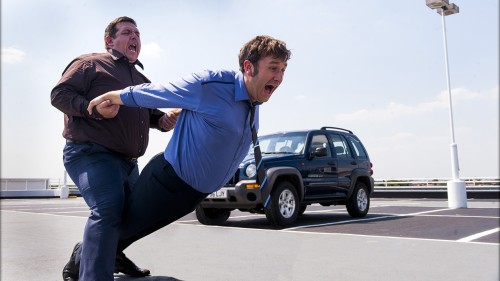 What’s wrong with it

It’s predictable and cliché ridden. It’s what I consider to from the “Jane Austen template” – heroine gets wooed by cad while the right man – who might not be perfect but is honourable – is right under her nose all along. If you couldn’t guess the ending then you must have never watched a movie or seen a film before.

A feel-good, funny British film with no bells and whistles but great music (although you might find yourself fancying Mexican food afterwards like I did). A good date movie or one to see with your friends. And look out for the blink-and-you’ll-miss-it cameo from Frost‘s best buddy Simon Pegg.

‘CUBAN FURY‘ is out now in cinemas across the UK!

Karen Mason is a London-based writer. She has published fifteen historical fiction novels and is currently working on her sixteenth. She is also an avid movie goer, with a particular preference for gritty British cinema and a weakness for Jason Statham films! Her music tastes stretch from Muse to the Cinematic Orchestra and she loves discovering new acts.
NEWER POSTTHAT WAS THE BOX – February 2014 (Week Two)
OLDER POSTTHAT WAS THE BOX – February 2014 (Week One)