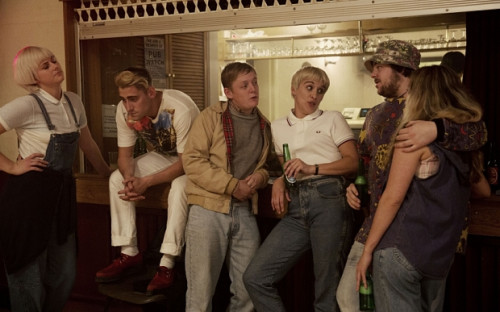 This to me should have been called ‘How to Make Someone who still feels relatively young, feel really old’. 1990, to me, feels like recent history, but watching ‘This is England 90‘ and being reminded of the god awful fashion and how everyone my age wanted to get into a rave, and like young Shaun I didn’t know what I wanted to do with my life, I realised that it was a quarter of a decade ago, and I now know quite a few people who weren’t even born then.

Shane Meadow’s ‘This is England‘ drama reminds me a bit of ‘TOWIE‘ (no, bear with me). It’s about a bunch of friends who have known each other all their lives, and in one episode, nothing particularly interesting happens, but it keeps you riveted. Take this week, the first of four episodes based in each of the seasons. It was Spring, and Lol is now working as a dinner lady in a school, and her friends Gadget and Milky tried to get some free scran off her.

Lol and Woody are now living in domestic bliss, with Woody bringing up the kids and trying to avoid his parents’ rather hilarious attempts to get him back on the straight and narrow. The scene where he visited them and the family friend fell out of the cupboard, with a proposal for Woody to join his company, was downright bizarre.

Shaun is pining after Smell, who is now a Goth and dating a boy who looks scarily like my first boyfriend. Shaun decked him after he came to tell him Smell wouldn’t be attending the Madchester night. I’m not sure Madchester nights were an actual thing back in 1990. They would have just been a club night. Surely Madchester would be a nostalgic tag for nights organised for sad forty-somethings who used to go to college wearing dungarees and an orange and brown Aztec print hoodie….(moving on).

I have to be honest and admit that I found it all a bit self- aware. The dialogue appears to be improvised, but the style of acting was quite stagy in parts. Not because they’re bad actors, but more that they know they’re in something special and they’re going to milk it for all its worth. I have to say though, the comedy of Flip and his friend Higgy, dressed like George Michael and engaging in the most passionless threesome since Rod, Jane and Freddy, was comedy gold. I fear as usual though with ‘This is England‘, we are being lulled into a false sense of security. Lol, Woody, Milky etc are slipping into maturity, even down to not being familiar with the bands of the day, and Shaun has become a young man , but you just know some big curve bomb is going to be thrown into the mix, ruining their idyll. I can guess what it is, but I dare not say. I don’t want to spoil it for anyone. 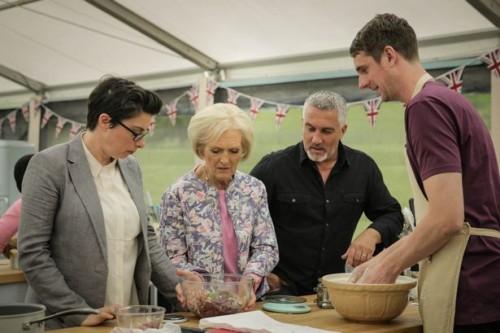 This series seems to be flying by, and we have only six contestants left, and next week it’s the quarter finals! For some reason, they chose to have the contestants make Victorian dishes this week, and as a veggie, the first one – Game Pie, made me a bit nauseous. Once again, their pastry making skills were tested, and added to this, they had to cook with meat as well.

Miserable Paul made a ‘not boring’ game pie, with venison, pigeon, pheasant, eye of newt or something of the other. Anyhow, it didn’t turn out very well, and Paul Hollywood didn’t like it. Mat bought in a family heirloom – a genuine 1850 tin pie dish, for his creation, but it didn’t stop him producing something rather mediocre.

Tamal and Nadiya both went down the spicy route for their pies, and whilst Tamal put just the right amount of spices in – so good Paul shook his hand. Nadiya flooded hers with spices that simply would not have been around 150 years ago and spoilt the whole thing. I understand that bakers like to bring a touch of their own culture into their cooking, but I do think sometimes they need to just follow the brief. Unless you’re told to put a modern twist on a dish, just cook it how it’s supposed to be cooked!

Flora winged her pie, after not cooking it properly and having to whack the oven up high at the end, to get the meat to the right temperature. To me, the pastry looked rather burnt, but Mary was impressed and she’s the one being paid to judge. Not me. Smug (and rather strange) Ian was inspired by road-kill and there was even guinea fowl in his pie, and I did lay awake last night wondering if it was the same poor guinea fowl whose eggs he used last week.

Technical challenge was to make a Tennis Cake (if this was ‘Harry Hill’s TV Burp‘ I’d look to camera and shake my head), and as well as making a fruit cake, the contestants had to make sugar paste and marzipan from scratch, to top the cake with an edible tennis court, rackets and net. I discovered that overheated gelatine looks like phlegm and also that Mrs Beeton, didn’t know how to cook. So there you go Lord Reith, television can be educational.

Paul made me laugh when he described Mat’s creation as ‘the tennis court from Hades’. Well, for some reason, he baked his icing, and it did look like it had come out of a war zone. But he still didn’t finish sixth, that honour went to Miserable Paul. Nadiya took first place because she was the only person who had a net that was standing up.

The Show-stopper challenge was to make a Charlotte Russe (looks to camera again), a Victorian dessert with sponge and bavarois and jelly. Apparently bavarois is like custard and cream mixed together (sounds like a trifle) and I just felt sorry for all those Victoria cooks who had the dreadful task of making things like this on a daily basis, so their employers could show off.

Of course Ian had to show off, including his home-grown lemon verbena, and putting Queen Victoria’s crown on top! Miserable Paul spent so long putting fruit carvings round the edge of his Charlotte Russe, he forgot a little thing like making sure the jelly set properly, and so it ran like a red wobbly river down his bavarois (oo er).

Matt had a disaster, trying to bake his ladies fingers all in one go, stuck together, and they ended up splitting and looking a mess, and Flora annoyed Paul by adding pomegranate to her jelly. Mary liked it, but Paul was quite vehement about the poor pomegranate – it’s not that offensive.

Tamal took a big chance in making a jelly base instead of a sponge one, but it worked, and his Charlotte Russe was the only one – to me – that looked edible. Nadiya put Italian meringue in hers, but then went and ruined it by making her sponge fingers too flat. Quite rightly so, Tamal was awarded Star Baker, and poor old Mat – after a disastrous week – went home. I predict Miserable Paul will be the next to go and the semi finalists will be Tamal, Nadiya, Ian and Flora.

Karen Mason is a London-based writer. She has published fifteen historical fiction novels and is currently working on her sixteenth. She is also an avid movie goer, with a particular preference for gritty British cinema and a weakness for Jason Statham films! Her music tastes stretch from Muse to the Cinematic Orchestra and she loves discovering new acts.
NEWER POSTTHAT WAS THE BOX – September 2015 (Week Four) | TV Reviews
OLDER POSTTHAT WAS THE BOX – September 2015 (Week Two) | TV Reviews