ALFRED MOLINA: “We Were Told Not To Talk About SPIDER-MAN”

Alfred Molina has spoken about his return to the Spider-Man multiverse, but he was told not to talk about it. 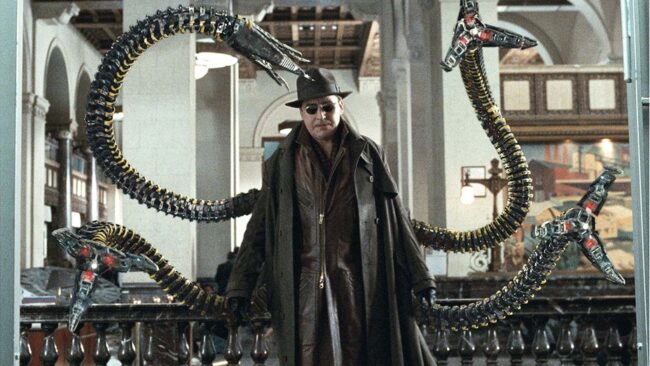 Alfred Molina is due to reprise his role as the villainous Otto Octavius in the new ‘Spider-Man: No Way Home‘ movie, led by Tom Holland. However he was told to keep it quiet, according to Variety.

In an interview with Variety Molina, to talk about his role in ‘Promising Young Woman‘, he said:

“When we were shooting it, we were all under orders not to talk about it, because it was supposed to be some great big secret.

“But, you know, it’s all over the internet. I actually described myself as the worst kept secret in Hollywood!”

Not only did he confirm his involvement as Doc Ock, Molina was excited to return to a role he first played in Sam Raimi’s ‘Spider-Man 2‘ in 2004.

“It was wonderful. It was very interesting going back after 17 years to play the same role, given that in the intervening years, I now have two chins, a wattle, crow’s feet and a slightly a slightly dodgy lower back.”

For those who watched ‘Spider-Man 2‘, you might remember that Doc Ock died. So how will he be brought back?

“I died”, Molina said. But Jon Watts (director of ‘No Way Home‘) told him, “In this universe, no one really dies.”

The movie will pick up Doc Ock’s story from “that moment” in the river.

With all this being said, neither Sony Pictures nor Marvel Studios has confirmed Molina’s return.

‘No Way Home‘ is currently scheduled for release on the 17 December, 2021, so we may get to find out more in the trailers, in the run-up to the release.

Ed is an entertainment news writer, and founder of TOMORROW'S NEWS. He always keeps a watchful eye on who and what's trending in the entertainment world. His articles focus on tomorrow's news today, including celebrity news, film news, music news and so much more!
NEWER POSTSARAH JESSICA PARKER Can’t Confirm CORBETT’S Casting In SATC Reboot
OLDER POSTEUROVISION 2021: Join In The #SWINGALONG