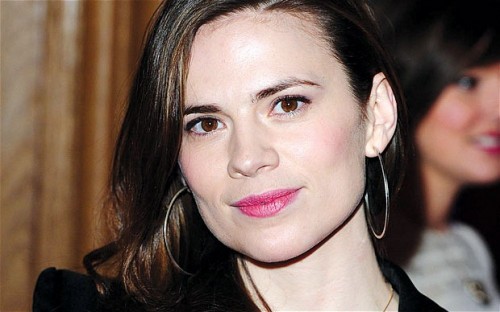 British actress Hayley Atwell has told TIMEOUT magazine that she will not be returning ‘Captain America: The Winter Soldier‘, despite various rumours previously suggesting otherwise.

The magazine confirmed that she wouldn’t be reprising her role as Peggy Carter, as they state:

“She won’t, she confirms, be back for the latter’s sequel, which moves the action into the present day.”

Now attention has turned to who will play the female lead, whether it’s Peggy Carter or someone else. Many internet sites are reporting that her niece Sharon Carter will make an appearance, with the likes of  Jessica Brown Findlay (‘Downton Abbey‘), Emilia Clarke (‘Game of Thrones‘), Teresa Palmer (‘I Am Number Four’), Imogen Poots (‘Fright Night‘) and Alison Brie (‘The Five-Year Engagement‘) in the frame to nab the role. I must stress, nothing has been confirmed yet!

What we do know is that Chris Evans will return to reprise his role Steve Rogers/Captain America, with franchise newcomers Anthony Mackie in the role of the Falcon and Frank Grillo as Crossbones. Fellow Avenger team members Fury (Samuel L. Jackson), Black Widow (Scarlett Johansson) and Maria Hill (Cobie Smulders). Sebastian Stan also will be returning as Bucky Barnes.

Anthony and Joe Russo will helm ‘Captain America: The Winter Soldier‘, which is set to hit cinemas on the 4th April, 2014!

Ed is an entertainment news writer, and founder of TOMORROW'S NEWS. He always keeps a watchful eye on who and what's trending in the entertainment world. His articles focus on tomorrow's news today, including celebrity news, film news, music news and so much more!
NEWER POSTWIN: LES MISERABLES (2013) Movie Soundtrack!
OLDER POSTRUSSELL CROWE Responds To LES MISERABLES Critics!