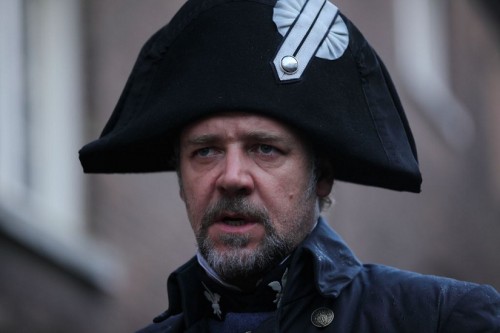 ‘LES MISÉRABLES‘ has been praised for various performances on screen, and there’s even early talk of OSCAR glory for Anne Hathaway. But spare a thought for Russell Crowe, who has taken some heavy hits for his singing performance in the movie!

The press have been less than complimentary (as usual), as a San Francisco critic remarked that Crowe “can’t sing to save his life. An Australian writer commented in the New York Times:

“Hugh Jackman should have shot him at the barricade when he had a chance. But Britain’s Guardian film critic complimented him on his low-key bleating in contrast to the coshing [bludgeoning] professionalism of the other stars.”

Crowe, who has been extremely vocal to criticism in the past, has been conspicuously silent in light of the recent feedback. Oddly, it was the criticism directed at him by former American Idol winner Adam Lambert which prompted the ‘Gladiator‘ star to respond.

Taking to Twitter, Lambert said over the weekend in a series of posts:

“It’s an opera. Hollywoods movie musicals treat the singing as the last priority. (Dreamgirls was good).”

“The industry will say ‘these actors were so brave to attempt singing this score live’ but why not cast actors who could actually sound good?”, and he suggested that director Tom Hooper “should have studio recorded and sweetened the vocals”

Recognising some of the performances in the movie, Crowe clearly did not disagree. When asked by a fan to comment on Lambert‘s remarks. Crowe reportedly tweeted:

“I don’t disagree with Adam. Sure it could have been sweetened. [Director Tom] Hooper wanted it raw and real. That’s how it is.”

“Sorry for being so harsh but it’s so True! I’m so glad we are all discussing this now! Look — I grew up w this musicaland so my expectations are quite high. Didn’t mean to b negative.”

Whatever you may think, the movie looks great and I will be giving away a couple of copies of the soundtrack in a competition very soon!

Ed is an entertainment news writer, and founder of TOMORROW'S NEWS. He always keeps a watchful eye on who and what's trending in the entertainment world. His articles focus on tomorrow's news today, including celebrity news, film news, music news and so much more!
NEWER POSTHAYLEY ATWELL Not Returning For CAPTAIN AMERICA Sequel?
OLDER POSTBOBBY WOMACK Struggles To Recall Songs Due To Alzheimers!