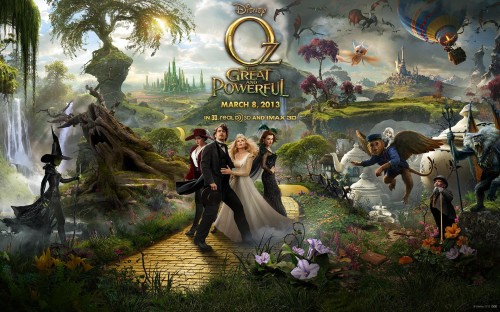 If you’re a massive fan of the 1939 MGM classic ‘The Wizard of OZ‘, make sure you leave your ruby slippers at the door because Sam Raimi‘s vision airs on the side of L. Frank Baum‘s original story, set before Dorothy Gale skipped along with her OZ chums along the Yellow Brick Road! But it seems that Oscar Diggs (a.k.a. OZ – played by James Franco) gets more than what he bargains for when the struggling magician/entertainer arrives in a strange but wonderfully colourful land.

Raimi‘s ‘OZ The Great And Powerful‘ begins with a shallow, failing stage entertainer, Oscar, who appears to have no or little respect for those around him, especially his long-time show companion and friend Frank (Braff). But Oscar soon finds himself in more trouble than ever and flees the circus in a hot air balloon, and as it’s set in Kansas, what better way to get to the land of OZ but via a nasty tornado.

As per the ‘Wizard of OZ‘, the screen expands from a 4:3 an impressive widescreen view, to show the lush colourful sweeping landscape of OZ. He first meets Theodora (Kunis) and she soon believes he’s the one to save them all and bring peace to the people – the new King of the realm. As the compulsive liar that he is, Oscar fails to correct her assumption and she excitedly brings him to the Emerald City, also to meet her sister, Evanora (Weisz). Unlike Theodora, her sister is somewhat cautious of the new arrival, and sees right through his lies. So in order to prove his worth, Evanora sets him a challenge to kill the evil witch Glinda (Williams) – and he must, if he is the true Wizard of Oz. 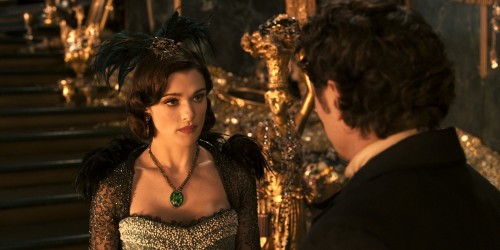 All is not what is seems in OZ, so will he choose all the gold and riches in the world and kill the evil witch? Which witch is evil?

Raimi manages to capture the look and feel of all the familiar favourites – including the Yellow Brick Road, the Emerald City, whilst delicately respecting the classic original movie. The detail in the landscape was superb, with the majestic mountains, waterfalls which seem to flow forever, and deep dark forests which even the brave would not dare venture into. The Emerald City was just regal as the 1939 classic, particularly the interior of the castle and main throne room.

Weisz and Kunis were perfectly cast as sisters who each had their own plans for the Wizard of OZ, although I could not help but think that maybe their characters would have been better if the actresses had switched roles? Something to ponder when you watch the movie for yourself.

The big question remains – would Robert Downey Jr or Johnny Depp been better in the role of Oscar? Franco had his comedic moments, but it was the cheeky smile and glint in his eye that made him a good casting choice. Was he memorable? Not as much as I would have liked. 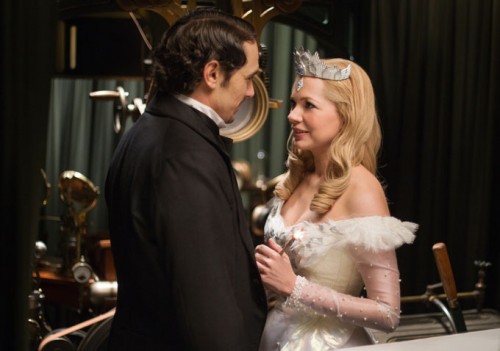 The incredibly versatile Williams played a fantastic Glinda, even flawlessly appearing to hold her composure when faced with the decision of wreaking revenge on the person who took away her father. A flattering compliment to Billie Burke‘s Glinda from the ‘The Wizard of OZ‘.

Braff appeared much more entertaining as Oscar‘s side-kick Finley than he did as Frank, but given the screen time of the two characters, this is not a complete revelation.

You might be disappointed if you’re after a sing-along modern classic. However if you’re looking to introduce a movie version of Baum‘s stories to your children, you could do a lot worse than starting with ‘OZ The Great And Powerful‘. Then you can dig out your copy of ‘The Wizard of OZ‘, and sit down with your loved ones to watch how the story continues.

‘OZ THE GREAT AND POWERFUL‘ is general release from the 8th March, 2013.

Ed is an entertainment news writer, and founder of TOMORROW'S NEWS. He always keeps a watchful eye on who and what's trending in the entertainment world. His articles focus on tomorrow's news today, including celebrity news, film news, music news and so much more!
NEWER POSTSAM MENDES Not Returning For BOND 24!
OLDER POSTWIN: BEN AFFLECK’s ‘ARGO’ on DVD!