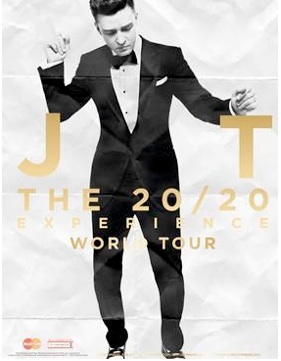 Following the critically-acclaimed release of Justin Timberlake‘s latest album The 20/20 Experience, GRAMMY® and EMMY® Award-winning star will be taking to the stage in arenas around the world, in his first headlining tour in six years – covering cities throughout North America, Europe, Australia and South America.

Timberlake will bring his electrifying live shows to the newly announced UK/European tour, which will include stops in London, Paris, Zurich, and Berlin and more. The musician will kick off his captivating worldwide tour this year on October 31st in Montreal, QC Canada.

Tickets for the UK/European leg of The 20/20 Experience World Tour will go on sale from Friday, 4th October 2013 (see listings below). Timberlake’s all-new fan club, The Tennessee Kids (#TNKids), will have access to a pre-sale starting on 1st October, 2013. Fans should visit http://thetennesseekids.justintimberlake.com to register for the fan club and receive a special code to access the pre-sale. A pre-sale for MasterCard cardholders will also begin on 1st October, 2013.

A full list of cities, venues and public on-sale dates can be found below. For the latest information regarding pre-sale and on-sale dates, please visit www.justintimberlake.com. Hashtag: #JT2020TOUR

The 20/20 Experience is this year’s (2013) best-selling album with over 3.5 million sold to date worldwide. The album marks Timberlake with the biggest male début in five years as well as the biggest digital début in U.S. history by a male artist.

The 20/20 Experience UK and European Tour
(*All dates and venues below subject to change. Additional dates to be announced.)

Ed is an entertainment news writer, and founder of TOMORROW'S NEWS. He always keeps a watchful eye on who and what's trending in the entertainment world. His articles focus on tomorrow's news today, including celebrity news, film news, music news and so much more!
NEWER POSTTHE HOBBIT: THE DESOLATION OF SMAUG – Trailer #2!
OLDER POST‘DON JON’- A Movie Your Nan Might Want To Skip!