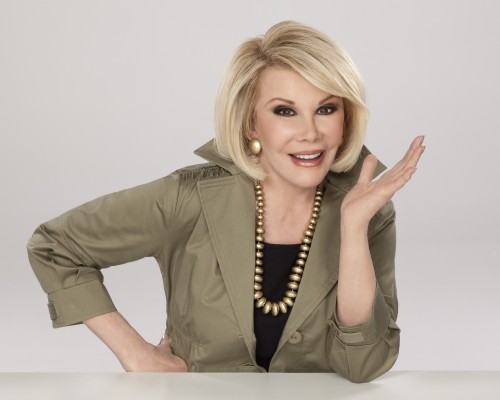 Joan Rivers is due to appear on the upcoming new series of ‘Celebrity Apprentice‘ after filming two episodes of the show as Donald Trump‘s advisor before she passed away.

The late comedienne, who died last week (4th September 2014) aged 81, filmed two episodes of the NBC reality TV show and Trump admits she was “great” on the programme – which a return date hasn’t yet been set for.

It will not be the first time the late star has appeared on the show, after having triumphed on the programme in 2009.

Joan won season eight with her daughter Melissa Rivers, beating off competition from the other celebs such as Khloe Kardashian and former basketball star Dennis Rodman. She also appeared in the 2012/2013 season of the ‘All-Star Celebrity Apprentice as a guest judge.

Joan Rivers passed away after falling into a coma in hospital, where she had been admitted for a throat procedure.

Ed is an entertainment news writer, and founder of TOMORROW'S NEWS. He always keeps a watchful eye on who and what's trending in the entertainment world. His articles focus on tomorrow's news today, including celebrity news, film news, music news and so much more!
NEWER POSTSIMON KINBERG On STAR WARS REBELS And EPISODE VII
OLDER POSTANNIE LENNOX Hints New Album May Be Her Last!