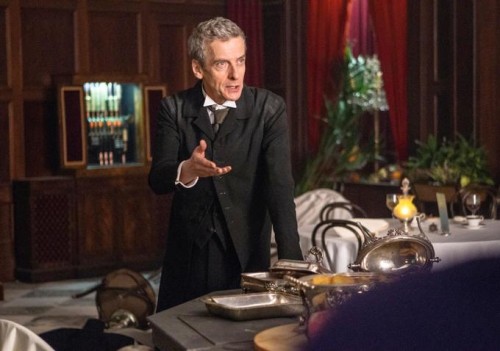 I have to say I had my reservations about Peter Capaldi taking on the role of the Doctor. His grizzled old face is so different to the boyish Matt Smith, and he’s Scottish – as was David Tennant, but Tennant spoke with a cockney accent. Oh I know what I mean. I always think Capaldi has a face fit for playing a baddie, and so to convince us he’s the Doctor who has only good intentions in his hearts, would be difficult. However, the whole feel of the new show was darker and at times reminded me of the Baker-era Doctor Who. The people with half faces actually scared me a little and there was not one episode in the Tennant/Baker years that scared me.

The whole thing feels like it’s been rebooted, even down the excellent new opening with lots of clocks, emphasising the whole time theme. Time seems so evident in this series of ‘Doctor Who‘, the way the Doctor is now a middle-aged man, the fact that the first episode was set in another time – the Victorian era. Madame Vestra, one of my favourite characters, was central to the story, and of course the Daily Mail readers were kicking off about the whole lesbian issue. It’s the twenty-first century for God’s sake people. Children are perfectly aware that there are gay people out there. No one mentioned the fact that the episode ended with the Doctor murdering a man.

I thought it was clever the way that the Doctor stumbled around like a newborn, not aware of who he really was, why people were talking in strange accents, and being freaked out by his new appearance. In comparison, when Smith emerged from Tennant, he was filled with the cockiness of youth, unfazed by the change and eager to get going. In truth, the older you get, the less you realise you know, so it was accurate that the new Doctor would react in this way.

My one criticism is that as a writer, I know, if you have a couple of different things on the go at once, sometimes things can bleed into each other and you have to work hard to keep them separate; and the interplay between Clara and the Doctor in the faux Italian restaurant sounded as though it was discarded dialogue from the ‘Sherlock‘ episode ‘The Empty Hearse‘ -when Sherlock re-enters Watson’s life. Close your eyes and it’s Martin Freeman speaking like a Lancastrian girl and Benedict Cumberbatch has become a gravelly voiced Scot. Steven Moffat needs to create a wider division between the two shows, as fabulous as they are. Anyone who watched ‘The Sign of Three‘ will recall the whole wedding speech could have been delivered by Matt Smith in exactly the same fashion. Yes the Doctor and Sherlock are both eccentric geniuses, but the shows are different beasts and should stay that way.

But, despite this, I was pleasantly surprised by how much I enjoyed ‘Deep Breath‘, and there is something compelling about Capaldi which makes you keep watching him. Some people are already lauding him as one of the best Doctors ever. I won’t jump to such assumptions yet. The jury’s out, but the evidence so far is promising.

Oh and the weird woman at the end…my money’s on it being River Song. 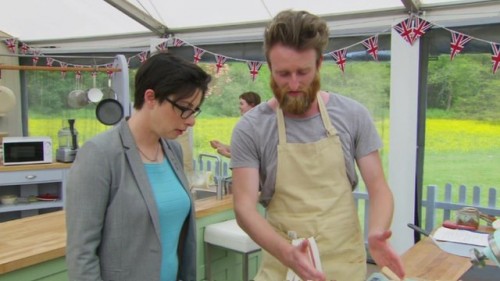 Young radicalised men are travelling to the Middle East ready to launch holy war. Russia is making its way into Ukraine, which could possibly lead to World War Three, and what makes the front pages of the newspapers? An elderly woman taking ice cream out of a freezer for forty seconds – whoooh!

This certainly was a controversial week for ‘The Great British Bake Off‘, when our competitors had to make a baked Alaska with ice cream made from scratch, and poor Iain made a revolting ice cream with black sesame seeds, which made it look like concrete, and annoying Diana objected to him using her and Nancy’s freezer and took it out.

Now, I sit on the fence here, because I do find Diana supremely irritating and I wouldn’t put it past her to throw a tantrum and do something like this. But she is insisting that it was down to bad editing and that she took the ice cream out for a matter of seconds. In all fairness to her, Iain did behave like a giant toddler throwing a tantrum. I would have feigned illness, ran out the tent and surreptitiously got a tub of Ben and Jerry’s to pass off as my own! Instead he threw it into the bin and refused to even try and rustle something up, so naturally he had to go. But, in a further development – dum dum duuum – Diana became ‘ill’ prior to filming episode five so she won’t be in the series any more. I say bring back Clare from episode one in her place and give her a chance to make things not involving Chocolate which looks like dog poo.

I found it a bit puzzling that this week was called ‘dessert week’. To me, cakes are desserts, but I guess I’m just not very posh. If boring Norman doesn’t go next week I’ll create a controversy! 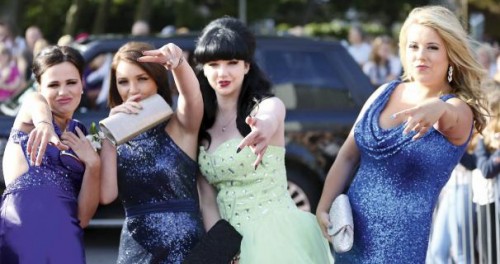 When I went to school, all ‘prom’ meant to me was what happened at the end of ‘Carrie‘, when she ended up with a bucket of pig’s blood over her head and unleashed her powers. We never had such an extravagance, and if we had, I would have attended mine dressed like Morrissey – complete with gladioli, just to make a statement (and quite frankly, I was a brat). Now most secondary schools have proms for those kids who have reached the end of year 11 (5th year in my day) and the little darlings are expected to turn up looking Oscar-ready, arriving in sports cars, tanks or even helicopters.

This rather sweet programme followed a group of young people who were gearing up for their prom. There was Chanel, whose single mum couldn’t afford to buy her one of the grand four hundred pound dresses, and who ended up in a high street buy but looked a million dollars. There was Ben who was Joey Essex aged sixteen, whose attendance at the prom was in jeopardy given his tardy behaviour. Ben was a loveable rogue who seemed more interested in the prospect of turning up at the prom in a sports car than the lure of perhaps getting off with some sixteen year old girl who was dressed like a forty-year old woman.

Then there was Callum who was organising a ‘prom-posal’ to ask Beth, the object of his affections to go to the prom with him. The proposal, complete with banners, American cop cars and middle class ladies from Sussex pretending to be some downtown LA policewoman, was something dreamt up in the head of Simon Cooper in ‘The Inbetweeners‘. Of course, in ‘The Inbetweeners‘, Jay would end up getting involved and would surreptitiously change the banner so it included the word ‘clunge’, but no such horrors befell Callum, and Beth agreed to go with him. Although we discovered at the end of the evening, that no romance had come from it. Ahh.

Most touching was Matt, a very brave young man who did not let his disability hold him back. Not only did he play wheelchair football, he also didn’t let the prospect of turning up to his prom in a camper van hold him back. He was voted prom king at the end and quite rightly too.

To hark back to my ‘Doctor Who‘ review. The thing that made me gently chuckle was all the teenager’s assumptions that now they had left school, their childhoods were over. I can remember feeling exactly the same way, and knowing I now had the right to leave home and earn money full-time, made me feel somehow invincible. As a wise old owl, I could only watch and think to myself that their proper learning only begins now. A bit how passing your driving test doesn’t automatically make you a driver.

As to the whole prom thing, I think it’s quite ridiculous that young kids not only have the pressures of GCSEs to cope with, they’ve also got to plan some grand entrance to a glorified party, bankrupting their parents in the process, just so we can keep up with our American cousins. What next, six-year-olds having guns? McDonald’s selling Twinkies?

Karen Mason is a London-based writer. She has published fifteen historical fiction novels and is currently working on her sixteenth. She is also an avid movie goer, with a particular preference for gritty British cinema and a weakness for Jason Statham films! Her music tastes stretch from Muse to the Cinematic Orchestra and she loves discovering new acts.
NEWER POSTJOSS STONE Asks Fans To Design Her Upcoming Album Cover!
OLDER POSTTHAT WAS THE BOX – August 2014 (Week Three)