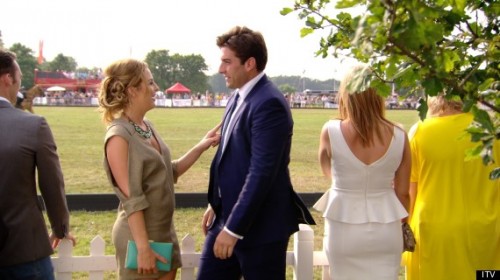 Danielle reckons that she went to university and yet she thinks lemurs – the little furry animals, are actually Libras – as in the starsign. Now I’m sure there are little lemurs born between September 22nd and October 23rd, but if I was Danielle I would ask for my tuition fees back. And what is it with the youngsters on ‘TOWIE‘ and their dates at the zoo? Not that there is anything wrong with going to the zoo, but these are girls who won’t go and pick up a pint of milk without applying two layers of fake tan and three pairs of lashes. Surely a night down at Faces would be more appropriate?

Other observations this week;

Caveman Elliot and Chloe have matching teeth, and Ferne is right, Elliot does have botox. I also think Ferne and Elliot fancy each other. There are more sparks between them than there are with their other halves. Chloe and Elliot’s relationship is as cold as Stephen and Kimberley in ‘Big Brother‘. I can’t believe they’ve been together six weeks and are already looking at houses. And seriously, how can they afford the sort of mansion they were looking at? Are things in Brentwood still at 1974 prices?

Fran, Georgia and Grace had an argument seemingly about nothing, which continues to be about nothing and is extremely boring. And Grace had a makeover which left her looking exactly the same as she did before. But it is quite fun that she was the one playing Lewis, when for so long ‘TOWIE‘ has just concentrated on the boys cheating and lying.

Chloe’s salon looks like a laboratory from a science fiction film.

Arg and Lydia are flirting up a storm and I can’t believe she’s willing to go there again. I think it’s a showmance, but Arg’s eyes do light up when he talks to her, so I don’t know… I also can’t believe she gave him a driving lesson in her brand new Merc. Who honestly does that?

Ferne has her blusher applied by Aunt Sally.

Whose clothes were being modelled at Vas’s fashion show? Most of the outfits looked like things my nan would have worn. Now he has fallen out with Danielle because she doesn’t appreciate high fashion. No, perhaps she has no desire to dress like a sixty five year old!

Harry and Bobby have finally split up, and Gemma chose to go to a barbecue at Harry’s house and eat his egg mayonnaise and this has pissed Bobby off. Honestly, if I fell out with one of my friends as often as Bobby falls out with Gemma, I would cut my losses and run. Those two couldn’t agree on what day of the week it was. 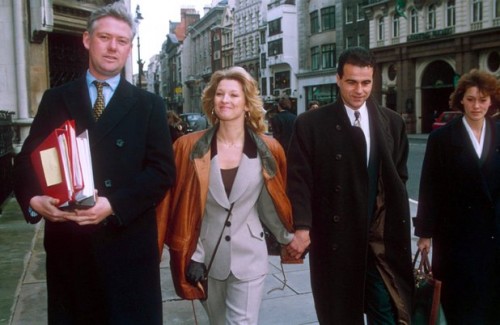 In an age when ‘Big Brother‘ contestants openly have sex on camera, and the likes of Katie Price think nothing of revealing intimate details of their love-lives (see Alex Reid and the vodka bottle) it seems strange to think that just twenty years ago, to be accused of giving oral relief to your long-term partner and father of your child, on a motorway slip-road, was considered to be an abomination and a sure-fire way to ruin your career. This is what happened to ex-‘EastEnders‘ actress Gillian Taylforth when she was stopped in her car in 1992 on the way home from Royal Ascot. She claims she was giving her other half – Geoff Knight, a tummy rub because he was suffering from pancreatitis. The police officer who stopped them claimed she was giving him a more intimate form of assistance.

Whether or not the former Kathy Beale was up to shenanigans with Mr Knights, what was so appalling about the re-enactment of the trial where she took The – ever-so-sanctimonious – Sun to court for libel is how a woman’s past can be dredged up and used against her. The fact that Gillian Taylforth made a video several years prior to the incident, where she is mucking around with friends, pretending to give oral sex to a bottle and a German sausage, was somehow indicative that she was some sort of exhibitionist who would be willing to perform an indecent act upon her husband in public. It clearly shows how a rape victim would be treated when whatever she had done in her past, would be used as evidence of her conduct in the present.

I still don’t know who was telling the truth, but after all that has come out about The Sun since then, makes it hard to believe anything they say. Also amusing was John Sessions’ portrayal of George Carman QC, who seemed to take great pleasure in his descriptions of sexual acts. My one criticism was that they could have at least made it authentic and had the jury look as though they were back in the early 1990s. Also funny was the way it kept cutting to the Asian juror who would roll her eyes whenever something rude was mentioned.

This was typical Channel 5 salaciousness, and I think they should have used a more formal narrator than Keith Allen, but it was an interesting reflection on how our morals have changed, and what was considered career-ending in 1992, would get you a place in ‘Celebrity Big Brother‘ today. 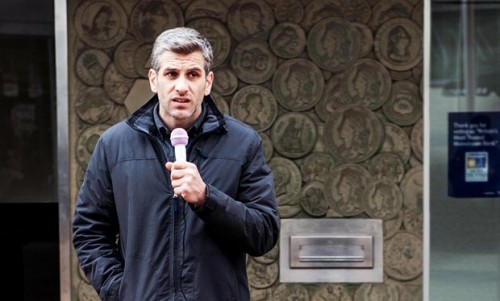 I didn’t see the first series of ‘The Mimic‘. I don’t even remember it being advertised. But with a ‘Cardinal Burns‘ and ‘Badults‘ shape hole in my comedy week, I decided to give it a go. It’s a strange little show about a guy who has quit his job to become an impressionist, but his slacker attitude stops him getting anywhere. Not your usual concept for a sitcom, I have to say.

Terry Mynott, who plays Martin, the lead character, is handsome in a sort of craggy way and has the sort of face which makes you root for him straight away. He drives a crappy car and lives with his rather nutty landlady, with whom he shares a weird sexual tension. In the opening episode, his long-lost son, who has been acting as his agent, has gone travelling and so Martin employs his friend Neil as his agent. Neil gets him a gig busking in the town centre, which is not the most obvious place for impressionists to do their thing. Needless to say it all goes horribly wrong.

‘The Mimic‘ isn’t as bombastic as the usual Channel 4 comedy, and take out the swearing and it could easily be a cosy, gentle BBC sitcom shown before the watershed. I will certainly check out the first series and I’ll stick with the new series, as I think it has potential, even if it’s never going to be laugh out loud funny.

Karen Mason is a London-based writer. She has published fifteen historical fiction novels and is currently working on her sixteenth. She is also an avid movie goer, with a particular preference for gritty British cinema and a weakness for Jason Statham films! Her music tastes stretch from Muse to the Cinematic Orchestra and she loves discovering new acts.
NEWER POSTTHAT WAS THE BOX – July 2014 (Week Four)
OLDER POSTTHAT WAS THE BOX – July 2014 (Week Two)